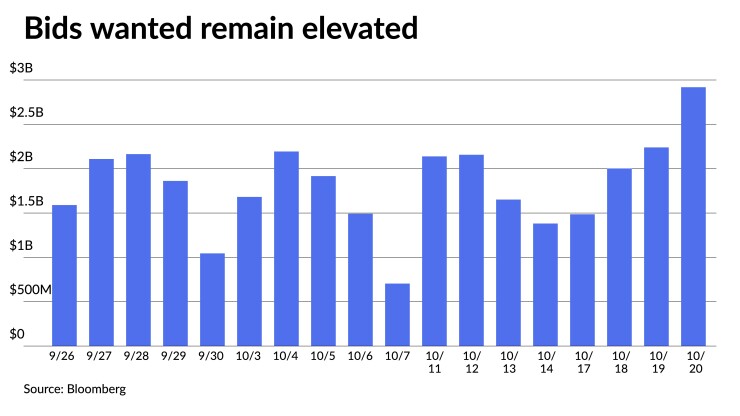 Municipals sold off Friday with losses of up to 18 basis points, with the damage felt across the curve, and the 30-year triple-A yield closed just shy of 4%. U.S. Treasuries ended mixed after the 10-year rose to levels not seen since 2007 earlier in the session, and the reversal led to an equity rally to close out a tumultuous day and week.

Triple-A yields rose 10 to 18 basis points, moving the entire curve above 3%. Short UST made gains while the long bond saw losses of up to 11 basis points.

Bid list tallies have had only one day this month below $1 billion par but otherwise averaged $1.8 billion, a 50% increase from all of 2022, noted Kim Olsan, senior vice president at FHN Financial.

“A combination of cash raises and tax swaps appears to be behind the increased volume, but without the expected yield rise that would typically accompany such high levels,” Olsan said Friday morning.

While municipals outperformed UST, Friday saw munis catch up and yields rose. Before Friday, over the course of the last week, generic 10- and 30-year AAA spots traded in a narrow three to five basis point band — as compared to USTs with a 20-30 basis point range.

The 10-year eclipsed 2007 highs earlier in the session Friday before reversing a selloff.

“Those two months in history were occupied with seminal events: in October 2008, the US enacted the Emergency Economic Stabilization Act of 2008 and bailed out large banks in the aftermath of the Lehman Brothers collapse, and in August 2011, S&P downgraded the US’ credit rating for the first time to AA+ from AAA during the 2011 debt ceiling crisis,” they said.

They noted that today’s environment is different, but “certainly requires precaution” as they believe “something will break” given rising rates.

BofA strategists also said, “many muni bond indexes are rolling back 14 years’ worth of price gains in just 10 months.” For instance, the ICE BofA Muni Master index price returns since September 2008 is -9.65%.

“While markets across the board are waiting for something to break, it is also worth thinking about whether the Fed will be deterred if something does indeed break,” they said. “Given the recent UK/BOE episode, there is no clear answer.”

However, for munis, they said there is some comfort market risks “appear somewhat lower than most markets, as shown in October muni price action so far.”

Barclays strategists Mikhail Foux, Clare Pickering and Mayur Patel said munis had outperformed USTs “despite a sizable new-issue calendar this week consisting of a number of large taxable and tax-exempt deals; although today tax-exempts have finally come under pressure.”

Tax-exempt yields were several basis points higher this week, as of Thursday.

“With yields of the long high-grade muni index getting close to 5%, the highest level since mid-2013, there is a number of quality 5s that could be bought at par or even at a small discount to par, which should attract a lot of interest from retail,” Barclays strategists said.

Institutional total return investors may even “be incentivized to put some money to work at current yields, although tax-exempts do not look overly attractive versus Treasuries,” they said.

They noted this market technical should provide some support for the long end.

“The front end of the curve (3s10s) is extremely flat now, but the long end still has good value despite some flattening in the past several weeks,” Barclays strategists said.

“Investors might be a little cautious near term in light of the upcoming midterms,” they said. “A blue wave scenario would likely push muni yields meaningfully higher but, at current yields, we think there is rather good value in tax-exempts for investors.”

“Taxable muni spreads are quite rich versus corporates; the spread differential between the two indices is at its two-year highs versus high grade corporates (making taxables very rich by comparison),” they said.

This week, several large taxable muni deals came to the market and have been “well-received by investors despite rate volatility, mainly due to scarcity of supply,” according to Barclays strategists.

Calendar grows
Investors will be greeted Monday with a new-issue calendar estimated at $8.640 billion.

There are $5.560 billion of negotiated deals on tap and $3.080 billion on the competitive calendar.

The new-issue calendar is led by the New York City Transitional Finance Authority. The authority will price $950 million in one deal in the primary market and sell $350 million in two deals in the competitive market.

Issuance in 2022 and beyond
Issuance in 2022 “is greatly distorted by a very difficult environment with an ever-elevating Fed hawkishness, rapidly rising interest rates and large outflows from mutual funds,” said BofA strategists.

If the current market environment continues for another month, ”2022’s issuance is likely to come in even lower than our twice-revised $420 billion target.”

New-money issuance volume, though, should still end the year with 3%-4% growth over 2021’s, while refunding volumes decline will be more than 50%, they said.

BofA strategists expect 2023 to “be a much friendlier year as the Fed is expected to wrap up its intensive tightening program in the first few months, and eventually begin an easing cycle later in the year during a prolonged recession.”

“Investor demand should rejuvenate as such high yields were rarely available in the past decade,” and demand for new financing from muni issuers “should see large growth, while refunding should rise above this year’s dismal levels,” BofA strategists said.

They preliminarily predict total issuance for 2023 will be $500 billion, consisting of $380 billion of new money and $120 billion of refunding.