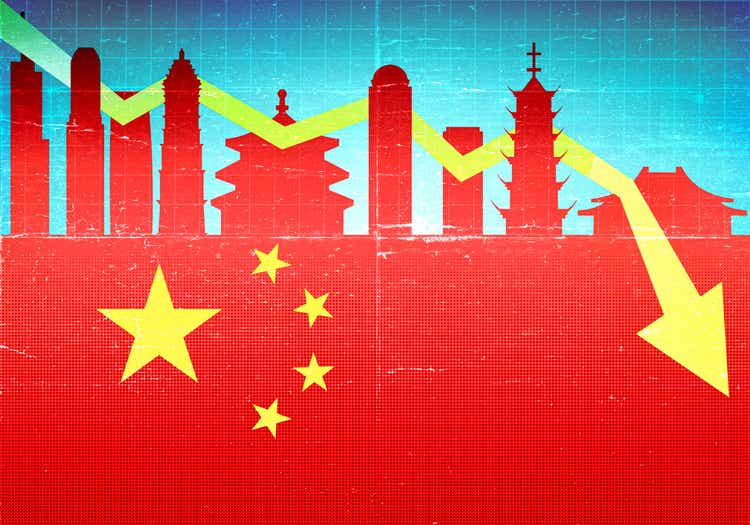 As the name suggests, the iShares China Large-Cap ETF (NYSEARCA:FXI) offers investors access to a portfolio of large-cap Chinese stocks; to be more specific, the product focuses on 50 of the largest Chinese stocks that are listed on the Hong Kong Stock Exchange.

FXI has continued to bleed for much of this year, and over the last month or so, the losses have only intensified with the product underperforming the popular emerging markets ETF – iShares MSCI Emerging Markets ETF (EEM), by a factor of 1.8x (note that Chinese stocks have a 30% weight in EEM).

Some of the important cogs of the Chinese economy continue to be overwhelmed by challenges. Consider the real estate sector, which accounts for a fifth of the total GDP (Source: IMF) and 40% of household assets (Source: Bloomberg).

Home construction continues to slide yet again as developers there seem to be in a bad way. 33% of the 70 Chinese cities surveyed by the statistics bureau have seen both monthly and annual declines in new home prices between June and August. The IMF believes that if the inventories of the Chinese developers were to be marked to market, close to 45% of the developers would fail to cover their interest costs, with another 20% of them going bankrupt. The weak financial dynamics have also translated into sliding home construction activity, resulting in a growing chunk of Chinese homeowners refusing to make mortgage payments until construction is completed. You can imagine how poorly this will reflect on the asset quality of Chinese banks, which are believed to have 20% exposure to mortgages according to the IMF. These banks also have another 8% exposure to property developers. The whole thing comes across as a giant quagmire of sorts, and it remains to be seen what the government will do to address these issues.

Plenty of ambiguities also surround the Communist Party’s ongoing twice-a-decade congress meet, which has kept investors on tenterhooks. Firstly, stakeholders are split over whether further stimulus will be announced and to what degree. Secondly, there appears to be a reshuffling of the top bracket of the Communist party with changes expected in the Politburo Standing Committee, as well as wide changes in the Central committee. It also remains to be seen who will take over the position of Premier from Li Keqiang; this will be a crucial appointment as the Premier tends to be very instrumental in driving the country’s economic development. So far, there’s been limited clarity as to who’s going to nail those important posts.

Crucially, there’s also something of a widening trust deficit going on between investors and China on account of the delay in the official GDP announcement (no future date has been provided). It’s one thing to just have a series of negative data points that don’t reflect well on the economy; whereas, it takes some gall to be inconsiderate about official releases when there are so many stakeholders that are dependent on it. Developments such as this will continue to keep foreign capital at bay, as already, a lot of investors had previously thought that the officials were deluded enough to set a 5.5% GDP growth target for the year.

I also think the cloud of deteriorating China-US ties with regard to the Taiwan issue is preventing a lot of bulls from taking positions in Chinese stocks. Next month Xi and Biden are expected to meet in person, for the first time since the latter was sworn in and as things stand, it doesn’t look like it could be an amicable meeting. Recent reports suggest that the US is looking to get into a joint weapon product tie-up with Taiwan; that certainly won’t go down well with China.

Finally, there is also the FX risk to consider; rising US yields have also stimulated dollar-denominated assets, pushing the USD/CNY to its highest point since February 2008.

For all the doom and gloom surrounding China, one also has to wonder if you’ll ever get to pick up the 50 largest stocks in China at such cut-price valuations. The last time, I wrote about FXI it was trading at a weighted average forward P/E of 10.2x, now it trades at just 8.5x. Meanwhile, a portfolio of global stocks, as represented by the Vanguard Total World Stock ETF (VT) trades at a 48% premium, at 12.6x forward P/E. The widening valuation differential between Chinese and global stocks does feel ironic when you consider that this is an economy whose contribution towards overall global GDP is not expected to plateau or decline, but rather grow over the next 4 years, and hit levels of ~20%!

I also believe that those who are fishing for rotational opportunities around the world may have FXI on their watchlist, as its relative strength ratio of 0.3x versus VT, is a long way from the mid-point of its long-term range.

Having said that, I do have some additional concerns about the recent price imprints on FXI’s long-term chart. In my previous article, I’d highlighted how the $30-$52 range had seemed like a reliable range for much of the last decade; in May, it had looked like the ETF had bounced off the $30 level support for the third successive time but to no avail.

This breakdown has emboldened the short-sellers even further; back in July, the short interest in FXI as a % of shares outstanding was 22.9%, and now it is at 24.6%. The glass-half-full brethren may hope for some bottom formation around the 2009 lows which is close to where FXI is currently trading. It would be intriguing to see if FXI can form a bottom at these levels once again, but I do feel that it is a precarious zone to build positions given the ongoing uncertainties surrounding the 20th Party Congress of the CCP. Besides also consider that quite a few leveraged bets (worth $7bn) have recently been taken in Chinese stocks, before the event. If the event turns out to be a damp squib, we could see these positions being unwound with great alacrity. Tread carefully.