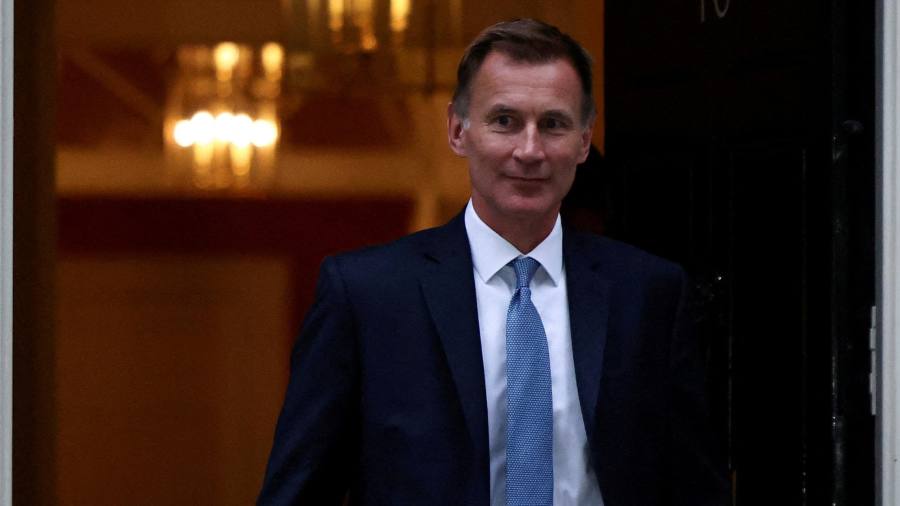 Jeremy Hunt, the new UK chancellor, will on Monday morning “torch” the bulk of his predecessor Kwasi Kwarteng’s tax cuts in an effort to calm markets, with ministers meeting later to discuss new spending curbs.

The Treasury said that Hunt, appointed chancellor on Friday, would at 11am announce plans to tackle the government’s deficit, two weeks earlier than planned, before making a House of Commons statement this afternoon.

Most of the tax measures in the disastrous “mini” Budget of September 23 — apart from a £13bn cut to national insurance and £1.5bn in stamp duty changes — will be “torched”, according to one official briefed on Hunt’s plan.

Hunt agreed to the emergency statement with Liz Truss, prime minister, on Sunday, after concluding the government could not afford another battering by the markets this week.

The government had planned to announce the moves as part of a medium-term debt-cutting plan on October 31. The date had already been moved forward from November 23.

Truss has reversed £20bn of tax cuts since Kwarteng unveiled the “mini” Budget on September 23, which contained £45bn of unfunded tax cuts, but that has not allayed concerns in the markets and gilt yields continued to rise on Friday.

The Institute for Fiscal Studies has said a £60bn fiscal tightening will be required to make the sums add up, implying that Hunt will have to go much further in reversing tax cuts, raising taxes and cutting spending.

A cut in income tax of 1 percentage point next April, costing about £5bn, is expected to be put on hold, but that is only expected to represent the start of another series of U-turns.

Axing plans to reform VAT rules for foreign shoppers, new dividend taxation rates and the IR35 off-payroll system, would save around a further £5bn.

A £13bn cut in national insurance rates, which is supported by the opposition Labour party, is one of the very few measures that is expected to survive. Stamp duty changes worth £1.5bn are already in effect.

On Monday morning the pound extended its gains following the news of Hunt’s planned statement, trading at $1.129 against the dollar — up 1.1 per cent on the day. Sterling was also up 0.8 per cent against the euro at €1.158.

Trading in UK government bonds was due to commence at 8am London time. Gilts had come under renewed selling pressure on Friday, as investors warned that Kwarteng’s sacking and the U-turn on plans to cut corporation tax were not sufficient to restore confidence in British markets.

The 30-year gilt yield ended last week at around 4.7 per cent. Bond yields rise as their prices fall.

Hunt is also expected to announce new spending cuts to help balance the books and put debt on a downward path by the end of the five-year Office for Budget Responsibility forecast period.

Those cuts and “efficiency savings” will be discussed by cabinet ministers at a Downing Street reception on Monday evening and again at a formal cabinet meeting on Tuesday.

The Treasury said on Monday morning: “The chancellor will make a statement later today, bringing forward measures from the medium-term fiscal plan that will support fiscal sustainability.

“This follows the prime minister’s statement on Friday, and further conversations between the prime minister and the chancellor over the weekend, to ensure sustainable public finances underpin economic growth.

“The chancellor will then deliver the full medium-term fiscal plan to be published alongside a forecast from the independent Office for Budget Responsibility on 31 October.”

Hunt met Andrew Bailey, governor of the Bank of England, and the Debt Management Office on Sunday to discuss the plans.

Why Ross Stores Surged Today
Defying forecasts, crude oil prices have wiped out most of this year’s gains and could head lower
Crypto Exchange Huobi Denies Rumors It Will Merge With Poloniex
Mexico Fund: Favorably Positioned
Sunak backs down in battle with Bank of England over ‘call-in power’