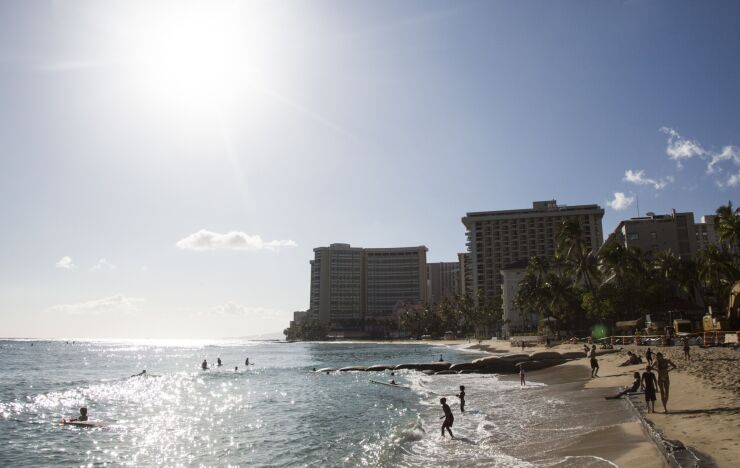 The outlook on Hawaii’s Aa2 rating was lowered to stable from positive by Moody’s Investors Service ahead of an $800 million taxable general obligation bond deal.

It also reflects “our expectation that through careful fiscal management, the state’s financial position will remain healthy and that it will continue to proactively address its social challenges and elevated liabilities over the long-term.”

Hawaii holds an AA rating from Fitch Ratings and an AA-plus rating from S&P Global Ratings. Both assign stable outlooks.

The state expects to take indications of interest for the bonds on Tuesday and hold a formal order period on Wednesday, according to a document posted on the state’s debt management website.

The syndicate selling the bonds will be led by Morgan Stanley as the bookrunning senior manager, BofA Securities and Citigroup as co-senior managers, and Jefferies and RBC Capital Markets as co-managers, according to the document.

The outlook on all of those bonds was revised to stable from positive in a ratings report released Thursday.

The state enacted pension reforms in 2017, and announced in a March report that it has reduced the time to pay down unfunded pension liabilities to 24 years from the previously anticipated 26 years.

“This result is due to gains on the investments of the ERS more than offsetting the liability losses,” according to the state’s actuarial valuation for the year ended June 30, 2021. “Because this period is less than 30 years, the minimum objectives set in State statute are currently being realized.”

The state’s reserves are currently at record levels, Moody’s analysts said, benefitting from the strong rebound of the state’s tourism industry, the availability of federal pandemic aid and stronger-than-expected revenue performance. These strengths position the state to better withstand the high inflation period and global economic slowdown, according to Moody’s.

Moody’s issuer rating also reflects the state’s lagging economic growth and weaker demographic trends in relation to the nation, according to analysts.