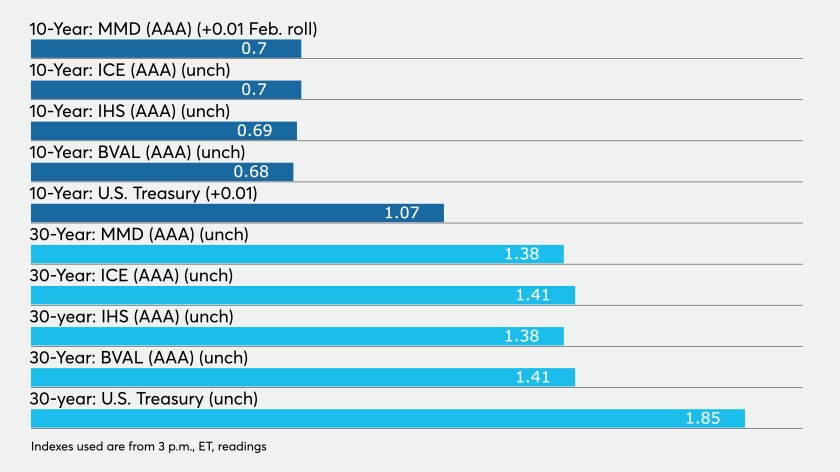 Munis were little changed as a massive snowstorm pummeled the Northeast triggering states of emergency and vaccine cancelations. Trading was quiet and triple-A benchmarks were unmoved even as U.S. Treasuries faded and equities rebounded from losses and volatility last week.

High-yield continues to be sought after as high-grade paper is yielding about 0.70% in 10 years and 1.40% or lower in 30 years and credit spreads continue to tighten in nearly every sector. Positive returns on municipals were seen in January, particularly in high-yields, which returned 2.09%.

Chicago Public Schools’ junk paper, priced on Wednesday, drove down the district’s yield penalties paid in the primary market to their lowest in years, another telling signal that investors are willing to lend to even the highest-risk munis.

Munis in January largely ignored volatility in other fixed income markets and equities. Low yields and ratios have most of the market stuck looking for value, where the better yield opportunities are outside of mainstream names, said Kim Olsan, senior vice president at FHN Financial.

February’s business is set up to be a little different from January, with tax-exempt supply coming via smaller par-value deals. “That is the very mix that can cause distraction to secondary bidsides — and with rates/ratios where they are, some pullback might be expected to find distribution,” Olsan said.

Economic data
Limited data was released on Monday. The Institute for Supply Management’s PMI slid to 58.7 in January from 60.5 in December.

Economists polled by IFR Markets expected a decline to 60.0.

“The manufacturing economy continued its recovery in January,” noted Timothy Fiore, chair of ISM’s manufacturing business survey committee. “Survey committee members reported that their companies and suppliers continue to operate in reconfigured factories, but absenteeism, short-term shutdowns to sanitize facilities and difficulties in returning and hiring workers are continuing to cause strains that limit manufacturing growth potential. However, panel sentiment remains optimistic.”

The Tarrant Regional Water District, Texas, (/AAA//) is set to sell $299.4 million of taxable revenue bonds by competitive bid at 11 a.m. on Tuesday.

Gary Siegel contributed to this report.