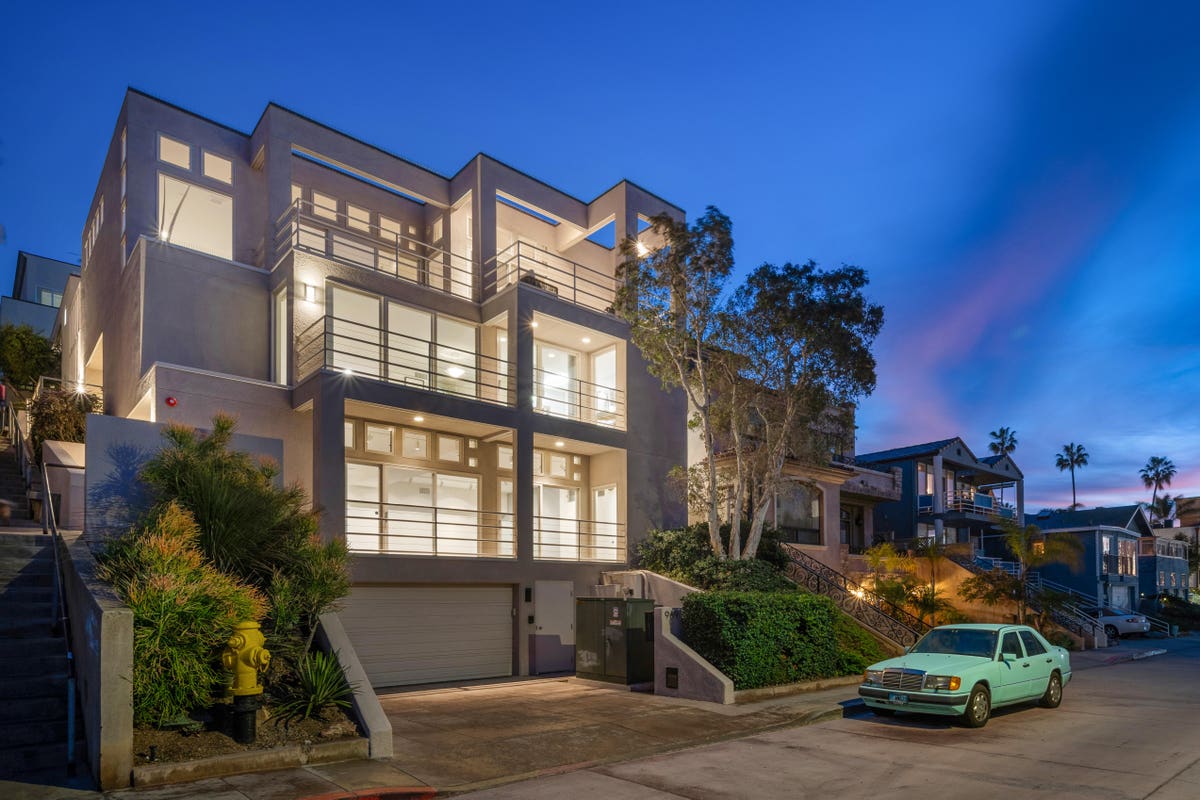 Designed by a celebrated modernist for a titan of San Diego’s art scene, it’s no surprise that this modern residence off the coast of La Jolla is something of a masterpiece in itself.

Listed for $6.998 million, the sophisticated property was the longtime live-work residence of Faiya Fredman, the late contemporary artist known for her experimental approach that often teetered on the cutting edge of new and unusual techniques and mediums.

Located about a block from the ocean, the box-like residence was designed and built in 1988 by Homer Delawie, the master architect behind several San Diego’s modernist landmarks. The property is made of two units — two residential levels, including a separate two-bedroom apartment, and another for work or a studio.

Listing agent Drew Nelson of Willis Allen Real Estate said that of the few live-work residences in La Jolla Village, the property at 969 Coast Boulevard is the ultimate.

“The flexibility of use is just incredible,” Nelson said. “When you add in the views, the architecture — it’s a combination of features that can’t be matched.

Entered through a skylight-topped corridor, the 5,600-square-foot home opens to a white-walled living room featuring gallery walls and wide-plank wood floors. Expanses of windows and glass doors look out onto terrace space and take in ocean views from its lofted perch.

A chef’s kitchen with an impressive chrome range, a dining area, three bedrooms and 2.5 bathrooms complete the main living space. The apartment, which sits between the upper residence and lower-level studio, adds another two bedrooms and two bathrooms. Below the multi-level structure is an enormous subterranean garage.

Tim Nelson, who shares the listing, said that it would be almost impossible to replicate a project of this scope and magnitude in today’s landscape.

“In this day and age, the cost of construction on an extremely sloped lot such as this would probably cause a lot of people to steer away from it,” Tim Nelson said. “Given its current configuration, this property represents an incredible opportunity, particularly when you look at the architectural landscape and the scarcity of land with the underlying zoning on which you could build something similar.”

Another underlying issue in the coastal community is a severe lack of inventory. Tim Nelson noted that La Jolla would usually have some 200 or more detached listings in a regular, balanced market. Today, there are under 100 active listings for single-family homes.

“The current market right now is historically undersupplied,” Tim Nelson said. “There is an insatiable demand right now for La Jolla real estate, particularly properties in the Village area with views and walkability.”

In other words, expect to see a similar seller’s market this year to that of 2020.