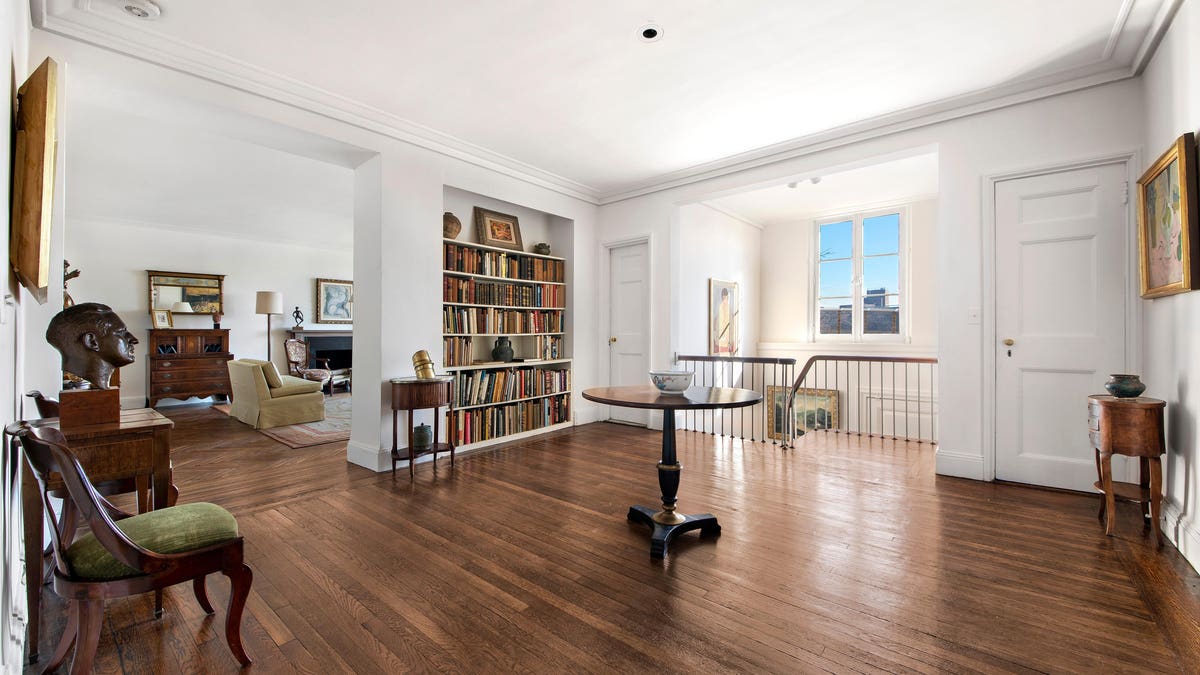 This grand apartment at 1 East End Avenue offers a coveted combination of classic pre-war details and panoramic views of the Yorkville waterfront.

Encompassing two levels in a full-service building dating to 1929, the residence features handsome wood floors, recessed ceilings trimmed with delicate molding and enough built-in bookshelves to satisfy even the most voracious of readers. Sweetening the offering is a private entrance, allowing for easy access to the adjacent riverfront.

On the main floor ware living and dining rooms, a kitchen, a laundry room and bonus/staff quarters. Herringbone-patterned hardwood floors stand out in the living room, as does a fireplace with a dark surround. In the kitchen, blue-hued countertops pop against white brick walls and cabinetry.

A graceful curved staircase lined with slender balusters leads up to the second floor, where there are three bedrooms, each taking in views of the East River and Roosevelt Island. There are two additional fireplaces on the upper level including one in the primary bedrooms, which also incorporates a sitting area.

Priced at $2.5 million, Maisonette 1C is listed with Harriet Kaufman of Warburg Realty, a founding member of Forbes Global Properties.

One of the more affordable areas on Manhattan’s Upper East Side, Yorkville is a walkable, self-contained neighborhood situated between 79th Street and 96th Street, and from the East River to Third Avenue.

In Dember, there were 53 transactions in the neighborhood resulting in a median sale price of $891,607, a 7.7% increase from the previous year, according to UrbanDigs. Of those transactions, 6.3% sold for over the asking price while the median discount was 7%.

In December, contracts increased 52.8% year-over-year, up to 55, though the number of deals inked month-over-month saw no change. The median price per square foot in December was $1,078, down 10.8% year-over-year.

Although supply in January was down about 8.8% from December, the 333 active listings represent a 15.6% increase year-over-year. The number of pending sales also points to signs of an area reinvigorating; as of this week, there are 183 listings in contract, a roughly 103% increase from the same month last year.