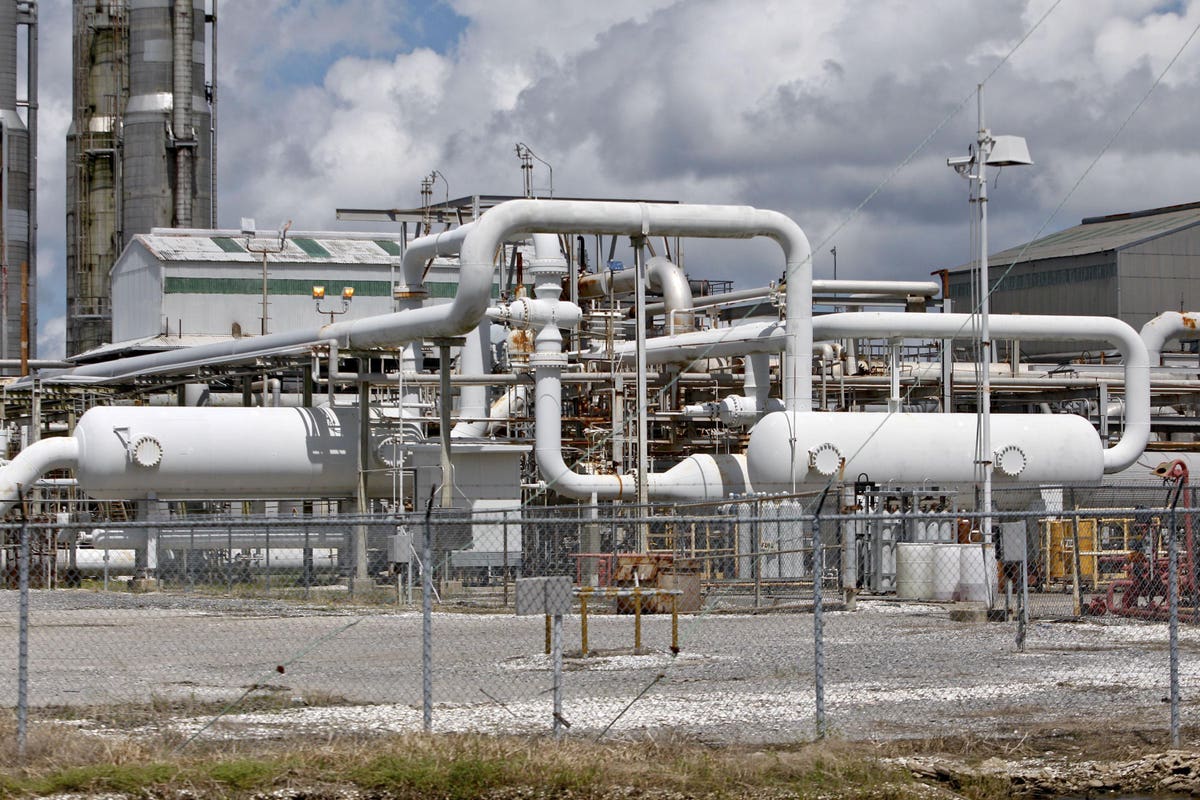 Master limited partnership investors are going to get a 20% deduction. How does it work?

Good news for income investors: The tax treatment of energy partnerships, already pretty good, just got better. This essay will explain how these investments are taxed, and how the new 20% deduction for pass-through business income will affect them.

MLPs are strange entities that act like corporations but are taxed like partnerships. They can be involved in finance or real estate, but the big money is in the transportation of fuel. The largest MLPs own pipelines, tankers and storage tanks.

Partnership shares create quite a headache at tax time, but investors tolerate the pain in order to land fat payouts. Magellan Midstream Partners (ticker: MMP) is an example. This firm connects refineries to railroads and gas stations. It has doubled its dividend in the past five years, to an annualized $3.68, which represents a 5.5% yield on the recent $68 share price. Enterprise Products Partners (EPD), a diversified giant in fuel handling, aims to pay a $1.73 dividend this year. That is 6.5% of the $27 price.

A few more MLPs worthy of your attention will be cited at the end. For now, suffice it to say that the sector is high-risk, high-yielding and tax-favored.

In your early years of ownership, your payouts will be mostly tax-sheltered by the MLP’s depreciation deductions. Eventually, the deductions may wear thin and you will probably wind up with taxable income. That’s where the new tax law comes into play. For tax years 2018 through 2025 it will knock 20% off the income figure on which you owe taxes. There’s no guarantee that Congress will extend the break.

The law also delivers a 20% cut in the boomerang tax that hits you when you exit an MLP. I’ll explain that beast further down.

The explanation here is based, in large part, on insights given to me by two experts at PricewaterhouseCoopers, an accounting firm that generates K-1 tax reports for MLPs and also advises MLP funds.

My sources are Beth Savino, a partner in the firm’s wealth management practice who leads the ETF group, and Joseph Diangelo, a tax partner in the same industry group. They caution that the examples of MLP taxation set out here are, necessarily, simplifications of a very complex accounting problem. Nuances are consciously omitted.

We’ll start by setting out six principles of publicly traded partnerships, then apply those to some hypothetical investments resembling what you’ll encounter if you own MLP shares.

#1. Partnerships are pass-throughs. They don’t pay corporate income tax. Instead, they pass through profits and losses to you the partner. Your share of the taxable income flows onto your 1040 whether or not you get any cash income from the company.

#3. Losses are suspended. As long as you still own any of an MLP, you usually can’t use its losses to offset your salary or even to offset profits from another MLP. The -$2 in the preceding paragraph goes into a storage tank and becomes useful later.

#4. You don’t owe tax on distributions. Instead, the distribution reduces your “cost basis.” A cost basis is, abstractly, a measure of how many chips you have on the table. Invest $40, get $3 back, and you’ll have $37 of cost basis.

#5. When you sell, it’s not your purchase cost but your cost basis that matters. Proceeds less cost basis equals gain.

Now let’s apply those rules to some sample MLPs. They are imaginary, but they resemble real-life energy sector shares. In all these examples we start with the purchase of one MLP share for $40, and assume the MLP pays out $3 a year. The arithmetic disregards state income taxes and the 3.8% Obamacare tax on investment income.

Example 1. The MLP runs a cash profit of $3, which covers the dividend. But because of $3 a year in depreciation write-offs it can tell the IRS it’s just breaking even. Then your taxable income will be zero. Your dividend is 100% tax-free—for now. The $3 is considered a “return of capital.”

After three years of this you have had $9 of capital returned to you. That causes your cost basis to shrink to $31. (You anted $40 for the poker game and then pulled $9 of the table.)

Now suppose you sell for $40. On your brokerage statement you see no gain. But you’ll get a K-1 from the MLP saying you have $9 of gain: $40 of proceeds minus $31 of cost basis.

How is that $9 taxed? In this simplified example, the entire $9 is recaptured and taxed at the ordinary income rate. We’ll call this a boomerang tax.

Unfair? Not at all. If you buy and sell a share of Wal-Mart for $40, and collect $9 of income in the meantime, you’re going to be paying tax on the $9. Wal-Mart dividends, by the way, get a maximum 20% federal rate that MLP dividends do not; but then Wal-Mart has to pay corporate income tax, while the MLP does not. Add up the pieces and you find that pipeline profits are more lightly taxed than retailing profits.

Back to the $40 MLP: With the Trump tax cut in play, you get a 20% deduction from the $9, so your taxable income is only $7.20. So long as your sale of the MLP share occurs after 2017 and before 2026, the 20% pass-through deduction is usable against MLP operating income and recapture income. The recapture can relate to depreciation bonanzas enjoyed years ago.

Example 2. Same as Example 1, except that you sell for $50. Your $19 gain over your cost basis consists of $10 of long-term capital gain (taxed like the gain on any other stock’s appreciation) plus $9 of recapture (which results in $7.20 of income taxed at ordinary-income rates).

Example 3. You sell for $35 after three years of $3 payouts. It appears that you have a gain of only $4 above your $31 cost basis, but, depending on what’s going on inside the MLP, you might well wind up with more than $4 of recapture. In the worst case you have $9 of ordinary income (before the Trump haircut) and a $5 capital loss.

Example 4. You hang in for 13 years, then sell the MLP share for $30. You’ve enjoyed $39 of depreciation-sheltered dividends and your cost basis has shriveled to $1. But recapture, harsh as it is, has this respite: It cannot exceed the proceeds of a sale. So you’d have, at worst, $30 of recapture coupled with a $1 capital loss. You’d owe tax on 80% of $30. The capital loss might be of value to you elsewhere on your tax return.

Example 5. Now we’ll assume that your $3 is more than covered by depreciation in your first year. If the depreciation deduction is $5, the net income reported in Box 1 of your K-1 will be -$2. You can’t immediately use that $2 loss to offset income elsewhere. It goes into a suspension account. It gets liberated from suspension when you either have income from this same MLP or you sell out of the MLP completely.

In year two, let us suppose, there’s no depreciation left to claim and your K-1 reports a Box 1 taxable income of $3. Remember, it’s Box 1, not the dividend, that will find its way onto your tax return. You’d owe tax on $3 of ordinary income but for one thing: You have that suspended-loss account to help you out.

The suspended loss is liberated to erase $2 of your taxable income. Result: In year two you have a net $1 of ordinary income. After the Trump haircut you owe tax on 80 cents.

What’s happening to your cost basis? How the numbers work is second nature to an accountant, but a bit baffling to ordinary people: A cost basis is adjusted not just for the money you pull off the table but also for income and loss. Taxable income kicks up your basis. A loss moves it down.

Example 6. Assume a constant $5 a year in depreciation. For three years running you have a $3 annual distribution and a K-1 showing a $2 operating loss. At the end of that year your cost basis is $25 ($40 minus $9 of payouts and $6 of operating losses). Now you sell for $40.

Now for the 20% deduction. Does it apply to the $15 of income reported on the K-1 or to the $9 net? Tax expert Diangelo says the rules are not yet clear. It’s likely, he says, that you’ll be able to claim only 20% of the lower figure. So you’ll owe ordinary-income tax on $7.20.

Example 7. For eight years running you have $3 distributions and $2 operating losses. At that point your cost basis has shrunk to $0.

In year 9 you have another $3 sent to you. (For simplicity we’ll assume the partnership’s operating income this year is $0 rather than -$2.) Here it gets a little tricky. A cardinal rule of investing is that you can’t have a negative basis in anything. If a distribution would sink your basis below zero, the excess is treated as a capital gain.

For year 9 your below-zero-basis distribution causes you to report a long-term capital gain of $3. This gain will liberate $3 of suspended losses, leaving you with a balance of $13 in suspended losses (8 times $2 minus $3) to pull out of your back pocket at a later time.

There are two beautiful things about this aspect of partnership taxation. One is that the excess dollars created by the zero-basis rule give rise to a capital gain but not a recapture. Recapture might make sense, says Diangelo, but that’s just not how Congress wrote the law.

The other is that the $3 of suspended loss liberated by the $3 capital gain does not react with the capital gain in a matter-antimatter collision. Instead, the loss goes on line 17 of your tax return, where it can absorb salary and other ordinary income. The gain goes in with your other capital gains, where it will be taxed at a maximum 20% rate.

Do you want a piece of this interesting sector? MLPs make sense for prosperous investors deploying taxable dollars. (They are not a good idea for tax-sheltered accounts like IRAs.) Do understand that your accountant will charge extra for tangling with the K-1s and the suspended losses. But if you put enough money to work, the tax-favored income will more more than make up for tax prep costs.

Besides Magellan and Enterprise Products, here are some MLPs to consider:

Williams Partners (WPZ, $40). It pays $2.40 for a 6% yield. Says Jay Hatfield, who holds this one in the InfraCap MLP ETF: “It owns the Transco pipeline from Houston to New York, the I-95 of natural gas.”