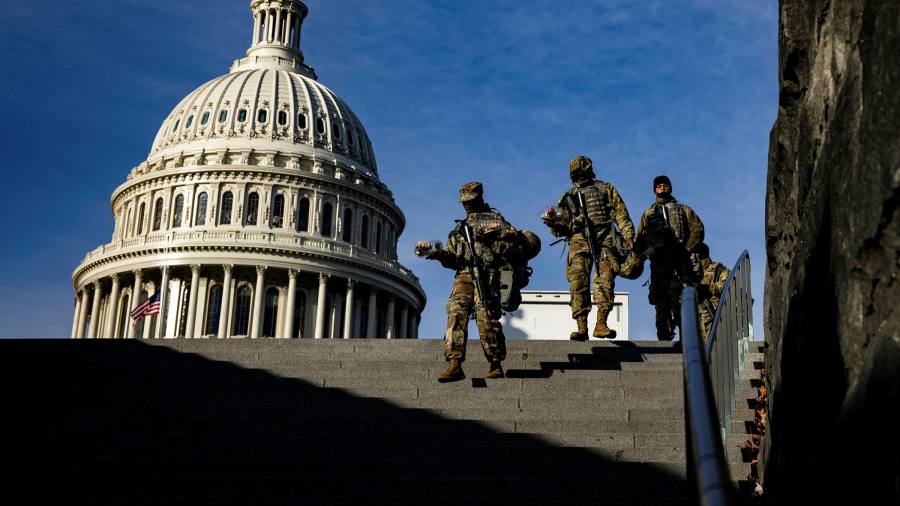 Thousands of National Guard troops were flooding into Washington on Saturday as the capital was fortified for the inauguration of Joe Biden, amid fears of a repeat of the violence that killed five people on Capitol Hill on January 6.

The Pentagon has approved the deployment of 25,000 National Guard troops for the inauguration, while state capitals were responding to an FBI warning about possible armed protests around the US in the coming days.

The massive military presence is making Washington look like a war zone. Muriel Bowser, the Washington mayor, has implemented a state of emergency through January 21, the day after the inauguration.

Washington was bracing for possible violence following the assault on the Capitol by pro-Trump supporters that sparked the second impeachment of Donald Trump.

Much of the capital was boarded up by the weekend, while the National Mall that spans from Congress to the Lincoln Memorial was closed. A metal fence has been erected around the Capitol, while airports were increasing security precautions ahead of the inauguration on January 20.

US media reported that Capitol Police on Friday had arrested a Virginia man who tried to pass through a security checkpoint in downtown Washington with fake identification, a gun and more than 500 rounds of ammunition.

Concern about weapons prompted Facebook to ban advertisements promoting weapon accessories — expanding an existing ban on ads for weapons — and protective equipment “out of an abundance of caution”.

The security preparations — more intensive than for any inauguration in history — have added a surreal dimension to an event which had been dramatically scaled back because of the pandemic. The military presence comes as the Senate prepares to hold a trial to determine if Mr Trump should be convicted of inciting an insurrection.

The outgoing president has refused to attend the inauguration, breaking a long tradition. He will instead depart Washington for his Mar a Lago resort in Florida before Mr Biden is inaugurated before noon on Wednesday. Mr Biden will deliver an address at the inauguration, which will include musical performances by Lady Gaga and Jennifer Lopez.

Ron Klain, the incoming White House chief of staff, on Saturday said Mr Biden would use his first 10 days in office to issue executive orders to reverse actions taken by Mr Trump, including rescinding the Muslim travel ban and rejoining the Paris climate agreement.

Mr Biden will also launch a “100 day masking challenge” that will include a mandate that masks be worn on federal property and also when travelling from one state to another.

The president-elect rolled out more senior appointments, naming Wendy Sherman to serve as deputy secretary of state, and Victoria Nuland to be under-secretary of state for political affairs. He has also named many women to senior jobs at the National Security Council, including Laura Rosenberger who will serve in the critical role of senior director for China.

Mr Biden will travel from his Delaware home to Washington on Tuesday, and will spend the night before inauguration at Blair House, the state guest house across from the White House.

In recent days, Trump administration officials have been seen leaving the White House with possessions as they vacate their offices. Peter Navarro, the China trade hawk, was seen carrying a huge photograph of a meeting with President Xi Jinping while the wife of Mark Meadows, White House chief of staff, was photographed carrying a stuffed bird out of the grounds.

As the capital prepared for the inauguration, Republicans who supported the effort by Mr Trump to overturn the result of the election or were accused of inciting the recent violence, continued to lose financial support.

Loews Hotels cancelled a fundraiser that Josh Hawley, the Missouri Republican senator who was one of the strongest supporters for the baseless claim about voter fraud, was planning for Orlando for February. “We are horrified and opposed to the events at the Capitol and all who supported and incited the actions,” Loews tweeted.

Mr Hawley is one of several Republicans who are widely believed to want to run for president in 2024.