Donald Trump is facing growing isolation and outrage over the mob attack on the US Capitol, as Mick Mulvaney and other members of his administration resigned in protest over the president’s conduct.

Mr Mulvaney, Mr Trump’s former acting chief of staff and a loyal supporter of the president, announced his decision to resign as Mr Trump’s special envoy to Northern Ireland, following a turbulent day during which Congress finally certified Joe Biden’s electoral victory after being disrupted by pro-Trump rioters.

Mr Mulvaney told CNBC: “I called Mike Pompeo [US secretary of state] last night to let him know I was resigning from that. I can’t do it. I can’t stay.”

He said others were also considering resigning. “Those who choose to stay, and I have talked with some of them, are choosing to stay because they’re worried the president might put someone worse in,” he added.

Mr Mulvaney is the highest-profile of a string of resignations among Trump administration officials over the past 24 hours. Several aides have departed, including Stephanie Grisham, chief of staff to first lady Melania Trump, and Sarah Matthews, White House deputy press secretary, who said she was “deeply disturbed” by the events.

John Costello, deputy assistant secretary of commerce for intelligence and security, also tendered his resignation on Thursday, citing the “unprecedented attack on the very core of our democracy — incited by a sitting president”.

Several others have reportedly resigned or are considering doing so, including Matt Pottinger, the deputy national security adviser.

The White House did not respond to a request to comment.

Other members of the president’s cabinet insisted they would stick it out despite the turbulence. Chad Wolf, acting secretary of homeland security, said in a statement on Thursday that while the events at the Capitol were “tragic and sickening”, he would remain in his position “to ensure the Department’s focus remains on the serious threats facing our country and an orderly transition to President-elect [Joe] Biden’s DHS team”.

Mr Trump also faced a chorus of criticism from former officials, including William Barr, the ex-attorney-general who was once seen as among the president’s most loyal advisers.

In a statement to Associated Press, Mr Barr, who resigned last month, said Mr Trump’s conduct as demonstrators stormed the Capitol was a “betrayal of his office and supporters”, adding that “orchestrating a mob to pressure Congress is inexcusable”. 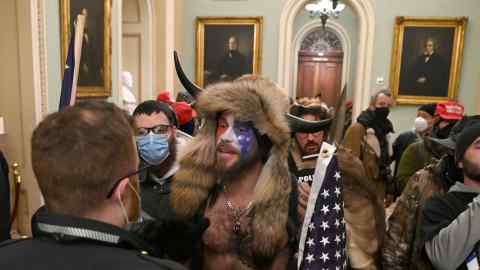 The statements and resignations speak to the unhappiness among even Mr Trump’s closest aides at the way the president handled Wednesday’s events. The outgoing president addressed his supporters in Washington on Wednesday morning, reiterating his false claim that the election was rigged and telling them: “We will never give up. We will never concede.”

Hours later, several hundred rioters attacked and occupied the Capitol building which left four people dead and several others injured. Members of Congress were forced to suspend a joint session to certify the results of the election, but later resumed and finally rubber-stamped Mr Biden’s victory early on Thursday morning.

Mr Trump responded by promising an “orderly transition” to the incoming Biden administration. Though in a statement posted on the White House Twitter account, he added: “I totally disagree with the outcome of the election, and the facts bear me out.”

Despite Mr Trump’s promise to leave office in two weeks’ time, some in Washington are talking about ways to remove him before that.

Under section four of that part of the constitution, the president can be removed from office at the request of the vice-president, along with a majority of the cabinet or “principal officers” of Congress. Nobody has attempted to invoke such a power however since it was first granted in the wake of the assassination of John F Kennedy.

How does the 25th amendment work?

Even though there are only two weeks left of Donald Trump’s presidency, some in Washington are talking about invoking the 25th amendment to the US constitution to remove him from office immediately.

The constitutional amendment was proposed in the wake of the 1963 assassination of John F Kennedy, and was intended to provide a blueprint for what to do if a president was incapacitated.

Under this law, a president can be relieved of his power if he is unable to discharge his duties, or if he is deemed as being unable to do so by others in government.

It is not easy to invoke the 25th amendment without the president’s assent. The vice-president has to sign a letter testifying that the president cannot fulfil his duties, alongside a majority of either the cabinet or principal officers of another body, “such as Congress”.

If enough support is secured, the vice-president automatically takes on the role of acting president. If the president contests the decision, Congress would vote on whether that person is able to continue functioning in the role. A two-thirds majority in both chambers of Congress is required to override the president’s objections.

Parts of the 25th amendment have been used before. Richard Nixon used the rule to appoint Gerald Ford as his vice-president after Spiro Agnew resigned. Ford then used it to take over as president following Nixon’s own resignation.

The amendment has never been used by others in government to remove a president.