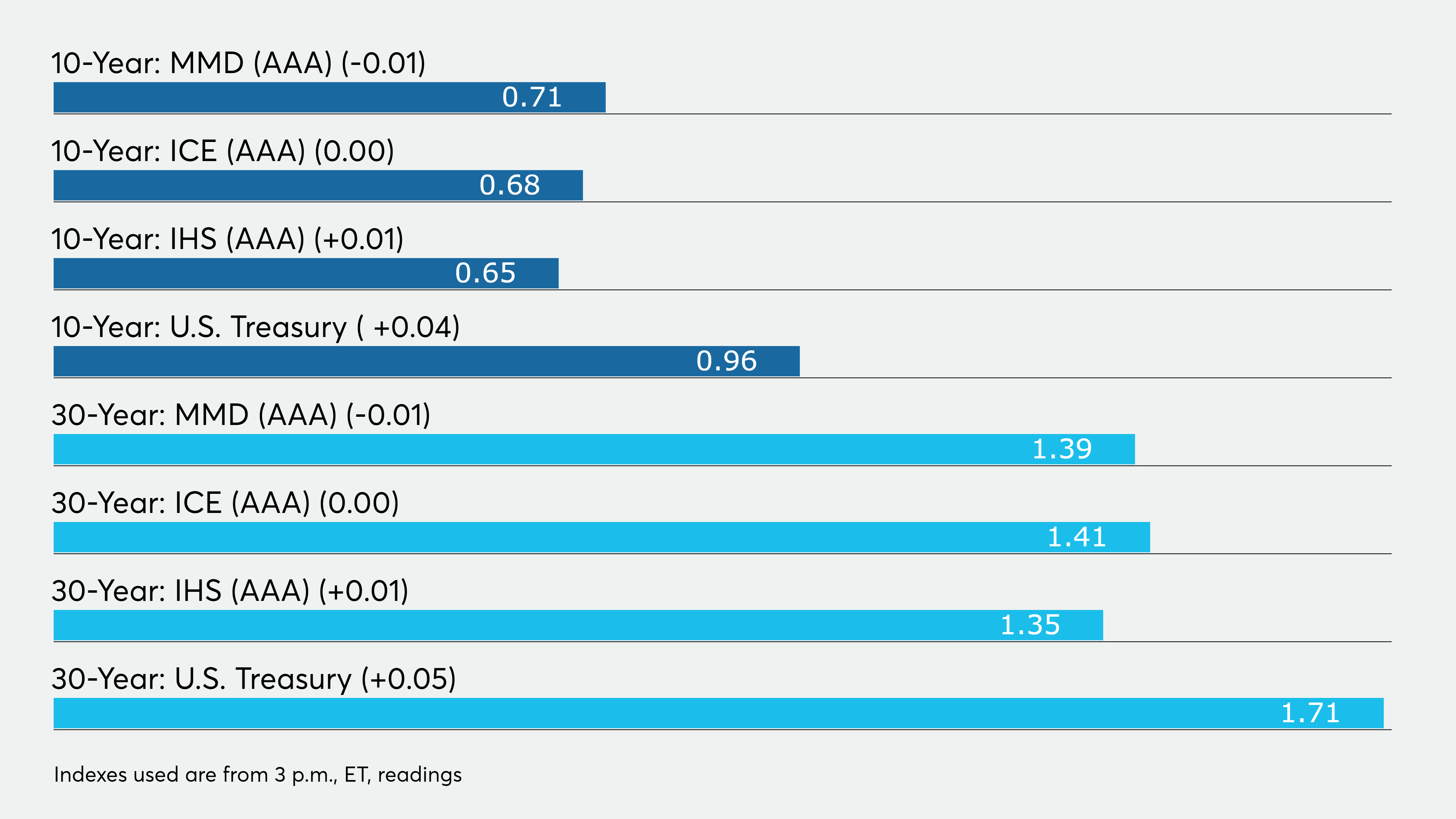 The secondary market saw an uptick in trading of high-grades on Tuesday but those bonds came at a cost while yields on AAA scales were firmer by a basis point seven years and out as the supply/demand imbalance remains.

Without the benefit of a larger new-issue calendar, secondary trading is likely to continue the theme of the final two months of 2020 — more bidders than bonds, traders and analysts say.

“Trading picked up where it left off as picked-over inventories are showing tighter spreads: 1- and 2-year bonds have moved to nominal pickups against the 7-day SIFMA rate of 0.09%, intermediate high-grades with longer optionality continue to draw bidding closer to call dates than maturities and longer-dated 3s are compressing to tighter spreads into 5s from late-November levels,” said Kim Olsan, senior vice president at FHN Financial.

In fact, Olsan noted, it isn’t only January’s heavier reinvestment cycle that could affect the direction of tax-exempt spreads throughout 2021.

Olsan, citing CreditSights data, said throughout 2021 it is expected that nearly $300 billion will roll off between maturities and announced calls, which adding in more potential callable bonds, it exceeds tax-exempt volume projected for all of 2021.

Total redemptions will grow as issuers refinance older bonds that have not already been pre-refunded or called, CreditSights noted in a recent report.

“If the recent surge in taxable supply persists into the new year, redemptions of tax-exempt munis could exceed supply,” the report said.

“If issuers redeem just half of the callable bonds with 4% or higher coupon rates and 1/4 of the bonds with 3%- handle coupons, that would amount to $73 billion; adding in the $96 billion already scheduled to be redeemed in the year would bring total bond calls to $169 billion and total redemptions for the year to $374 billion, which would be just above our 2020 estimated total of $372 billion,” according to CreditSights.

“Due to economic conditions and the revenue pressures on state and local governments, we expect that issuers will be aggressive in trying to find ways to save money on debt service, so the percentages of bonds that get refinanced could be higher,” the report said.

Of course due to the inability of issuers to advance refund exempts, the taxable total will continue in earnest in 2021.

The supply/demand imbalance continues in 2021 and municipal to U.S. Treasuries remain quite rich.

“We expect technicals will remain in charge here until we get more supply to test some of the ratios,” a New York trader said. “It’s going to be a situation where we will continue to outperform unless we get some supply.”

“We’re definitely on the richer side, but again there’s nothing to change that because there’s so much money looking to be put to work, so investors just have to overlook the fundamentals and hold their nose and buy,” the trader said.

Primary market
Most of this week’s large negotiated deals will be coming to market on Thursday.

The Institute for Supply Management’s manufacturing index exceeded expectations, growing to 60.7 in December from 57.5 in November, while economists polled by IFR Markets projected a decline to 56.5.

The number is not only better than pre-pandemic levels, but its highest reading since August 2018.

Calling the read “a surprise,” Ed Moya, senior market analyst at OANDA, said, “If the U.S. economic recovery follows the Chinese playbook, manufacturing could really accelerate higher once the U.S. gets a better handle on COVID.”

The numbers suggest “demand is firming as the economy continues to strengthen,” according to Scott Anderson, chief economist at Bank of the West. “But signs of life in manufacturing demand is coming with a healthy dose of price pressure. The prices paid sub-index soared 12.2 points to 77.6, the highest reading since May 2018. The increase in production costs may weigh on the manufacturing sector’s profit margins near-term. If the cost pressures are sustained and passed on to consumers, it could lead to higher consumer inflation down the road.”

And the Morgan Stanley economics team said it has “increased confidence” that inflation, measured by core personal consumption expenditures, will surpass 2% “this cycle,” as it has predicted since May. This is an outlier from most projections

“We believe our assessment of private sector risk appetite is the key difference,” Morgan Stanley said in a report.

“With limited scarring thanks to a sharper but shorter cycle and with income losses underwritten by policy support, we have seen limited signs of stress in household and corporate balance sheets. Demand should therefore rebound sharply once restrictions on mobility and spending opportunities are lifted. The stronger growth outcome we expect also means that unemployment rates will decline faster than the consensus expects. Moreover, since job losses are concentrated in the lower income segments, the headline unemployment rate overstates the economic loss. Finally, accelerated restructuring would mean higher NAIRU in the near term.”

Still to come this week
The only other potential $100-million-plus competitive deal this week is a $145 million Florida Board of Education PECO deal on the day to day calendar.

“There is still a bunch of money around and really no primary market to speak,” a New York trader said, pointing to the arrival of Thursday’s $350 million New Jersey Economic Development Authority offering for school construction as a crowd pleaser. Loop Capital Markets is expected to price the New Jersey EDA’s (Baa1/BBB/BBB+/NR) Series 2021 QQQ school facilities construction social bonds.

As an appropriated credit that is similar in nature to the state’s transportation deal that came in November, the trader said the EDA deal will get some good attention as the first large deal of the week, even if they get a new-issue concession.

The state transportation bonds have tightened up since November and he expects the EDA bonds to benefit from that tightness as a credit rated Baa1 by Moody’s Investors Service and BBB by Standard & Poor’s.

“As long as investors are comfortable buying New Jersey, I would expect it will be highly sought after, especially since it’s not that large of a deal,” the trader said.

RBC Capital Markets is set to price the City and County of Denver School District No. 1, Colo.’s (Aa1/AA+/AA+/) $450 million of general obligation refunding bonds on Thursday. The deal is backed by the Colorado State Intercept Program.

Wells Fargo Securities is ready to price the California Infrastructure and Economic Development Bank’s $271.5 million of Series 2021A, B and C refunding revenue bonds for the Los Angeles County Museum of Art project.

Christine Albano contributed to this report.