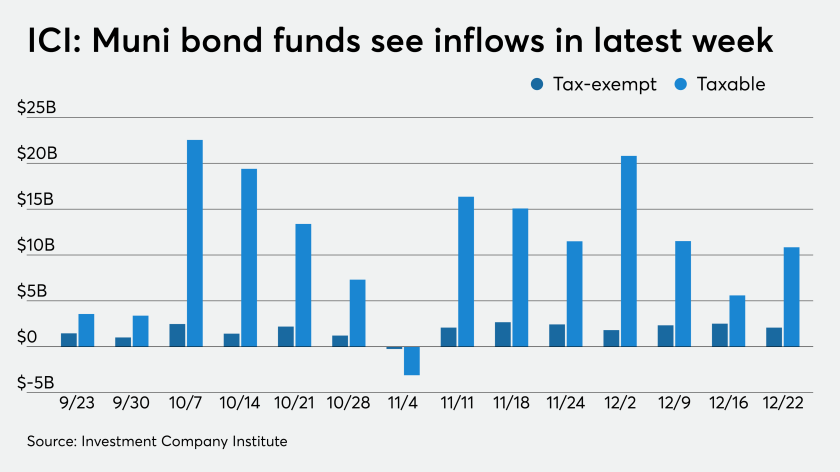 Municipal bonds were stable on Wednesday as the market remained mostly unchanged on the last full trading day of 2020. Thursday will see an early close with a full close on Friday. Trading will resume on Monday, Jan. 4, 2021.

Residual position-squaring is about all that is happening this week — and much of last — as yields have held steady since Dec. 17 and will close out the year the same.

“The risk-on, risk-off theme won’t be much of an influence for tax-exempts for at least a week or so until the calendar builds,” said Kim Olsan, senior vice president at FHN Financial.

Broad themes such as continued solid inflows — ICI reports another $2 billion-plus — favorable tax-exempt yields in longer bonds and a smaller share of tax-exempt volume, which have been in place since November’s rally started can all be expected to carry over into 2021, she said.

In the previous week, muni funds saw an inflow of $2.517 billion, ICI said.

Taxable bond funds saw combined inflows of $10.843 billion in the latest reporting week after a revised inflow of $5.598 billion in the prior week, originally reported as $5.519 billion.

ICI said the total combined estimated inflows from all long-term mutual funds and ETFs were $8.568 billion after a revised inflow of $15.504 billion in the previous week, originally reported as a $15.102 billion inflow.

There are no other deals left on the calendar for this year.

Treasuries were stronger as stock prices traded up.