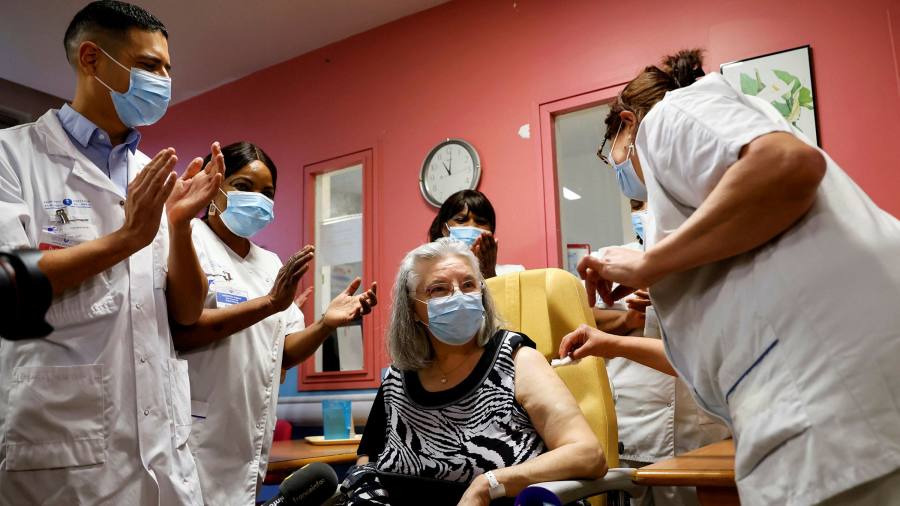 A 78-year-old former French cleaning lady, a 96-year-old Spaniard in a care home and a 29-year-old Italian nurse became some of the first people in the EU to receive the BioNTech/Pfizer vaccine against coronavirus, as a new, more infectious strain of the virus spreads across the bloc.

In co-ordinated actions on Sunday, countries including France, Germany, Italy and Spain began vaccinating older, at-risk people and frontline medical and care staff, while warning that in the immediate future restrictions were likely to be tightened rather than relaxed.

France launched its vaccination programme on Sunday morning with elderly patients and medical staff in Sevran near Paris — the first to receive the injection was Mauricette, a 78-year-old retired cleaning lady — to be followed by a geriatric ward in Dijon in Burgundy in the afternoon.

Others vaccinated on Sunday included Araceli Rosario Hidalgo, a 96-year-old in a care home in Guadalajara, who became the first to receive the injection in Spain, and Claudia Alivernini, a Rome-based nurse, the first person in Italy to receive the jab.

In Germany, Edith Kwoizalla, a 101-year old woman, had already been vaccinated on Saturday in the state of Saxony-Anhalt — leading the national health ministry to complain that the regional authorities’ decision to start the jabs a day early undermined the co-ordinated EU rollout.

The vaccination campaign started after the EU’s medicine regulator approved the BioNTech/Pfizer vaccine, the first Covid-19 shot to get the green light, on Monday. UK and the US regulators have also authorised the vaccine and begun its rollout this month.

The EU has ordered 300m doses of the BioNTech/Pfizer vaccine — enough for 150m people, as two doses are required for each person, as well as hundreds of millions of doses of vaccines yet to be approved, including those made by AstraZeneca, Sanofi-GSK, Johnson & Johnson, CureVac, and Moderna.

“If you had told me six months ago that it would happen this fast, I wouldn’t have believed it,” Olivier Véran, French health minister, was quoted as saying in Le Journal du Dimanche. But he also warned the French government could not rule out a third national lockdown to slow down infections and called on people not to celebrate New Year’s Eve. German authorities issued similar warnings, calling on citizens to refrain from the tradition of setting off fireworks to avoid large gatherings in the street and jamming up hospitals with injuries.

France, like Germany and Italy, has already detected a case of the new, highly transmissible variant of coronavirus that has become widespread in parts of southern England and has led several countries to restrict or ban travel with the UK. Spain on Saturday said it had identified four cases, all of them people who had arrived from Britain.

There is no definitive evidence yet that the new vaccines offer protection against the new variant. But experts maintain it is highly likely to do so, since the part of the virus that the jabs target, the so-called spike protein, is likely to not have changed.

However, scientists have also cautioned that vaccination campaigns and lockdowns are likely to inflict “evolutionary pressure” on the virus in the long run, meaning tweaks to highly efficacious vaccines will still be needed. Health authorities have already reckoned that vaccination campaigns are likely to be necessary yearly to offer lasting protection against future outbreaks.

There also remain questions about how many citizens will ultimately accept vaccination. France is among the most sceptical countries in the world about vaccines. In a 2018 study, one in three disagreed that vaccines were safe, the highest proportion of any country. In Germany, according to a YouGov poll, about two-thirds of people are willing to take the vaccine, while about 19 per cent are against a vaccination, and another 16 per cent are undecided. Of those who said they were willing to be vaccinated, 33 per cent said they would take the vaccine after waiting to see the impact on those first vaccinated.

But Jens Spahn, health minister, trumpeted the vaccine as a national achievement. “The vaccine was developed by BioNTech, a German company,” he said. “This vaccine, made in Germany, means hope for us and for the world.”