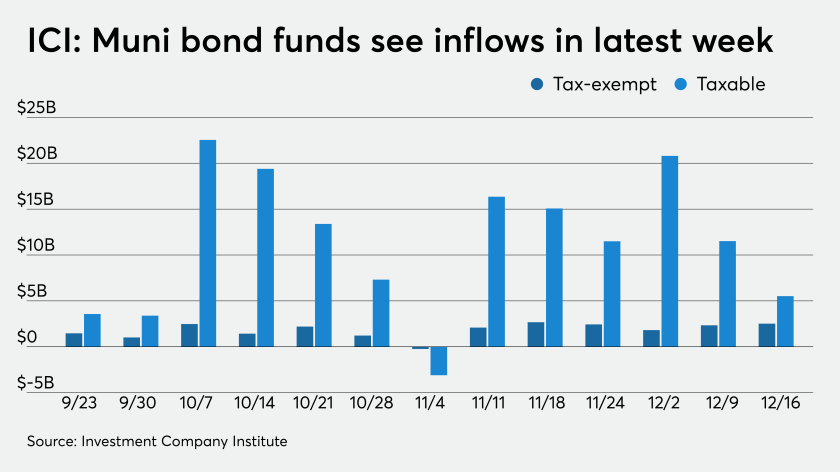 Municipal bonds were unchanged Wednesday as the market prepares to go into holiday hibernation ahead of the Christmas and New Year’s holidays. Yields on top-rated muni bonds were flat, remaining steady across the AAA scale. Treasury bonds were weaker as equities traded up.

In the primary, there are no negotiated or competitive deals over $50 million slated for this week or next.

“Considering the decline in new issuance it isn’t that surprising that secondary flows are showing a slowdown as well,” said Kim Olsan, senior vice president at FHN Financial. “Static yields and stubbornly-low ratios mean that inquiry has time to bide into the end of the year and look ahead to early 2021 supply.”

In the previous week, muni funds saw an inflow of $2.338 billion, ICI said.

ICI said the total combined estimated inflows from all long-term mutual funds and ETFs were $15.102 billion after an inflow of $12.047 billion in the previous week.

Fitch: Ill. has budget troubles, but can fix them
Illinois has deep budget challenges, but also has the fiscal tools to address them if it has the political will to do so, according to Fitch Ratings.

Illinois’ $2 billion borrowing from the Federal Reserve’s Municipal Liquidity Facility illustrates this dilemma, as it gives the state only a short-term solution for a $3.9 billion fiscal 2021 gap. The MLF borrowing follows the state’s $1.2 billion MLF borrowing in June.

Gov. J.B. Pritzker has proposed $711 million in budget reductions and the state legislature may take further action in the 2021 session, such as enacting additional spending cuts and tax increases.

Before the most recent MLF loan, Illinois faced a gap of almost $4 billion in its $43 billion budget. Pandemic-driven shortfalls accounted for about half of the gap, Fitch said, while the remainder reflected the underlying structural issues, which are a key factor in the state’s relatively weak credit profile.

While the governor has ruled out taxing retirement income, other options include raising personal and corporate income taxes and a sales tax expansion to more services. Fitch said it expects the legislature will consider the spending cuts and tax hikes in early 2021.