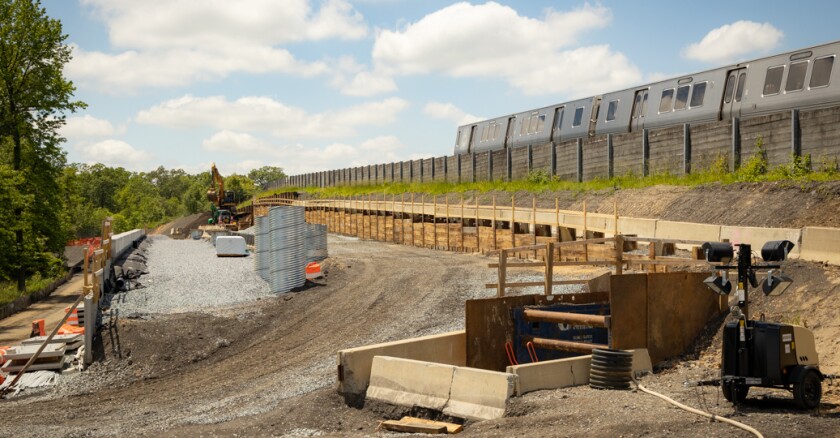 Fitch Ratings upgraded Purple Line Transit Partners’ senior-lien revenue bonds issued through the Maryland Economic Development Corporation (MEDC) by one notch to BB-minus from B with a positive outlook Tuesday after the state’s Board of Public Works approved a $250 million settlement enabling the P3 to move toward completion.

The agreement includes provisions requiring the Maryland Department of Transportation to cover full payment of outstanding debt if the project is terminated compared to the 80 cents on the dollar Purple Line bondholders had been expecting.

“Previously, if it wound up being deemed a termination for a concessionary default, then the lenders would not have gotten their full money back,” said Fitch analyst Jeffrey Lack. “Now if there is any termination, there is clarity in the contracts that they be made whole.”

The MDOT agreed last month to pay $250 million to Purple Line project sponsors to resolve a lengthy legal dispute over $800 million of cost overruns that caused PLTP to halt construction of the 16-mile, 21-station light rail line in October. The project is 40% completed and an estimated two and a half years behind schedule from its original 2022 expected completion date.

Fitch had downgraded PLTP’s bonds to B from BB in August and placed them on negative watch due to heightened risk of work stoppages and potential court action.

Lack said the project would also get a boost if private partners Meridiam and Star America are able to find a new design-build contractor in coordination with MDOT as part of settlement. The parties have nine months to select the contractor. Upcoming March and September 2021 debt service payments will be paid from existing equity.

S&P Global Ratings rates PLTP’s senior-lien revenue bonds five notches higher than Fitch at BBB-minus. It placed the bonds on CreditWatch negative this past March due to risks of construction delays resulting from the COVID-19 pandemic.

S&P did not immediately respond for comment on how the finalized settlement will impact the rating.

Lack said there could be additional senior bonds issued by PLTP through the MEDC in order to finance the settlement agreement and rising construction costs.

“If the company had to issue additional bonds then the state would be the ones likely paying a higher cost,” he said. “The creditworthiness of the state is there to support that.”

Under the settlement agreement, MDOT will pay $100 million by Dec. 31 and the remaining $150 million from a new PLTP financing that will occur after the selection of a new design-build contractor. As part of the settlement, Meridiam and Star America agreed to spend up to an additional $50 million to keep construction moving until a new contractor is on board.

“Once we have better established the updated project costs, we will contemplate the potential need for additional financing as contemplated in the settlement agreement,” Undeland said.

The MDOT press office did not immediately respond for comment.