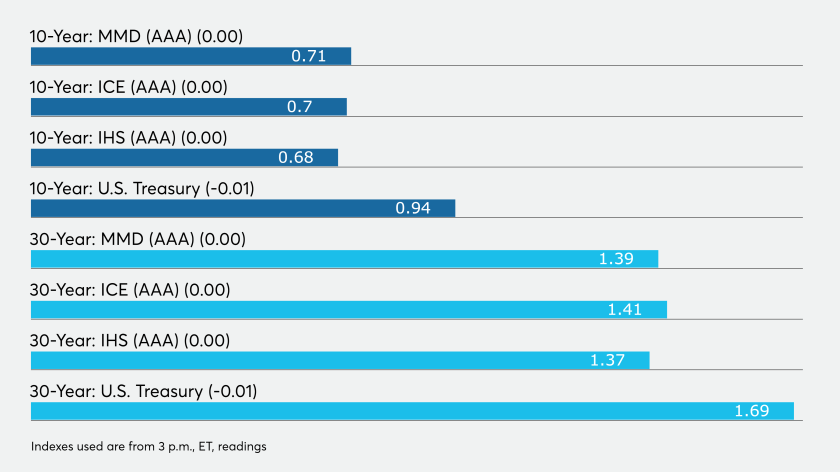 Municipal bonds were unchanged Monday as the new-issue calendar slipped into neutral for the next two holiday-shortened trading weeks.

Yields on top-rated muni bonds were steady, remaining unchanged across the AAA scale. Treasury yields moved a bit lower as stocks traded little changed after Congress neared agreement on a $900 billion stimulus package and a new strain of the coronavirus virus hammered the United Kingdom.

“While the richening of ratios from earlier this year was partly due to tax-free rates rallying, the moves over the past few weeks have been due to U.S. Treasury yields pushing higher, while munis have been largely unchanged,” Kazatsky said.

“Despite near-term credit concerns and the expiration of Federal Reserve facilities that have served as a backstop for distressed issuers, the technical tailwinds for tax-exempt munis are continuing into year-end,” he said.

“How have munis performed versus Treasuries during the past three months?” asked Daniel Berger, senior market strategist at Refinitiv Municipal Market Data. “The 10-year muni/Treasury ratio has not yet hit its three-month low of 74.0% reached on Dec. 4 and the 30-year muni/Treasury ratio does not have much to decline to reach its three-month low of 81.8% also reached on Dec. 4.”

“With no supply to speak of and a strong Jan. 1 reinvestment demand expected, there is little to restrain muni further outperformance,” Berger said.

IHS Ipreo estimates this week’s volume at $56.99 million in a calendar composed of $43.3 million of negotiated deals and $13.7 million of competitive sales.

While this wind-down in supply is contributing to current tight conditions, the trend really began several months ago following the market dislocation, according to Kim Olsan, senior vice president at FHN Financial.

“Sectors that were shunned as lockdowns began have seen an ongoing compression into AAAs. Airport, transportation and healthcare bonds are showing renewed interest based on recent trading,” she said.

She noted that single-A credits over the past 30 days have totaled 14% of all secondary volume, but reflect spreads being constrained by low yields.

“The entire curve is undergoing a consolidation as sub-1% rates hold firmly inside 10-years and generic 5s further out the curve fail to hit even 1.50% rates,” Olsan said.

Refinitiv Lipper reports $915M inflow
Weekly reporting tax-exempt mutual funds saw $915.233 million of inflows in the week ended Dec. 16, Refinitiv Lipper reported last week. It followed an inflow of $992.127 million in the previous week. The four-week moving average remained positive at $735.031 million, after being in the green at $838.233 billion in the previous week.

Secondary market
The most active bond types traded last week were revenue bonds, followed by GOs and taxables, according to IHS Markit.

Primary market
Last week, the largest use of proceeds in the muni sector was education followed by utilities and other revenues, according to IHS Markit.

Refinitiv MMD estimates the $56.99 million supply total consists of $48.5 million of tax-exempts and $8.5 billion of taxables.

The year-to-date weekly average volume has been $6.2 billion.

There are no negotiated or competitive deals slated for this week or next that are over $50 million.