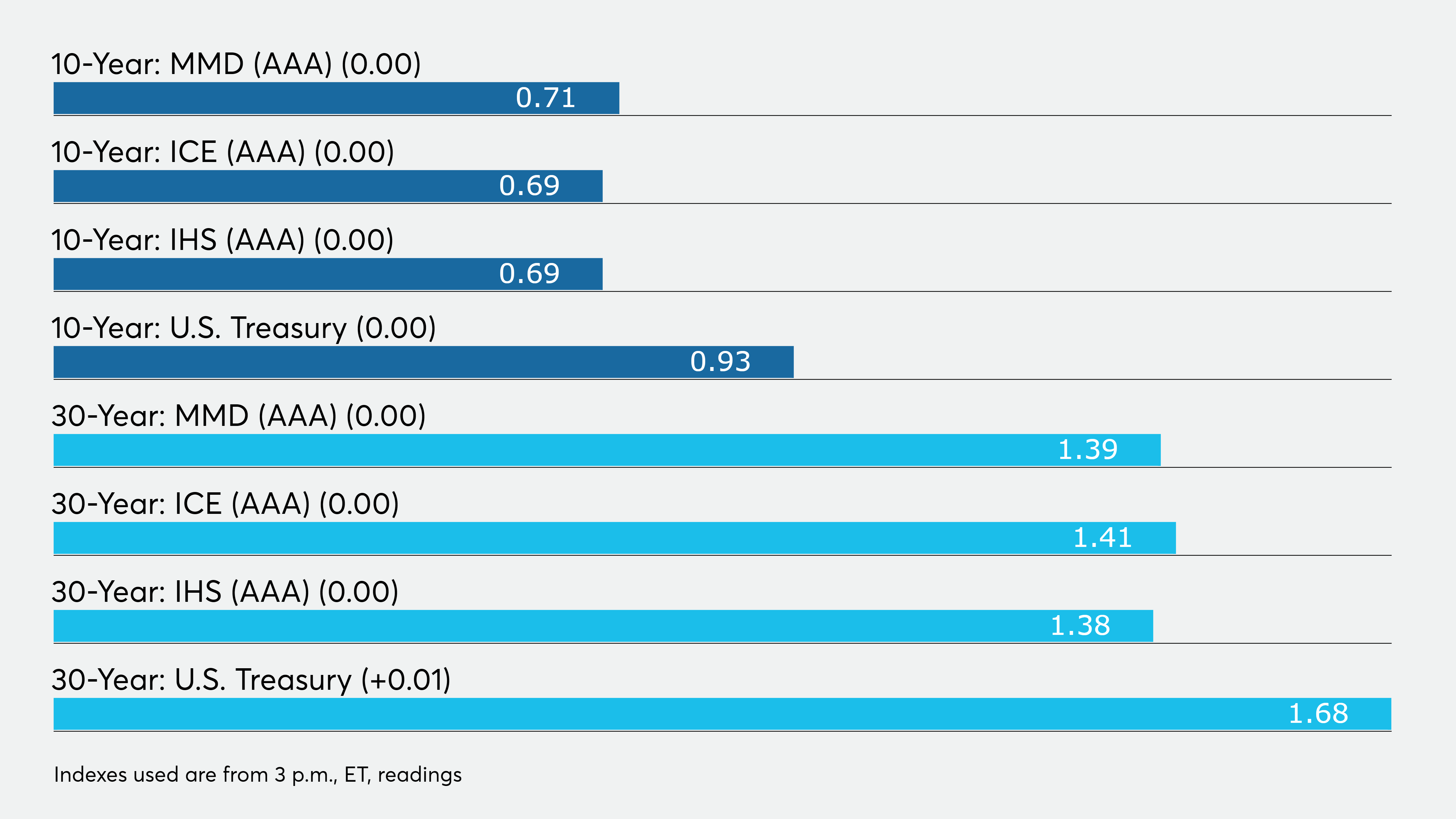 “Based on their continuing evaluation of debt management alternatives for their U.S. toll concession assets, the shareholders have decided to defer the refinancing of the LBJ Infrastructure Group LLC’s TIFIA loan and the company will not sell the proposed Series 2020C bonds as planned. The company may undertake a similar or other refinancing transaction at a future date,” a notice sent by the syndicate, led by BofA Securities said.

The dearth of tax-exempt new issuance is joined by its taxable counterparts. Taxable inquiry is finding few larger deals to satisfy cash needs.

Recently downgraded New York City taxable general obligation bonds in 2037 were priced to yield 2.473%, plus 33 basis points to the AAA taxable curve or plus 140 basis points to exempts in the same maturity. Those spreads are wider than an August deal but to be expected given the downgrade.

Meanwhile, the entire municipal exempt yield curve is seeing consolidation with a 125 basis point spread between one and 30 years, and sub-1% yields are holding firm inside of 15 years.

With little in the way of new issuance for the balance of the year and redemptions totaling $20-plus billion, the municipal market should coast through into 2021 while investors will need to manage without new paper.

“Year-end buying is a factor and it’s going to basically confirm that we are going to have market stability in the muni sector — and I suspect we will be ending the year on a firm tone,” Howard Mackey, managing director at NW Financial in Hoboken, N.J., said.

“There’s been a little softening in the market, but munis are still pretty solid and there’s been good inflows into muni bond funds,” Mackey said.

He pointed to Tuesday’s pricing of $2.1 billion of Empire State Development Corp. personal income tax bonds, $1.6 billion of which were tax-exempt, as well as Connecticut’s $800 million of general obligation bonds as two well sought after deals due to their lower-coupon structure and quality.

“I think there’s been some pushback from a dollar price standpoint,” Mackey said. “Even though in the past year or so 4% and 5% coupons have really done better, right now we are basically seeing some retail demand for lower coupons and a lower dollar price,” under 10 years, he said, adding, the Connecticut deal exemplifies the recent trend.

“If you get into 2% and 3% coupons on high-grades there’s a 10 basis point spread-give in terms of yield and that is attractive,” since absolute yields are so low, he said.

For instance, on the Connecticut deal, which is rated A1 by Moody’s Investors Service, A-plus by S&P Global Ratings, and AA-minus by Fitch Ratings, the 2022 maturity with a 3% coupon yielded 0.23%, compared to the 0.14% yield on the generic benchmark GO scale tracked by Refinitiv Municipal Market Data when it was priced.

Underwriters and issues are crafting the lower coupon structures to cater to retail demand from individuals, separately managed accounts, as well as wealth management accounts that are trying to achieve laddered portfolios, according to Mackey.

“Because of the scarcity, they will take the lower coupons,” Mackey said of the retail crowd. “Add the fact that they might get a yield benefit for doing so and that has heightened demand.”

Mackey said the demand for new issues with similar structures and quality should be brisk through year end, including the New York PIT bond deal as one of the deals seeing strong demand. The deal contained a 2040 maturity with a 3% coupon that yielded 2% — 83 basis points higher in yield than the comparable 2020 maturity on the Refinitiv MMD triple-A scale when the bonds were priced.

“There’s some year-end buying, New York is a specialty state, and the PIT bonds are a high-grade credit, so they should do well,” Mackey said.