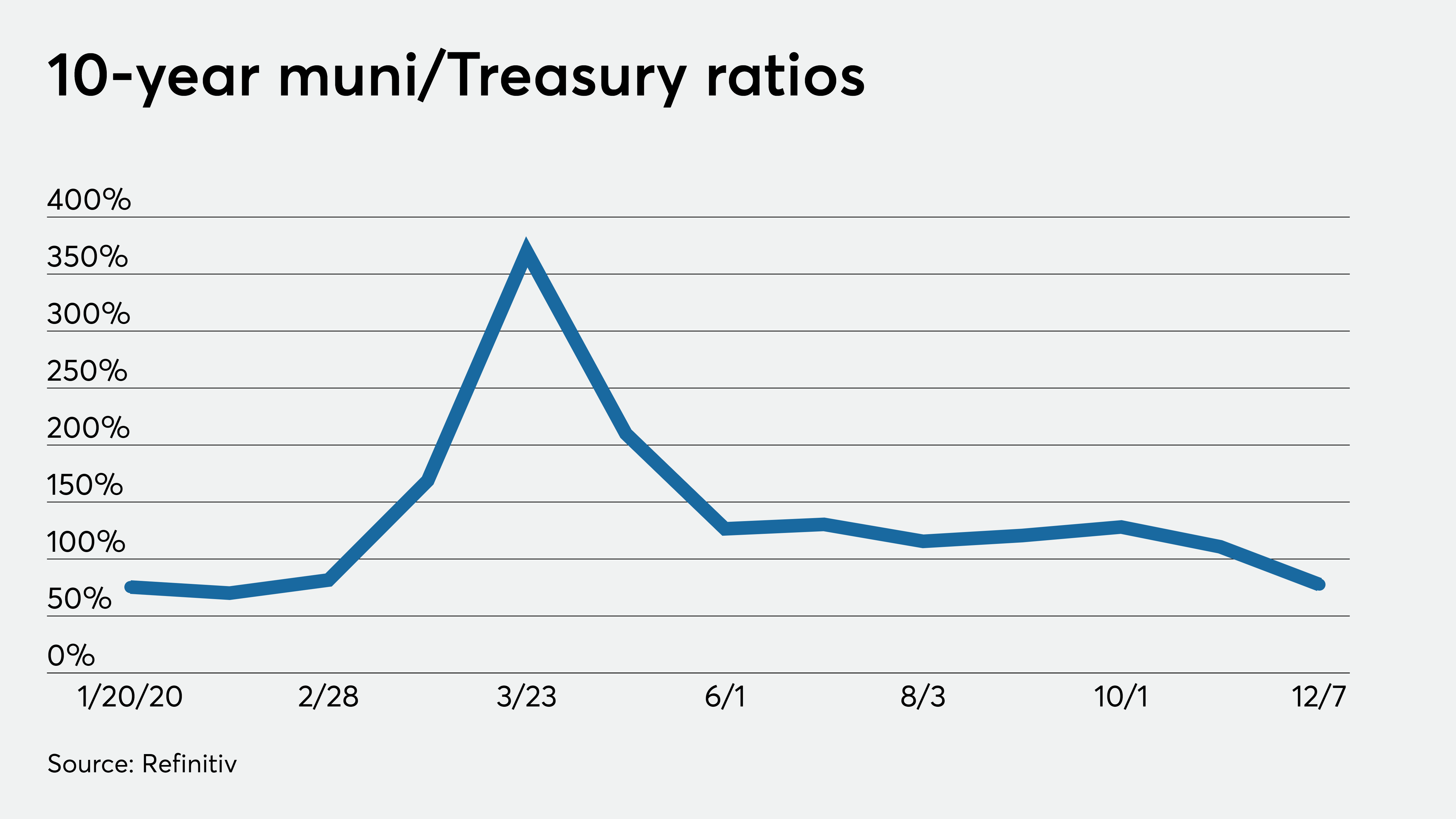 Municipal bonds were steady Monday as strong technicals and the dearth of new-issue supply relative to redemptions continued to flatten the yield curve and keep muni/U.S. Treasury ratios low.

Treasuries pared back Friday’s losses to see the 10-year hover around 0.93% Monday but the divergence of municipal rates from UST continues while investors await a new-issue calendar. The 10-year muni was around 0.72% on AAA benchmarks.

The primary’s diversity of credits and size relative to November has grown, but it is just not enough to push yields higher as redemptions flood the market.

“Even as COVID-19 risks have reignited in almost all sectors, technicals related to fund inflows have been the driving force for the market and have served to keep yields in check, despite the market historically hitching itself directionally to Treasuries,” said Eric Kazatsky, senior U.S. Municipals strategist at Bloomberg Intelligence.

Treasury yields were up last week, following an upward yield bias over the last month, and municipals have decoupled from historical relationships with Treasuries, and even movements in corporate bonds and equities.

“The 10-year AAA spot has outperformed the UST by 26 basis points since early November, causing relative value to fall to 73%,” said Kim Olsan, senior vice president at FHN Financial. “Its lowest value in the last 10 years was hit this past January when it reached 70%. While all major spots have seen ratios fall, some are not yet at their lowest points.”

“Based on upcoming supply that includes a broader mix of smaller-scale deals, a modest correction may build over the week,” Olsan said.

A wider view into early 2021 offers minimal relief with money coming out of the market via redemptions exceeding what is projected from incoming supply.

“Given those considerations, structures of all varieties are playing larger roles in how money is being allocated, with valuable concessions sought after on a flattening yield curve,” Olsan said.

Over the last 3 months, the 1-30 year slope has averaged 145 basis points, but is currently reading 128 basis points.

The taxable theme that has dominated 2020 has opened up the investor base for the municipal market.

“The stubbornly low ratios, and high valuations, of tax-exempt bonds in the shorter portion of the muni curve could result in some investors eyeing alternatives within the broader muni credit universe,” Kazatsky said. “With a similar low correlation to corporate credits and equity markets as their tax-exempt cousins, taxable municipal bonds continue to be a cheap alternative for investors not locked into exempt-only mandates.”

Taxables are poised to return near or above 10% for the year, more than any other sector of the municipal market.

Primary market
The University of Connecticut priced bonds for retail for the second day with one to two basis point bumps in scales.

Connecticut has plans to sell $800 million of general obligation bonds Tuesday. The unlimited tax GOs are serials from 2022-2041. Jefferies is bookrunner on the deal. 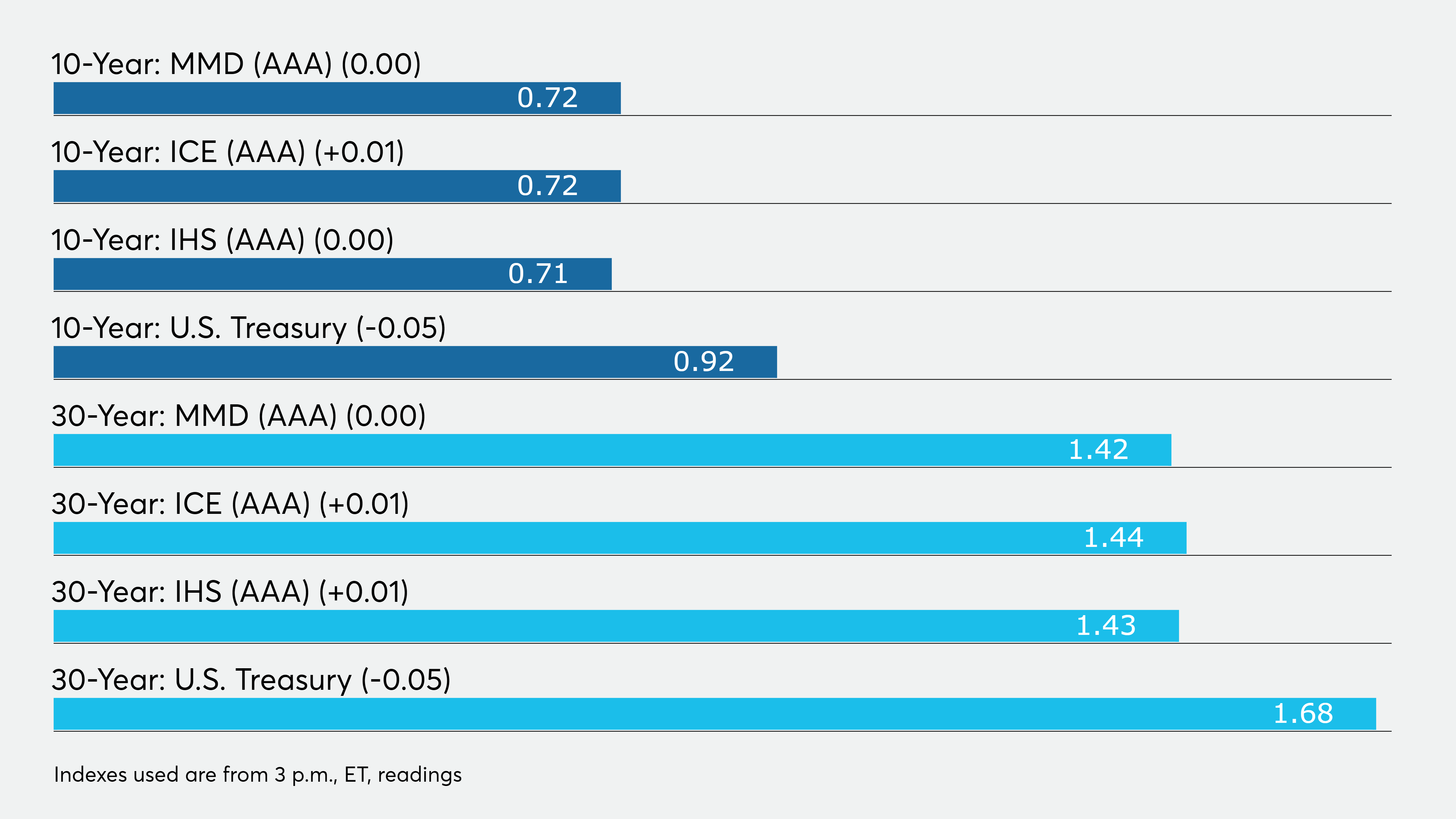