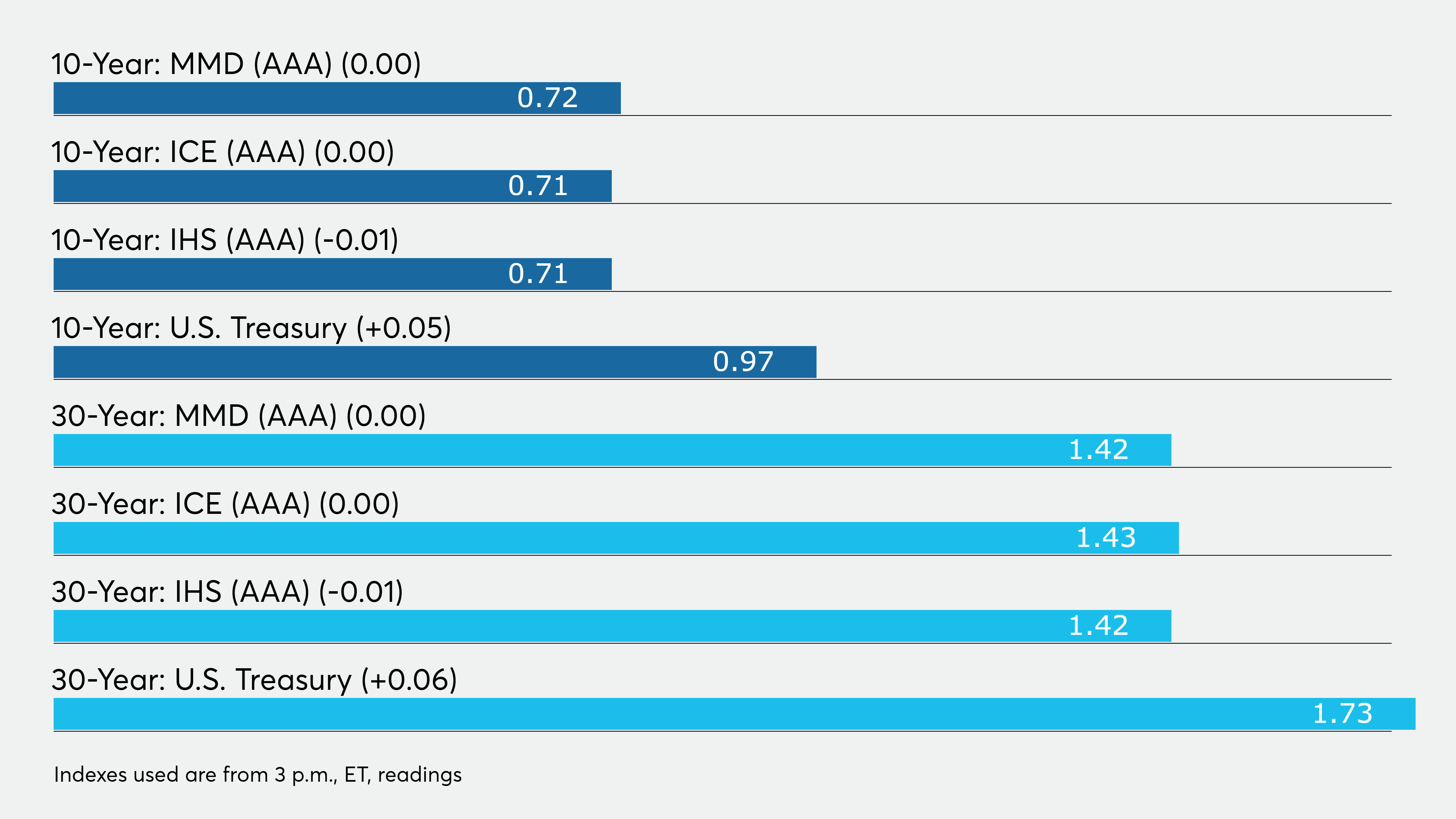 Municipals ended the week little changed ahead of an at least $9 billion new-issue calendar led by a Puerto Rico Aqueduct and Sewer Authority $1.4 billion refunding deal and a Massachusetts $1.2 billion of taxable general obligation revenue anticipation notes, among an eclectic mix of credits.

Triple-A benchmarks held steady with some curves showing minor softening but not enough to push levels higher and the municipal market continued to ignore rising Treasury rates and a booming equities. The absolute low yield and rich ratio environment continues in the municipal market.

Supply is simply underweight in a market that is clearly in need of new paper. That paltry new issuance going forward competes with at least $20 billion in redemptions in the pipeline. Yields continue to defy a weakening U.S. Treasury market, with ratios now at 74% for the 10-year and 81.8% for the 30-year, according to Refinitiv MMD. The ICE 10-year muni-to-Treasury ratio was calculated at 73% while the 30-year muni-to-Treasury ratio stood at 83%. ICE’s five-year ratio was at 47%.

“It’s unclear how long investors will be able to stomach rates this low, and one has to think that munis will follow Treasuries as they head higher and rates generally rise as well, but so far, munis march on and outperform,” a New York trader said.

The secondary may take more of a backseat next week with the mixture of new issues of various exempt and taxables, short and long names in the lineup.

“Going about pricing a PRASA deal since it has been so long is analogous to pricing the Great Lakes Water after the Detroit filing,” said John Hallacy, founder of John Hallacy Consulting LLC. “The two cases have similarities but are also very different.”

“Other interesting pricings will include Florida Brightline, Miami-Dade subordinate special obligations, NYC multifamily, and the Sports Authority of Nashville and Tarrant County-Hendrik Medical Center,” Hallacy said. “Whether risk levels are embedded in the pricings remains to be seen. It is a bit of a relief to price a credit as strong as LADWP during the week. Good luck to us all.”

The week’s deals, if any indication, show the hunt for yield and ability for the market to accept some concessions.

“The deals went well and munis continue to outperform Treasuries — especially today as they are down to 82%, which is really fast approaching a record spread of munis to Treasuries,” a New York trader said.

Though large deals entered the market this week, including the highly oversubscribed New Jersey Transportation Trust fund deal, “It continues to be all about supply, and lack of it,” he said.

With so much reinvestment money to be spent, the large new deals are getting quickly snapped up, he noted.

“There’s too much money around and not enough deals coming,” he said. “A lot of these calendars are somewhat anemic and half of them are taxable.”

As a result, the scarcity factor is keeping municipals firm.

“I don’t really see that changing the rest of the month. It will start to slow down around the 15th with people closing their books,” he said. “For a lot of firms it’s been a tough year, between the March, April, and May dislocation, there is a lot of money to be made back.”

At the current percentages and tight ranges there are no real trades to put on and dealers want to be cautious at year end.

“People are trying to protect whatever profits they made this year — and they are not putting that in jeopardy,” he said.

Looking ahead to next week, the arrival of the $1.4 billion Puerto Rico Aqueduct & Sewer Authority revenue refunding bonds should fare well, according to the trader. “I don’t know the ramifications in the general market, but any high-yield credit that has come has done well and been oversubscribed,” he said, pointing to New Jersey and many hospital deals that have been priced in the past month.

“Puerto Rico is a little different animal — and at the end of the month and end of the year, they will likely price it to the interest and it will be gone,” he added.

The trader said next week might be one of the last full weeks for investors to participate.

“Then we will start floating into an anemic calendar, with people shutting down the books and going on vacation — it’s been a heck of year for a lot of people and there might even be more holiday vacations than in past years,” he added. “There is still a lot of cross current and a fair amount of angst — but things seem to be settling down.”

New York City plans to sell about $1.5 billion of general obligation taxable bonds on Wednesday, Dec. 16, adding to the large taxable billion-dollar-plus deals that have made up a large part of overall muni paper.

The bonds will be priced by book-running lead manager Jefferies; Loop Capital and Siebert Williams Shank will be the co-senior managers.

Proceeds will be used to advance refund about $1.3 billion of outstanding tax-exempt and taxable bonds for debt service savings in fiscal 2021 and 2022.

Secondary market
High-grade municipals were unchanged, according to final readings on Refinitiv MMD’s AAA benchmark scale. Short yields were flat at 0.14% in 2021 and 0.15% in 2022. The yield on the 10-year was unchanged at 0.72% while the yield on the 30-year was one basis point higher at 1.42%.

Bond Buyer indexes mostly unchanged
The weekly average yield to maturity of the Bond Buyer Municipal Bond Index, which is based on 40 long-term bond prices, dipped one basis point to 3.50% from 3.51% in the previous week.

The Bond Buyer’s 20-bond GO Index of 20-year general obligation yields was unchanged from 2.13% from the prior week.