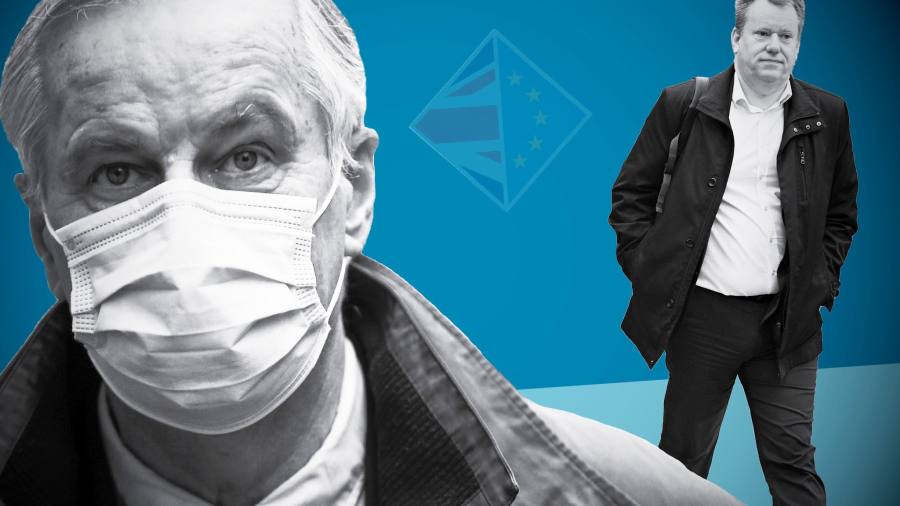 Nine months after talks began, the strain showed as Michel Barnier and David Frost entered the windowless “cave” on Friday in a final attempt to settle the post-Brexit relationship between Britain and the EU.

Negotiations that began in March and were supposed to wrap up by July, then by October, were finally entering what both sides acknowledged was the endgame. “They’ve gone as far as they can go,” said one UK official.

Sustained by takeaway pizzas and sandwiches, Mr Barnier, the EU chief negotiator, and Lord Frost, his British counterpart, have led teams that worked late into the nights in London this week on a future relationship agreement.

But an air of serious uncertainty hung over the process as the negotiations were “paused” to allow Boris Johnson to speak to Ursula von der Leyen, European Commission president, to try to break the deadlock. UK officials had earlier warned the talks were at “a very difficult point”.

Both sides now accept that any deal penned by officials in the dismal subterranean Department for Business conference centre — a stone’s throw from the UK parliament — will have to be referred to higher authorities.

The British prime minister Johnson, working this weekend from his country retreat of Chequers, is on standby to talk to other European leaders to try to secure a deal that will underpin attempts to rebuild UK-EU relations after Brexit.

The same issues have dogged the talks from the beginning and remained unresolved at 11am on Friday as Mr Barnier and Lord Frost trudged back to the negotiating table: the so-called level playing field arrangements to ensure fair business competition, and EU access to UK fishing waters.

Both issues strike at the heart of the negotiations: Mr Johnson’s desire to regain sovereignty over Britain’s regulatory regime and fish, and the EU’s insistence that any deal granting access to its vast internal market of 450m people must come with strings attached.

A real sense of urgency now grips the negotiations and not just because time is running out before Britain’s Brexit transition period expires on January 1.

On Monday, MPs will start voting on Mr Johnson’s contentious legislation that would allow ministers to rip up parts of the UK’s withdrawal treaty with the EU relating to Northern Ireland.

The prospect of MPs voting to breach one EU treaty while negotiators simultaneously try to agree a new one has sent shudders through both sides. Charles Michel, European Council president, underlined that Britain had to fully respect its withdrawal treaty. 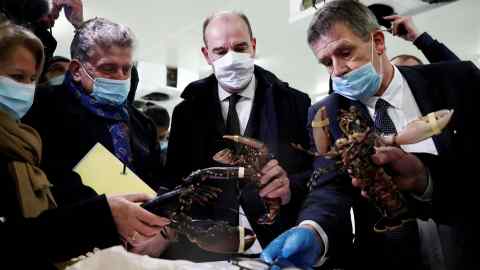 On Thursday the 27 EU leaders gather for a heads of government summit in Brussels, with both sides determined to settle the issue by then.

Talks in the “cave”, adorned with posters promoting Britain’s post-Brexit trading ambitions, have been dominated in part by neuralgic wrangling over how to carve up the EU’s existing fishing rights in British waters, worth around €650m each year, and hand some of them back to the UK.

UK officials complain that the EU side is reluctant to move beyond an old offer to sacrifice about 18 per cent of those fishing rights.

Over the past two days negotiators have haggled species by species, with talks taking place against a backdrop of incessant pressure from France for the EU not to sell out the sector.

Jean Castex, France’s prime minister, on Thursday headed to Boulogne-sur-Mer to warn that the country was ready to veto the fruits of Mr Barnier’s efforts.

Satisfying French president Emmanuel Macron will be a top priority for Brussels chiefs should a deal materialise, with Paris in the vanguard of a worried group of EU capitals that has coalesced during the course of this week.

There is always scope for compromises. That’s our basic attitude, even when there’s not much time left

The group — which also includes the Netherlands, Denmark, Belgium, Italy and Spain — is worried that too many concessions have been made to Britain and insists that it would be better for talks to drag on rather than for the EU to accept a bad deal.

During a debriefing with ambassadors on Wednesday and a separate session with senior advisers to national leaders on Thursday, the group insisted Mr Barnier stay at the negotiating table until he either secured a deal that protects their fishermen and safeguards their businesses, or talks ran aground.

France and the other countries are concerned that not just the European Commission but also Berlin might be prepared to accept a suboptimal deal, and they have called for advance scrutiny of whatever emerges from the talks before anyone hails a positive outcome.

The complaints were a visible sign of Mr Barnier coming up against the limits of his negotiating mandate, and upped the strain on exhausted EU negotiators after a six-week period of almost unbroken daily sessions with their British counterparts.

The constraints on Mr Barnier contributed to talks snarling up over the EU’s insistence on its right to rapidly dole out economic punishment to Britain if it were to breach the terms of a future relationship agreement.

Brussels is demanding so-called cross-retaliation rights that would allow it to, for example, hit UK manufactured goods with tariffs should Britain renege on its commitments on a level playing field.

Speaking to reporters on Friday, German chancellor Angela Merkel’s spokesman Steffen Seibert said: “There is always scope for compromises. That’s our basic attitude, even when there’s not much time left.”

The coming days will determine whether he is right.