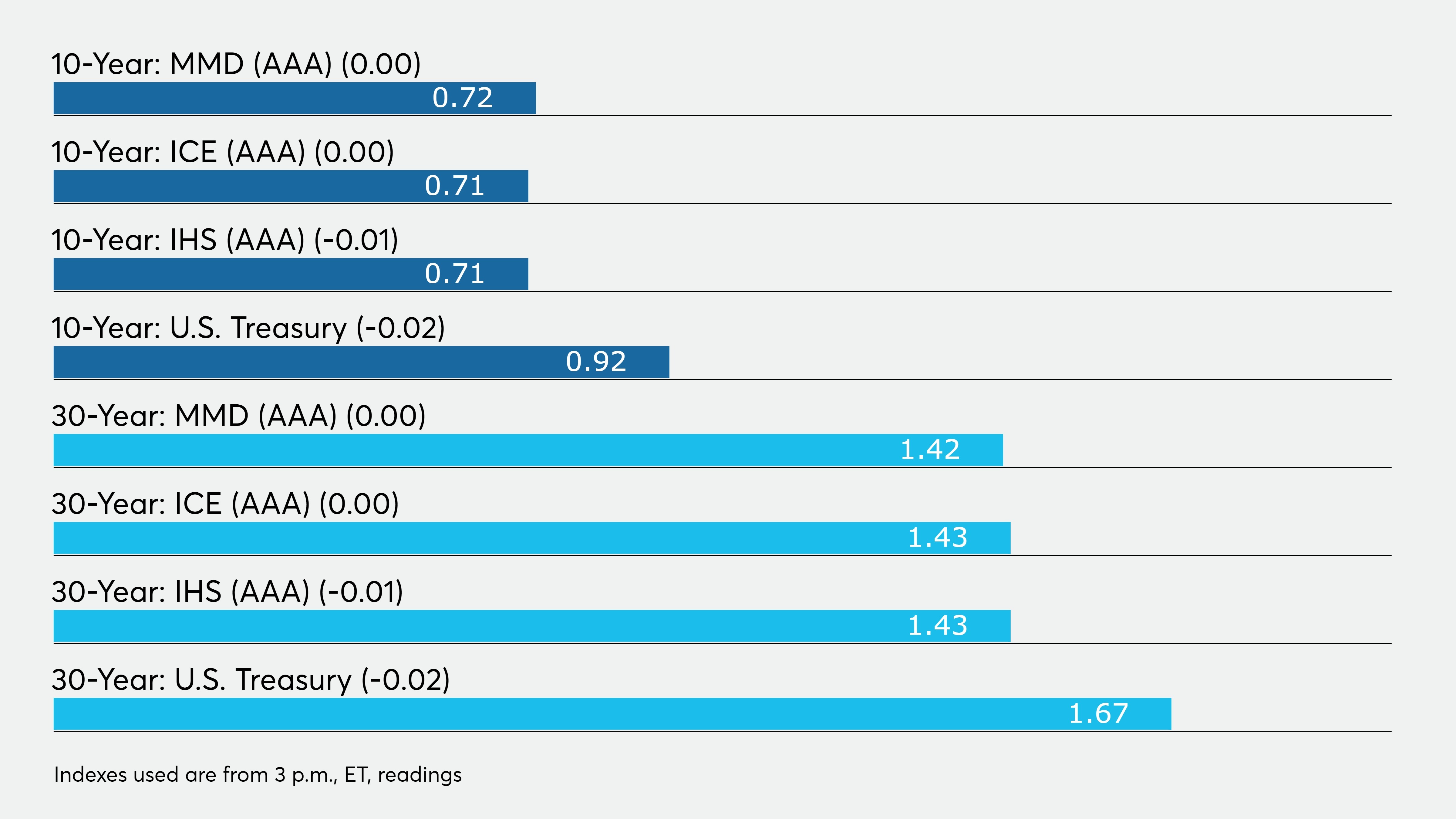 Municipal yields held steady on AAA benchmarks Thursday amid choppy trading that veered toward sideways as inflows, rich muni/U.S. Treasury ratios and not enough new paper have become status quo in the market.

Municipals are decoupled from U.S. Treasuries, which can clearly be seen in rich ratios (the 10-year muni as low as 70% of UST, down from 110% in the fall) which, while atypical, is not hard to see given the shortage of new issuance, especially high-grades, and investors clamoring for any cash.

With 10-year yield average of 1.01% and the 30-year at 1.75% in 2020, buyers are faced with intermediate levels half of what they were just after the COVID-19-led crisis adjustment in late-April.

Meanwhile, Refinitiv Lipper reported inflows at net $201 million for the week ending Dec. 2, down from $386 million the week prior.

Traders noted the transportation bonds didn’t come with the same concessions as the New Jersey GOs, traders said, so the same kind of gap up in the secondary (about 50 or 60 basis points) was not expected.

The repricings of New Jersey, the oversubscriptions on its deals, the trading up dramatically in the secondary, all point to investors’ faith in the market and that money is out there to put to work.

However, some traders noted the market is in a game of chicken with ratios/low absolute yields competing with redemptions/coupons for the end of 2020.

“Amid historically low absolute rates, coupon income could be more of a driver of municipal total returns in 2021, while revenue bonds may be poised to outperform general obligation pledges,” wrote Eric Kazatsky, senior U.S. municipals for Bloomberg Intelligence. “Technical support remains, though COVID-19-related effects are still an unquantified risk.”

Taxable debt, he notes, will continue to be an area to watch after a record issuance year. Many shops are predicting even more taxable munis in 2021 after a record 2020.

“There’s little doubt that the U.S. economy is in the midst of a recession,” Kazatsky wrote. “However, there does seem to be disagreement as to the depth and any timing of recovery, much of which hinges on COVID-19 vaccines. What is certain is that municipal bonds have proven to be a haven asset class with their uncorrelated risk profile and performance in prior recessionary periods.”

There is perhaps a sense settling in that COVID-19 credit concerns have generally mostly been priced in for municipals and the asset class is resilient and will make it through whatever is next.

PFM Financial Advisors and Independent Public Advisors are the financial advisors. Gilmore & Bell and White Coleman are the bond counsel.