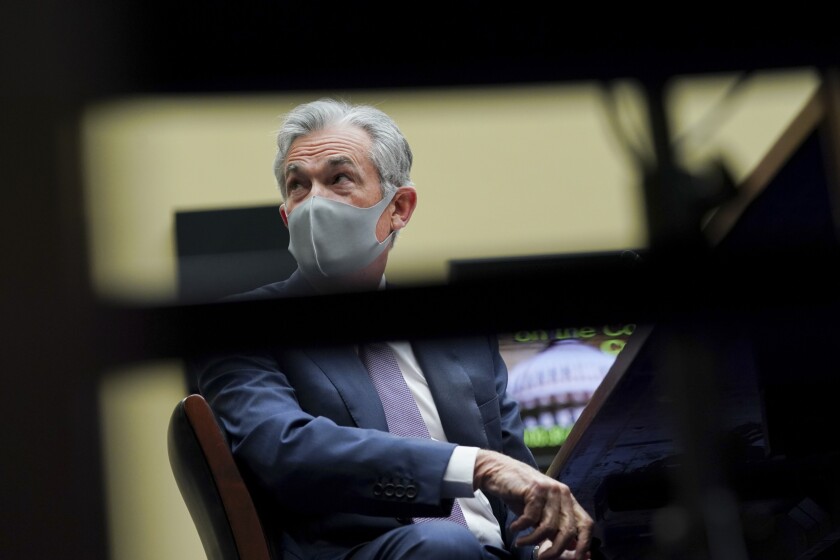 The Federal Reserve is in no hurry to taper its massive bond buying program, Chair Jerome Powell said Wednesday, though he didn’t signal that the U.S. central bank was ready to ramp it up either.

“Our priority remains supporting the economy until we are really well through this,” Powell told the House Financial Services Committee Wednesday, stressing the central bank’s determination to battle COVID-19. “We are going to keep our rates low and keep our tools working until we feel like we really are very clearly past the danger that is presented to the economy from the pandemic.”

Powell voiced optimism that recent vaccine developments heralded “very positive things to come” by the middle of next year, while stressing the need to help many American businesses and households get through what’s likely to be a tough winter.

Powell and his colleagues meet Dec. 15-16 and are expected to discuss the need for more monetary support as growth slows amid rising virus cases. A top subject for debate is whether to adjust the composition or scale of its $120 billion a month purchases of Treasuries and mortgage backed securities. Officials at their Nov. 4-5 meeting talked about updating their guidance on the strategy fairly soon, minutes of the gathering showed.

Some Wall Street economists have predicted the Federal Open Market Committee will shift its purchases to longer-term Treasuries or increasing buying to provide more stimulus to the economy as it faces headwinds from rising COVID-19 cases, hospitalizations and deaths.

While Powell gave no hint of a change, he made it clear the FOMC is nowhere near pulling back.

“The time will come to start thinking about balance sheet issues, and we have the model of what we did in the last financial recovery,” Powell said. “That time will come. It’s well into the future. I think we know how to do it. That’s slowly and carefully.”

“There is still a little period of very heightened uncertainty” because of the new wave of COVID-19 infections, the type of fiscal support to come, and how vaccines can turn the tide of the pandemic, he said. The economy faces a “difficult period of a hopefully continued economic expansion, but at a slower rate,” in the coming months.

That cautious tone was also echoed by the Fed’s Beige Book summary of current economic conditions, released later Wednesday, which showed regional weakness where the virus was spreading fastest.

The pandemic has hit Midwestern states especially hard, with three of four districts in the region seeing a slowdown last month amid surging cases, the Beige Book said, adding that most reported that firms’ outlooks remained positive but “optimism has waned.”

Fed officials have signaled they are likely to hold rates near zero through the end of 2023. At last month’s meeting, most FOMC participants were in favor of tapering asset purchases and ultimately ceasing them before raising rates. They have not put any timetable around the taper.

Powell said asset purchases in response to the 2007-2009 recession and aftermath prompted concerns the bond buying would spark inflation or create market distortions.

“We really didn’t see them,” Powell said. “We don’t want the balance sheet to be in the long run any bigger than it needs to be. But the main thing for us is to keep the support that the economy needs until we are confident that it no longer needs it.”

In his second day of testimony, Powell repeated his call to Congress to step up fiscal stimulus in response to the pandemic, focusing aid on unemployed workers, small businesses and state and local governments.

“There is a lot of work left to do there,” Powell said of aiding jobless workers. “There are just a lot of smaller businesses in their communities who will struggle to make it through this winter.”