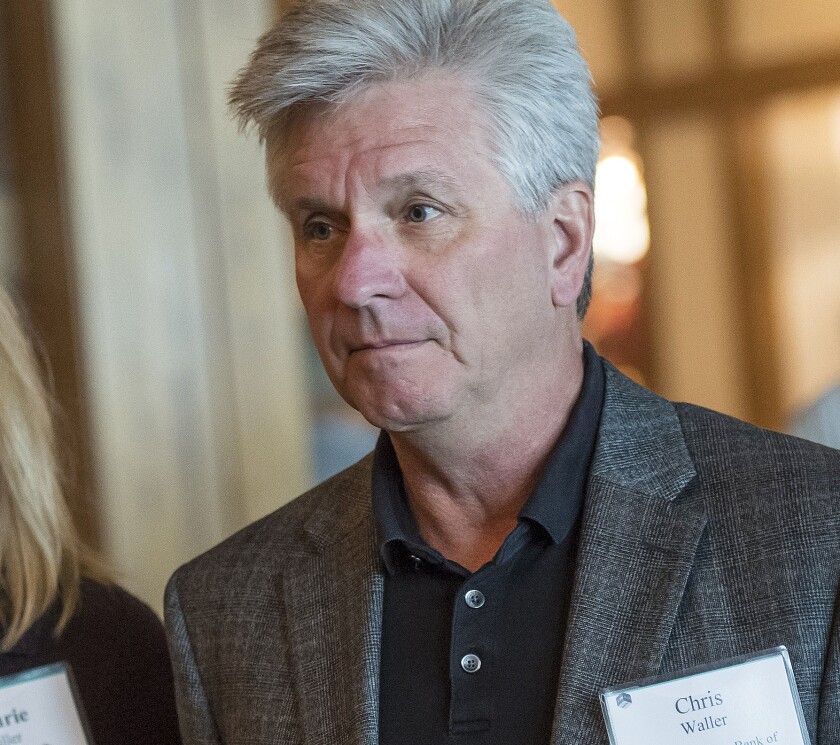 Senate Majority Leader Mitch McConnell set up a vote to advance the nomination of Christopher Waller to the Federal Reserve Board, potentially clearing the way for his confirmation later this week but leaving Judy Shelton’s path to the Fed uncertain.

McConnell took the action on Waller’s nomination shortly after the Senate came into session Monday afternoon. He ignored a question about whether he would try to revive President Donald Trump’s nomination of Shelton, a controversial pick whose confirmation all but collapsed before the Thanksgiving break.

Waller is research director at the Federal Reserve Bank of St. Louis, and his nomination and Shelton’s were advanced by the Senate Banking Committee to the Senate floor in July. While Shelton drew criticism from some Republicans as well as Democrats, Waller’s nomination hasn’t generated strong public opposition.

McConnell will lose the votes to confirm Shelton on Wednesday at noon, when Democrat Mark Kelly is expected to be sworn in to the Arizona seat he won in November’s special election over Republican Senator Martha McSally. Three Republican senators — Lamar Alexander of Tennessee, Mitt Romney of Utah and Susan Collins of Maine — have said they would join with Democrats to oppose Shelton. Kelly is expected to vote with the rest of his party, and that would leave the vote at 51-49 against Shelton.

“The question on the Shelton nomination is ultimately a decision the leader will have to make, but it will probably be predicated on attendance for one and whether or not we have the votes,” Thune said.

A vote to advance Shelton’s nomination was blocked Nov. 17 on a 47-50 vote, because Republican Senators Chuck Grassley of Iowa and Rick Scott of Florida were quarantined after being exposed to COVID-19. McConnell in a procedural maneuver changed his “yes” vote to “no,” giving him the option under Senate rules to hold a new vote later.

Shelton, 66, a former informal adviser to Trump, was long known for her advocacy of a return to the gold standard, ultra-hawkish views on inflation and opposition to federal deposit insurance. She provoked further controversy and opposition by abandoning those positions and calling for interest-rate cuts to align herself with Trump as she emerged as a candidate for a Fed post.

She has also questioned the relevance of the Fed’s mandate, set by Congress, to pursue maximum employment and price stability.