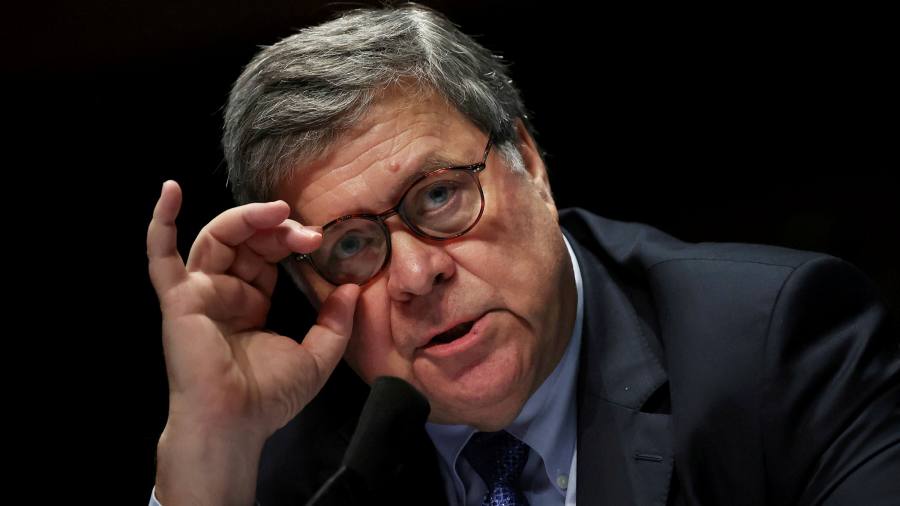 William Barr, the US attorney-general, said on Tuesday he had not seen evidence of voter fraud that would affect the outcome of the presidential election, directly undermining Donald Trump’s claims the vote was stolen from him.

The intervention by Mr Barr in an interview with the Associated Press, was a high-profile rebuke of the president’s unsubstantiated claims of a vast Democratic conspiracy to manipulate voting machines and mail-in ballots to ensure Joe Biden’s victory.

Mr Barr, who has been a stalwart ally of Mr Trump, had before the election echoed the president’s warnings about mail ballot fraud. After the vote, the attorney-general had stoked Democratic concerns by authorising immediate investigations into election fraud.

“To date, we have not seen fraud on a scale that could have affected a different outcome in the election,” Mr Barr told the AP. He added that he had looked into allegations that voting machines were compromised but “we haven’t seen anything to substantiate that”.

Rudy Giuliani, Mr Trump’s attorney, and Jenna Ellis, a senior campaign legal adviser, responded in a statement: “With the greatest respect to the attorney-general, his opinion appears to be without any knowledge or investigation of the substantial irregularities and evidence of systemic fraud.”

Shortly after the interview was published, Mr Barr was seen visiting the White House. Responding to Mr Barr’s comments, Chuck Schumer, the top Democrat in the Senate, told reporters: “I guess he’s the next one to be fired.”

Mr Barr’s comments came after key battleground states in which Mr Trump has contested the results have certified Mr Biden as the winner. The president has mounted an unprecedented and, so far, unsuccessful bid to cling to office through a combination of lawsuits and overtly pressuring Republican state officials to try to throw the election to him.

Mr Trump has made unevidenced allegations of fraud in and out of court, ranging from illegal mail ballots to the fabrication of millions of votes through compromised voting machines. His lawsuits have been repeatedly rejected by the courts, including by Republican-appointed judges and, in one case, an appointee of the president himself.

As his efforts have failed, he has turned his ire on Republicans like the governors of Georgia and Arizona who certified Mr Biden’s victories in their states. In a Fox News interview on Sunday, Mr Trump speculated that even his own administration might have been in on a supposed plot against him.

The president’s comments that the election was in effect pre-determined has caused trouble for Republicans in Georgia, where a run-off for two Senate seats in January will determine whether Congress is controlled by Democrats or divided between the two parties. Republicans need their base to turn out in spite of Mr Trump’s claims that the system is rigged.

Mr Barr is the most significant Trump administration official yet to reject the president’s claims. Mr Trump last month fired Chris Krebs, then director of the Cybersecurity and Infrastructure Security Agency, after Mr Krebs publicly stated that the election had been the “most secure” in history.

Despite beginning the transition last month, repeatedly losing in court, and failing to alter the outcome through recounts, Mr Trump and his allies have continued to file legal challenges. On Tuesday, the Trump campaign said it had filed a new lawsuit in Wisconsin, where a partial recount requested by the president affirmed that Mr Biden had won the state — and slightly increased the former vice-president’s margin of victory.

After a historic 2020 election, stay on top of the biggest themes driving US politics, business and markets from Washington, New York and beyond with Rana Foroohar and Edward Luce. Sign up here