Joe Biden, the US president-elect, on Monday unveiled an economic team that sought to balance experienced Democratic policymakers who will be well-received by markets and business with more progressive economists.

The nominees included Janet Yellen, the former Fed chair, as Treasury secretary, and Neera Tanden, a former senior aide to Hillary Clinton and president of the Center for American Progress think-tank, as budget director. Wally Adeyemo, the president of the Obama Foundation and a former international economic official, was tapped to be deputy Treasury secretary by Mr Biden.

Combined with the expected selection of Brian Deese, a BlackRock executive, to be director of the National Economic Council, the picks signalled Mr Biden’s preference for pragmatic centre-left policymakers in his effort to spur the US recovery amid the pandemic shock, at a time when his ambitions will be limited by a closely divided Congress.

However, Mr Biden also chose a trio of progressive economists — spearheaded by Cecilia Rouse of Princeton University — to lead the White House’s Council of Economic Advisers, which effectively serves as the president’s internal think-tank on economic matters. Ms Rouse will be flanked by Jared Bernstein, Mr Biden’s former chief economist while he was vice-president, and Heather Boushey, an economist specialising in income inequality.

“This is the team that will deliver immediate economic relief for the American people during this economic crisis and help us build our economy back better than ever,” Mr Biden said in a statement.

“This team is comprised of respected and tested groundbreaking public servants who will help the communities hardest-hit by Covid-19 and address the structural inequities in our economy,” he added.

Of the group, Ms Tanden is most at risk of being blocked in the confirmation process. Senior Republicans have indicated their opposition to her nomination, and even some progressive Democrats believe she is too centrist, pointing to her support for deficit reduction measures during the Obama administration.

However, the political calculations surrounding the Senate confirmation of Mr Biden’s appointments will hinge on the outcome of the two run-off races for upper chamber seats in Georgia, which will be decided in early January.

Jen Psaki, selected by Mr Biden as White House press secretary, touted Ms Tanden’s aptitude for the job in a message on Twitter on Monday, calling her a “brilliant policy expert and she knows how vital funding for government programmes is”. 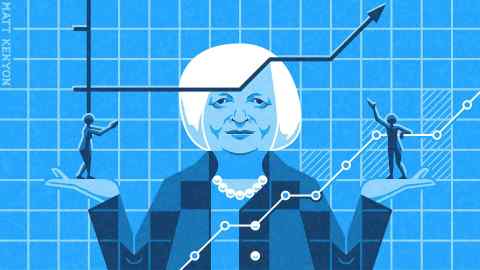 Ms Yellen is expected to face a much smoother ride to confirmation, and even some Republicans are expected to back her selection.

“Janet Yellen demonstrated her intellect, foresight, and independence during the financial crisis, and throughout her term as Fed chair,” said Patrick McHenry, the top Republican on the financial services committee of the House of Representatives. “I think it’s important we have credible and experienced people to serve at the highest levels of government.”

After Mr Biden’s announcement on Monday, Ms Yellen made her debut on Twitter with a call to confront the “great challenges” facing America.

“To recover, we must restore the American dream — a society where each person can rise to their potential and dream even bigger for their children,” she wrote.

Ms Yellen emerged as the leading candidate for the Treasury department because she was more palatable to the leftwing of the Democratic party than another top contender for the job, Lael Brainard, the Fed governor.

Progressive activists will be most energised by the composition of the CEA, in the hope that Mr Biden can deliver on his campaign’s economic platform, which called for an aggressive spending plan funded partially by tax increases on the wealthy, to help the economy recover from the pandemic while redressing systemic income and racial disparities.

“This job is about advising the president on how to rebuild and revive our economy. The planning for a fairer economy, grounded in facts and evidence, begins now,” Ms Rouse said on Twitter on Monday.

Mr Biden is expected to present the first slate of economic appointments including Ms Yellen, Ms Tanden and Ms Rouse on Tuesday in Wilmington, Delaware. However, several top cabinet positions that play a role in shaping economic policy have yet to be filled, including US trade representative, commerce secretary, labour secretary and transportation secretary.