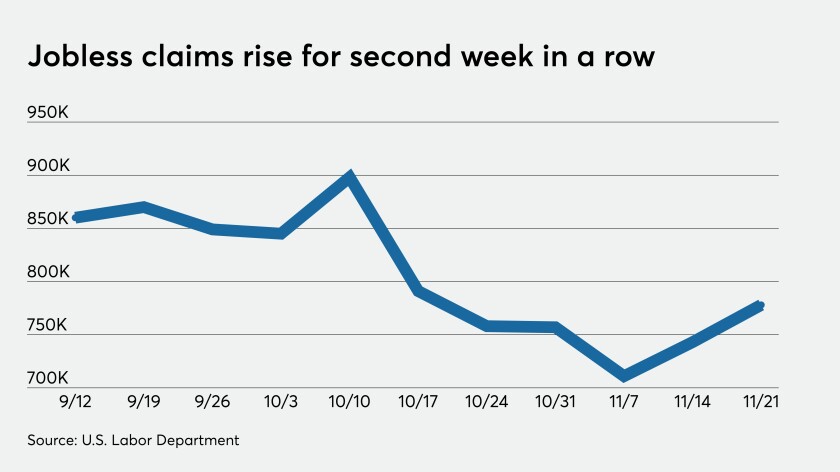 The pre-thanksgiving feast of economic data released on Wednesday showed momentum seen earlier in the quarter is waning, according to one analyst, while another saw “malaise,” as the number of coronavirus cases rises and governments add restrictions.

“After the data today, it does appear as if the momentum from the start of the quarter is slowing but in general, the numbers show continued improvement,” according to Kevin Flanagan, head of fixed income strategy at WisdomTree.

“Real time” numbers, like jobless claims for example, are showing signs of weakness.

Jobless claims climbed to a seasonally adjusted 778,000 in the week ended Nov. 21 from the previous week’s upwardly revised level of 748,000, originally reported as 742,000, the Labor Department said Wednesday.

Economists projected 728,000 claims in the week.

Continuing claims dropped to 6.071 million in the week ended Nov. 14, from a downwardly revised level of 6.370 million a week earlier, first reported as 6.372 million.

GDP
The second read of gross domestic product showed it grew 33.1% in the third quarter GDP, same as the advance reading, as expected by economists.

“The broader economy, gross domestic product more specifically, will be close to where we were pre-pandemic by the end of the year,” Flanagan said. “If we can get an increase of 5% or so in GDP for the fourth quarter, we will only be 3.5% below February levels.”

“The most important number is whatever fits the market’s narrative, and with this data, the market did not get something it can grasp onto for clarity,” said Steve Sosnick, chief strategist at Interactive Brokers. “I would say the overall tone today is malaise.”

Excluding transportation, orders grew 1.3% in the month, after a 1.5% jump a month earlier.

Economists polled by IFR Markets estimated orders would be up 1.0% and 0.4% excluding transportation orders.

“Durable goods is noisy, and I would call the results a mild negative,” said Sosnick.

Michigan sentiment
The University of Michigan’s final consumer sentiment index for November dipped to 76.9 from 81.8 in October.

Economists expected 975,000 sales in the month.

“Housing has been and continues to be a strong spot,” said Sosnick. “The headline number was underwhelming but the year-over-year numbers are attention grabbing.”

Personal income
Personal income slipped 0.7% in October after a 0.7% increase a month earlier, the Commerce Department reported. Personal spending grew 0.5% in the month after a 1.2% rise in September.

Economists predicted income would gain 0.1% and spending would rise 0.3%.

“Spending was sharply lower, and with weaker employment, weaker income is not a good sign,” Sosnick said.