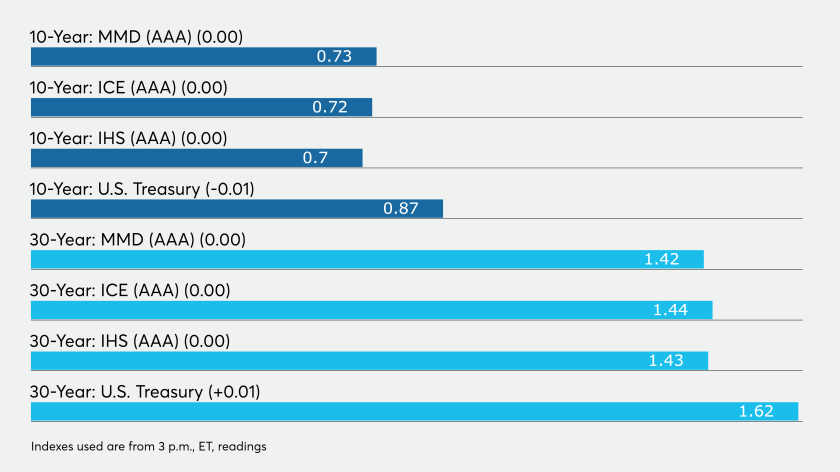 The municipal market firmed Wednesday as it got ready for the Thanksgiving holiday and looked ahead to next week’s supply slate.

IHS Ipreo estimates volume for the week of Nov. 30 will be $7.68 billion, up from the under $1 billion seen this week. The calendar is composed of $6.99 billion of negotiated deals and $688 million of competitive sales.

In secondary trading, municipals were steady. Yields on top-quality munis were unchanged on the AAA scales, with Treasury bond yields mixed. Equities were mixed in late trading.

Heading into the holiday, the tone reflected a muted bias as cash-flush investors did some pre-holiday shopping.

“After a noted absence, retail has been putting money to work through November given reinvestment needs,” said Jeff Lipton, head of municipal credit and market strategy at Oppenheimer & Co.

But not all retail investors are spending their available cash. “Having said this, the market has become richer and there still remains retail resistance,” he said.

Overall, Lipton continues to believe technicals will usher in some additional performance through year-end.

Financial markets are closed on Thursday and open for a half-day of trading on Friday, but only the most die-hard of traders will be working with most people taking the day off.

Thanksgiving came early for those municipal investors who were looking for yield as bond buyers gobbled up Tuesday’s JFK Airport deal, leaving barely any scraps remaining in an otherwise quiet market ahead of the upcoming holiday.

“It’s been a busy couple of travel days before Thanksgiving — the busiest it’s been since COVID broke — and there are good headlines around airports, so that got people excited,” a New York trader said.

“There’s no supply and a lot of money coming in — so the supply/demand imbalance is leaning toward the demand component right now — especially in the high-yield sector,” he added. “It’s interesting, because people wouldn’t touch airport paper six months ago.”

He said the combination of supply scarcity and seasonal factors helped prop up the airport industry in conjunction with the JFK pricing causing the deal to get devoured by hungry investors. “I heard it was very well received — and that was an understatement. There are no bonds around,” he said.

“As the economy gets back on its feet, you’re going to see the credits that got beat up the most — airports, convention centers and tourist and tax-driven sectors — those are really coming back in line,” he said. “It will take some time, but we still have some positive news out there — and airports will be the first to come back as people begin to travel.”

ICI said the total combined estimated inflows from all long-term mutual funds and ETFs were $11.488 billion after an inflow of $41.451 billion in the previous week.

In the competitive arena, the Metropolitan St. Louis Sewer District., Mo., is selling $120 million of Series 2020B wastewater system revenue bonds on Thursday. PFM Financial Advisors and Independent Public Advisors are the financial advisors. Gilmore & Bell and White Coleman are the bond counsel.

The average seven-day simple yield for the 187 tax-free and municipal money-market funds remained at 0.01% from the previous week.

Taxable money-fund assets decreased $1.65 billion in the week ended Nov. 24, bringing total net assets to $4.152 trillion. The average, seven-day simple yield for the 781 taxable reporting funds remained at 0.02% from the prior week.