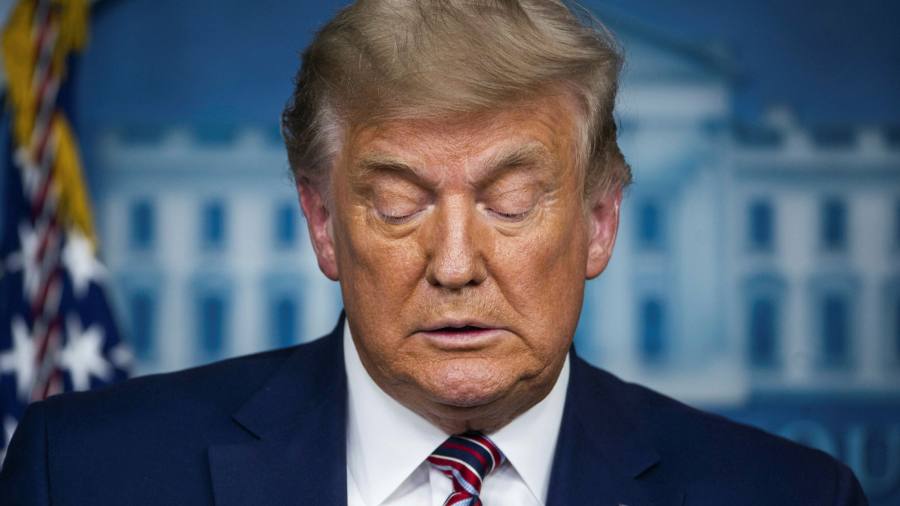 Donald Trump said on Monday his administration would begin co-operating with Joe Biden’s transition team, bowing to Republican pressure to start the transfer of power even as he vowed to continue contesting his election loss.

The president’s statement, which stopped short of a formal concession, came after a Michigan board certified the state’s election results and GOP senators, along with business leaders, pressed Mr Trump to start the transition.

Mr Trump said on Twitter he had recommended that the General Services Administration, the agency that provides transition resources, “do what needs to be done with regard to initial protocols”.

The president added that he had “told my team to do the same”, saying it was “in the best interest of our Country”.

The move, twenty days after the election, followed a string of resounding courtroom defeats for Mr Trump and the certification of Mr Biden’s win in key states like Georgia and Michigan.

Mr Trump has mounted an unprecedented effort to overturn the results of the election through litigation and overtly pressuring state election officials, tactics that have both failed so far.

The administrator of the GSA, Emily Murphy, an appointee of Mr Trump, said in a letter on Monday to Mr Biden that she was releasing funds for his transition. The letter was published by CNN.

Republican senators had begun in recent days to call on Mr Trump to begin the transition, including on Monday Lamar Alexander of Tennessee and Shelley Moore Capito of West Virginia.

Mr Alexander said the election was “rapidly coming to a formal end” and called on Mr Trump to “put the country first and have a prompt and orderly transition”.

“When you are in public life, people remember the last thing you do,” Mr Alexander, who is retiring after this year, added in a statement.

Earlier, Ms Capito issued a similar call, saying there was “no indication” of any fraud that would overturn the results of the election.

The letter warned that further delays to the transition threatened US attempts to control the public health and economic crises caused by Covid-19.

Earlier on Monday, a four-person bipartisan board in Michigan dealt a blow to Mr Trump as it certified the more than 150,000 vote margin by which Joe Biden won the battleground state.

The state, where a four-person bipartisan board must approve the election results, had been one of the president’s best hopes of derailing the electoral process. A deadlock would have led to litigation or, in extreme circumstances, the intervention of the state’s Republican-controlled legislature.

Mr Trump and his allies have been pressuring Republican election officials in Michigan and elsewhere to refuse to affirm Mr Biden’s win or throw out ballots in an attempt to create an opening for the president to reverse his loss.

The Republican vice-chairman of the Michigan board of canvassers, Aaron Van Langevelde, defied that pressure on Monday as he voted with two Democrats to approve the state’s results. A second Republican, Norman Shinkle, abstained.

“As John Adams once said, we are a government of laws, not men, and this board needs to adhere that principle here today,” said Mr Van Langevelde at a public board meeting, explaining that Michigan law gave him no discretion to vote otherwise.

The meeting of the board of state canvassers was unlike any in Michigan’s history. The state board of canvassers has always certified presidential results unanimously and with little fanfare.

But the stakes had been raised by the brief deadlock of a similar county-level board last week and the overt pressure Mr Trump has placed on state officials in Michigan and elsewhere.

Around 30,000 people tuned in to the livestream and hundreds of Michigan citizens spoke at the meeting, many of them urging the board to certify its results.

The Trump campaign on Monday dismissed certifications as a “simply a procedural step” and said it would continue to challenge the results. In the days after the November 3 polls, campaign officials had held up the fact that the vote had not been certified to argue the election was not over.

“[F]ailures to include a handwritten name, address or date in the voter declaration on the back of the outer envelope, while constituting technical violations of the Election Code, do not warrant the wholesale disenfranchisement of thousands of Pennsylvania voters,” the court ruled.

Counties in Pennsylvania have a Monday deadline to certify their results to state officials, though a small number appeared set to miss that deadline. Mr Trump on Saturday lost a case that sought to block the certification process, but the president’s campaign has appealed.

Georgia, where Republican election officials certified Mr Biden’s win last week, is set to begin on Tuesday a recount requested by the Trump campaign. The recount, which will be conducted by machine, is not expected to change the result. An already-completed hand recount did not significantly alter Mr Biden’s margin of victory in the state.

After a historic 2020 election, stay on top of the biggest themes driving US politics, business and markets from Washington, New York and beyond with Rana Foroohar and Edward Luce. Sign up here