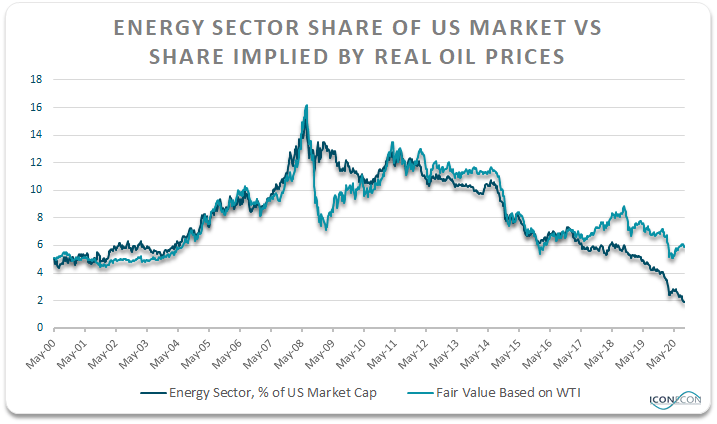 We have been accumulating XLE over several months as we expect energy stocks to act as a relative safe haven amid an increasingly likely collapse in the U.S. tech sector. We expect to see XLE double over the next 12 months relative to the NDX and although we are not relying on it, we could easily see more days like today where the XLE rises as the broader market sells off.

Fundamental Case Is Clear Despite The Widespread Pessimism

From a fundamental perspective we have highlighted the bullish case for XLE a number of times over recent months, which boils down to extremely cheap valuations relative to both the price of oil and the stock market as a whole. We are fully aware of all the reasons not to buy energy stocks: ESG concerns, stranded assets, structurally declining demand etc. However, it is these widespread and well-documented concerns that have resulted in valuations falling to such attractive levels.

The following chart perhaps best illustrates just how extremely cheap the XLE is relative to oil and the SPX. It shows the energy sector’s share of the SPX pitted against the inflation-adjusted price of WTI. While real oil prices remain near multi-year lows, the historical correlation between the two suggests that the energy sector should represent closer to 6% of the SPX’s market cap rather than the current 2%. 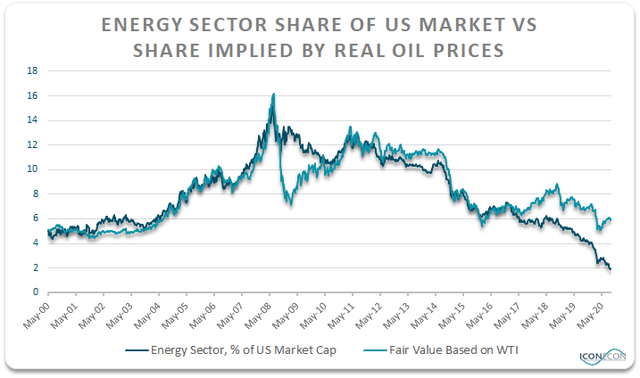 This is not to say that we expect to see the energy sector triple its market cap. The energy sector’s low weighting in the SPX in large part reflects the fact that the broader market is about the most expensive it has ever been on most metrics. In absolute terms XLE is no bargain, but relative to the broader market it is an absolute screaming giveaway. In order for the XLE to continue its underperformance relative to the broader market we would likely need to see oil prices undergo another almighty collapse, which seems unlikely considering the once-in a-lifetime crash seen earlier this year.

A Repeat Of 2000 Increasingly Likely

While we are not expecting to see XLE rise as the broader market declines, today’s strong gains amid broader market weakness may become increasingly common. Sentiment towards the energy sector is at rock bottom and a slight rotation out of tech and into energy could be enough to see the XLE rise even amid a declining overall market. It is worth bearing in mind that the NDX fell 70% in the 12 months following its March 2000 peak, while the XLE posted double-digit gains.

XLE is at an important technical juncture with neckline support-turned-resistance coming in just above current levels. A close above $35 would suggest an end to the downtrend in place since the June highs. Meanwhile, a break above down trendline support from the December highs, which currently comes in at around $37, would indicate that the second wave of the recovery off the March lows is beginning.

Disclosure: I am/we are long XLE. I wrote this article myself, and it expresses my own opinions. I am not receiving compensation for it (other than from Seeking Alpha). I have no business relationship with any company whose stock is mentioned in this article.

Refinancing your mortgage will cost more thanks to an ‘adverse market’ fee
HTD: 8.6% Yielding Utility And Preferred Fund For Attractive Income
Stocks making the biggest moves in the premarket: Oracle, Tesla, Home Depot, Beyond Meat & more
Trump to nominate successor to Ginsburg next week
Introduction to the Zacks Rank Series