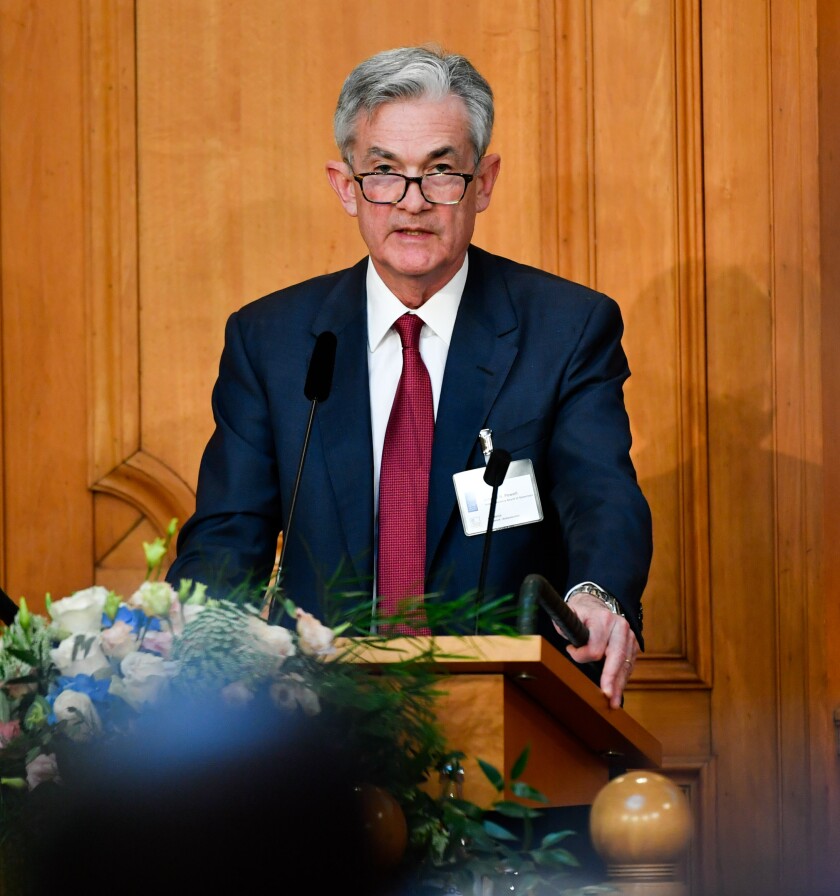 Federal Reserve Board Chairman Jerome Powell said the economy seems to be slowing anew as many states see coronavirus cases rising, and the Fed will do what it needs to do and doesn’t expect to raise rates anytime soon.

The post-meeting statement from the Federal Open Market Committee said the path of the economy will “depend significantly on the course of the virus.”

Responding to a question after the panel left interest rates at a range between zero and 0.25%, as expected, the chair said, “it’s too early to say how large and how sustained” the economic slowing, seen after the virus picked up again in mid-June, will be. He mentioned that housing and auto sales were doing well, but consumer spending appears to be slipping.

“The Committee expects to maintain this target range until it is confident that the economy has weathered recent events and is on track to achieve its maximum employment and price stability goals,” said the official statement.

Richard Barrington, senior financial analyst for MoneyRates.com, said the Fed has “painted itself into a tight policy corner,” and has “little room to respond to the current crisis.”

Powell expects that even after the health crisis is over, “there will be a need, both from us and in terms of a fiscal policy.” And while he said the Fed believes “our current monetary policy stance is the right one,” the panel remains “prepared to change policy if and when we deem it appropriate to do so.”

Mike Fratantoni, senior vice president and chief economist of the Mortgage Bankers Association, said the Fed’s commitment to continuing to purchase mortgage backed securities at least at current levels will “keep the mortgage market functioning smoothly, even with the profound uncertainties regarding the future path of the pandemic and the economy.”

But, perhaps after the September meeting, he added, “we expect that the Fed may strengthen their forward guidance on the future path of interest rates,” offering “more explicit signals as to which factors could lead them to eventually raise short-term rates,” Fratantoni said.

Phil Toews, CEO and portfolio manager at Toews Corporation, said the market is operating under the assumption that the Fed will do whatever is needed to support the market, and, as long as it doesn’t disappoint, bond market reaction should be limited. “That said, with the Federal Reserve all in, positive news for bonds seems unlikely unless major new initiatives are introduced,” he said.

Gary Pzegeo, head of fixed income at CIBC Private Wealth Management, said “not much” was expected from the meeting and “not much” was delivered. “The Fed’s message is consistent with that delivered in June with the added note of a pick-up in economic activity, albeit well below that seen at the beginning of the year,” he said. “Minutes from the last meeting highlighted active discussions over more specific forward guidance, and more questions than answers on the concept of yield curve control.”

Christian Scherrmann, U.S. economist at DWS Group, agreed. “As universally expected, July’s FOMC turned out to be a bit of a non-event,” he said. “Rightly so, as the Fed finds itself in quite a comfortable position. Markets have well understood that accommodative monetary policy is here to stay. This supports the nascent recovery, without the Fed having to do all that much just now. While economic activity picked up somewhat, the future path of the economy remains ‘extraordinarily uncertain’ and the pandemic is setting the speed of the recovery.”

“It is quite surprising and remarkable that, in the midst of a global pandemic, contract activity for home purchases is higher compared to one year ago,” NAR Chief Economist Lawrence Yun said. “Consumers are taking advantage of record-low mortgage rates resulting from the Federal Reserve’s maximum liquidity monetary policy.”