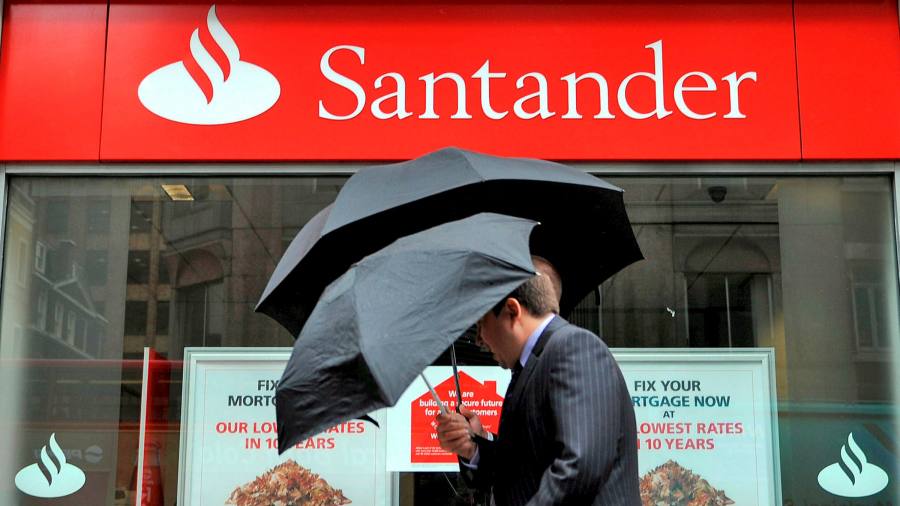 Santander slumped to a €11.1bn loss in the second quarter after the coronavirus pandemic forced the eurozone’s largest retail bank to take large writedowns on the value of several of its businesses, led by its UK arm.

The Spanish lender wrote off €6.1bn of goodwill left over from the purchases that created Santander UK in the 2000s. Together with a €1.5bn writedown last September, the value of the UK business on Santander’s balance sheet has now fallen by almost 90 per cent over the past year. However, the bank insisted the impairments “do not change the strategic importance of any of the group’s markets or businesses”.

Jose Garcia Cantera, Santander chief financial officer, said: “We remain quite confident about the UK, it’s a very important business for us . . . the underlying attractiveness of UK banking remains intact.”

In total, the bank wrote off more than €10bn in goodwill across its historic acquisitions, plus €2bn in deferred tax assets that it no longer expects to recover.

Despite the hits, which it blamed on “the deterioration in the economic outlook”, Santander on Wednesday stressed the strength of its underlying business by reporting stronger than expected capital levels and committing to resuming dividend payments as soon as regulators allow.

Mr Cantera said the bank “entered this crisis in a much stronger position than we’ve ever been, and we feel very comfortable about continuing to support the economy . . . we are showing our model still works.”

Santander reported revenue of €10.7bn for the quarter, down 13 per cent from a year ago, primarily due to the impact of foreign exchange movements. Excluding currency fluctuations, revenue dropped 3 per cent. The company also made solid progress in cost-cutting plans, with operating expenses down 4 per cent after excluding currency movements.

As a result, the bank’s preferred underlying profit measure, which excludes the goodwill and DTA impairments, fell a more modest 15 per cent, to €1.5bn. It put aside an additional €3.1bn to deal with loan losses, compared with €3.9bn in the first quarter.

Santander’s common equity tier one ratio, a key measure of balance sheet strength, ended the period at 11.84 per cent, at the upper end of its full-year target range of 11 to 12 per cent.

Shares in the Spanish lender have long been weighed down by concerns about relatively low capital levels, but the company has insisted its diversified business means it is more resistant to economic shocks than rivals.

The lender also said it had put aside capital in the quarter to contribute to a potential future cash dividend. In the meantime, it committed to pay a share-based dividend, equivalent to 10 cents per share for 2019.

Also on Wednesday, UK lender Barclays added a further £1.6bn to its reserves for bad loans in the second quarter, and credit impairment charges more than tripled from £408m in the same period last year.

A day earlier, the European Central Bank ordered banks in the eurozone to continue to freeze cash dividend payments until at least next January.

Mr Cantera said Santander would have preferred the central bank take a “more personalised approach” to deciding which banks could pay dividends.

“A general rule is a bad idea in the sense that it increases uncertainty about the sector, increases the cost of equity of the sector, and affects valuations.”