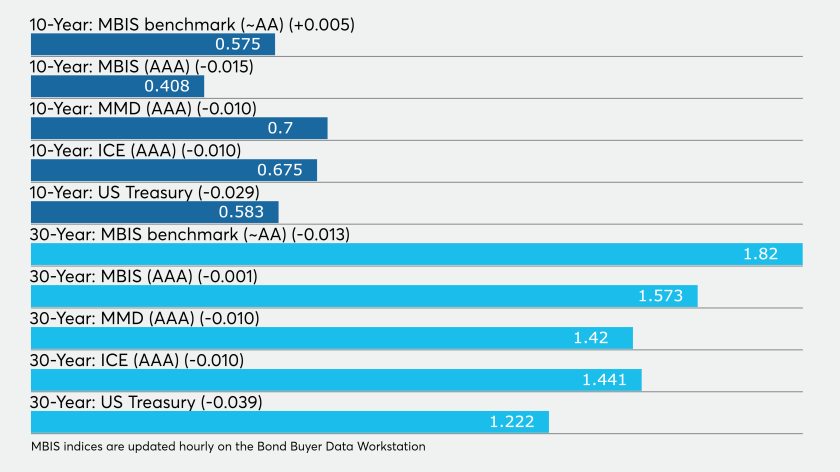 Municipal yields were steady to stronger on the long end Tuesday as Colorado sold notes and Seattle offered bonds, but those long-dated, smaller-coupon bonds are enticing investors.

“Yields have reached epic lows in this market given the current climate and traders are mostly stranded. It’s no longer a ‘holding pattern,’ but rather it is a place in which we just don’t know where to go and when the gas will run out,” a Chicago trader said.

Credit quality is a concern and traders have been flocking more toward those high-grade names.

And the primary continues to push levels in the direction that issuers and investors want to see.

Primary market
In the competitive arena, Colorado began the first of its $1 billion offering of tax and revenue anticipation notes.

On Tuesday, the state sold $410 million of Series 2020A education loan program TRANs.

RBC Capital Markets was the financial advisor and Kutak Rock was the bond counsel.

On Tuesday, Moody’s Investors Service issued a report on the state of Colorado. (Aa1/stable outlook). It said the state began its new fiscal year by excluding a $225 million supplemental pension contribution to the state Public Employees’ Retirement System.

“The pension contribution pullback is credit negative for Colorado and its local school districts, because it will simply defer the pension costs to later years and allow the associated unfunded liability to grow at a compounding rate of 7.25% (PERA’s assumed rate of investment return and discount rate for calculating its liability),” said Tom Aaron, vice president at Moody’s.

“Colorado’s budget quandary also highlights the financial exposure of state governments to underfunded teacher pension systems generally, even where the obligations are not directly accounted for on the state balance sheet, due to their broad control over and support for K-12 education,” he said.

The state will be in the market again on Thursday when it will sell $600 million of Series 2020 general fund TRANs. Stifel is the financial advisor and Sherman & Howard is the bond counsel.

The issue was designated as green bonds and verified by Kestral.

Wells Fargo Securities won the bonds with a true interest cost of 2.1067%.

Piper Sandler was the financial advisor; Stradling Yocca was the bond counsel.

On Thursday, Morgan Stanley is set to price the cities of Dallas and Fort Worth, Texas’ (A1/A/A+/AA) $1.139 billion of Series 2020C taxable joint revenue refunding bonds for Dallas Fort Worth International Airport on Thursday.

Municipals were steady on the short end Tuesday, according to readings on Refinitiv MMD’s AAA benchmark scale.

Munis were little changed on the MBIS benchmark and AAA scales.

Treasuries were weaker as stock prices traded down.