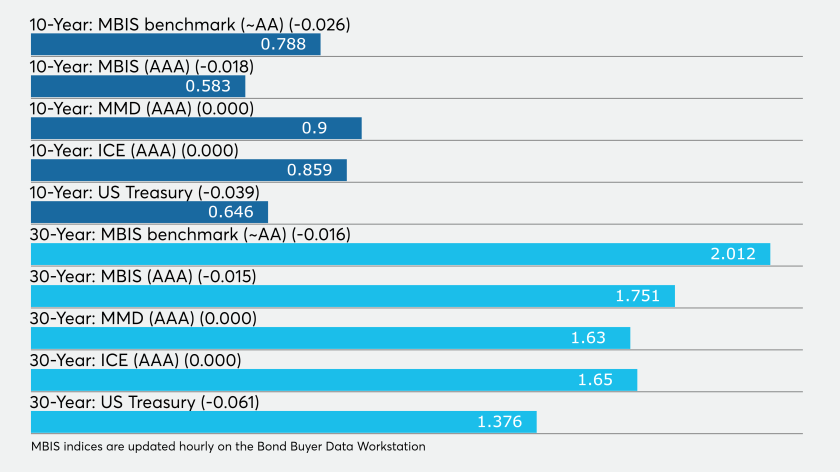 It won’t feel like a short holiday week, as issuers expect to sell more than $7 billion of notes and bonds as the quarter and first half come to an end.

Social bond issuance has been on the rise this year. Earlier this month, the Ford Foundation sold $1 billion of social bonds to help provide direct grants to needy non-profit organizations suffering from the economic effects of the COVID-19 pandemic.

“In May 2020 social bond volume alone was over $12.6 billion, or on par with full year 2019 totals,” said Maria Dikeos, global lead in loans contributions at Refinitiv LPC. “The concept of social lending is not new — it has been a cornerstone of lending among multilateral development banks for many years — but the discussion and focus has been broadened to include commercial banks.”

She said social bonds are even more important now.

“Real time headlines and the repercussions of the COVID-19 pandemic have made social bond and loan assets more relevant as socio-economic empowerment comes hand-in-hand with meaningful financial investment and corporate influence,” Dikeos said.

Heading up the slate of big note sales is Los Angeles County, Calif.

Following close behind is the Port Authority of New York and New Jersey, which is selling $1.1 billion of taxable notes. Citigroup is expected to price the deal on Tuesday.

The Philadelphia School District, Pa., is offering up $550 million of tax and revenue anticipation notes.

BofA is set to price the TRANs on Tuesday.

“We are strong right across the board and deals were well received,” a New York trader said, noting the 10-year yield dipped to 0.65% on Friday afternoon.

He said there is a glut of available cash, however, with “scary” fractional yields on the short end, so it’s a Catch-22 for investors.

“The 10-year went back down to 0.65% and percentages are OK, but absolute yields are not attractive for individuals so much,” he said.

With significant July 1 redemptions approaching, the trader said, the imbalance will worsen.

“There is a ton of money coming due to maturing bonds,” he said, but so far the calendar for the post-holiday week is bleak, except for a $1 billion New York New Jersey Port Authority deal which is structured as a fully taxable deal with a bullet in 2023.

“With so many bonds coming due it could be another squeeze,” he said.

Since the liquidity crisis in March has normalized, most good credits are seeing tight bid-offer spreads, according to Brigati.

Issues that have been initially compromised due to the COVID-related shutdown are being more highly scrutinized, he said, noting those credits are being analyzed according to what federal assistance they may receive.

“Credits that have challenging revenue, cash flow, or headline risks are experiencing some liquidity issues; but this creates the need for price discovery,” he said.

The New York trader agreed, saying, there is an increased need for credit analysis given the COVID-19 impact still being felt by the market.

“They have to be very conscious of credits and really watch what’s happening with state budgets, the lack of money, and the decline of revenue for sales tax bonds,” he warned.

Lipper reports $1.5B inflow
Investors remained bullish on municipal bonds and continued to put cash into bond funds in the latest reporting week.

In the week ended June 24, weekly reporting tax-exempt mutual funds saw $1.475 billion of inflows, after inflows of $1.710 billion in the previous week, according to data released by Refinitiv Lipper Thursday.

It was the seventh week in a row that investors put cash into the bond funds.

The four-week moving average remained positive at $1.787 billion, after being in the green at $1.692 billion in the previous week.

Secondary market
Muni bond yields have been on the move, heading lower over the past month, according to Kim Olsan, senior vice president at FHN Financial.

“Current levels are 50 basis points below the beginning of May and out to 10-years sub-1% yields have taken away a fair amount of discretionary flows where management fees match or exceed available rates,” Olsan said. “During the late-spring selloff a range of buyers emerged when yields spiked into the 2% area (and TEYs were near 3% for a 21% corporate-rate investor).”

She said in the near-term, a surge in one- and two-year note offerings should cause “a small backup with modest opportunities, but the overall bias is curve extension to find more palatable levels.”

“Munis have underperformed other taxable indexes in the first half on an after-tax basis, making munis the cheapest asset class,” BofA said. The three- to seven-year and seven- to 12-year muni maturity indexes outperformed both the short- and long-end, as a slight bull steepening of the AAA curve year-to-date was more than offset by widened credit spreads.”

BofA said the GO index outperformed the revenue index as essential services — such as education, water and utilities — were strong, while airports, transportation, multi-family, rental and lease and healthcare were weak.

“We expect AAA rates to go nowhere, and credit spreads to narrow further in July. Issuance in July is expected to be around $32 billion. Principal redemptions are on the order of $30 billion and coupons $12 billion,” BofA said.

Munis were little changed on the MBIS benchmark and AAA scales.

Bond Buyer indexes mixed
The weekly average yield to maturity of the Bond Buyer Municipal Bond Index, which is based on 40 long-term bond prices, fell to 3.63% from 3.64% from the week before.

The Bond Buyer’s 20-bond GO Index of 20-year general obligation yields was unchanged at 2.21% from the previous week.

The Bond Buyer’s Revenue Bond Index was flat at 2.63% from the prior week.