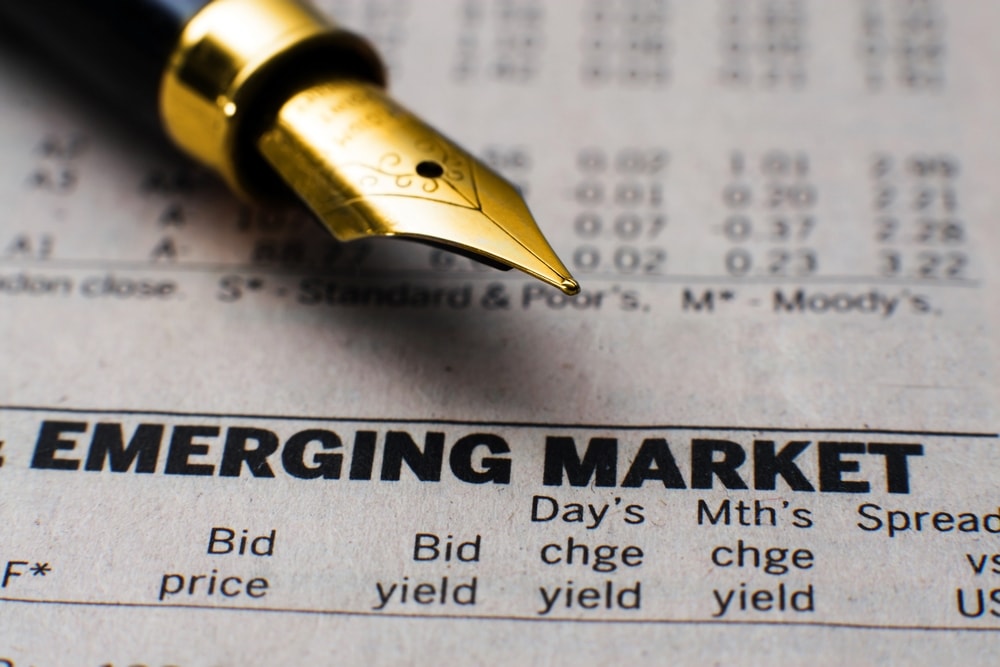 The purpose of this article is to evaluate the iShares J.P. Morgan USD Emerging Markets Bond ETF (EMB) as an investment option at its current market price. I placed a buy rating on the fund a few months ago, and EMB has moved higher, along with the broader market, since that time. While there remains some bullish momentum, I believe taking some profit here would be justified. Emerging market countries are seeing pressures from the COVID-19 pandemic, just like developed countries. This is going to likely result in higher defaults in the second half of the year. Furthermore, bond issuance remains at historically high levels. If demand does not hold up, underlying prices will fall. Finally, corporate bond in emerging markets have been attractive due to their lower use of leverage than U.S. corporates. With economic growth slowing, this disparity may not last.

First, a little about EMB. The fund has a primary objective “to track the investment results of an index composed of U.S. dollar-denominated, emerging market bonds”. Currently, the fund trades at $108.66/share and yields 4.49% annually. I reviewed EMB a little over two months ago, when I felt the time was ripe to buy. In hindsight, this was a good call, as EMB has seen a return of almost 12%, actually outpacing U.S. equities, as seen below: 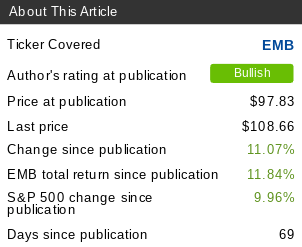 Given the sharp gain EMB has seen in a fairly short time period, I wanted to take another look at the fund to see if I should change my outlook from here. After review, I believe EMB remains a decent choice as a U.S. equity hedge, but see much less upside potential given its recent rise. Therefore, I believe a “neutral” rating is most appropriate now, and I will explain why below.

EM Bonds Are Struggling This Year

My first point takes a look at how emerging market bonds have been faring in 2020, which has been a volatile year so far. While I noted above that EMB has delivered an impressive short term gain, it is important to consider when I recommended the fund. This was back in mid-April, when the market was just beginning to recover. I felt adding risk at that time made sense, and the trade worked well. However, EMB had been struggling going in to Q2, which is why it looked attractive compared to alternatives. With this in mind, I thought it wise to highlight how emerging market bonds have performed over the past six months, so investors are not blinded by the double-digit short term gain.

The reason for wanting to highlight year-to-date performance is because emerging market bonds are actually registering a negative return through the middle of June, as shown below:

My takeaway here is that it may be smart to be a bit prudent now. EMB’s recent return certainly shows this investment play has momentum, but that has not stopped its underlying sector from registering a negative return so far this year. While emerging market bonds do offer a bit of a hedge against U.S. equities, we can see the chart above that better hedges may exist. Therefore, I see EMB as a way to capture some short term alpha, but not necessarily the best way to hedge against equities over longer time periods. This makes me cautious on the fund going forward from here.

My second point touches on supply, which has been rising steadily in 2020. Similar to the U.S., bond issuance around the world has been soaring, as interest rates globally are stuck near historic lows. While EMB specifically focuses on dollar-denominated bonds, which is just a sub-sector of the larger emerging market bond market, this is also an area that has seen a historically high level of supply. To illustrate, consider the graphic below, which shows the sector is on track for the highest level of issuance in over a decade:

As you can see, supply is quite high, but the good news is demand has been robust as well, supporting the underlying prices. My concern now is that supply does not seem to be showing any sign of slowing, and it is unclear if investors are going to continue banking on this sector. In fairness, this sector has been popular so far in 2020, as I noted short term returns have been quite strong.

However, this reality could encourage some investors (like myself) to hit the pause button on allocating further to this sector. While I do not know how the market is going to react in the second half of the year, if demand does wane while supply stays high, that will undoubtedly force bond prices lower. The end result could be pressure on the total return offered by funds like EMB, which provides further justification for my lowered outlook at the moment.

My next point has a bit more positive slant, which I feel is necessary to point out as I am not “bearish” on this fund. While I am concerned about the current risk-reward proposition, I am not forecasting major downside risk. There have been legitimate reasons for EMB’s recent rally, and there is absolutely a case to be made that further gains could continue through the summer.

One bullish sign is that corporate bonds in emerging market countries are actually less leveraged than their U.S. counterparts. With U.S. corporate balance sheets exploding, this is probably not wildly surprising, and it is actually just a continuation of a trend that has been going on for years. However, it is especially relevant now, because the spread between how leveraged the two sub-sectors are has reached a level not seen in a decade:

My takeaway here is for investors considering corporate and government bonds, we have to consider the risk profile of each sub-sector relative to the other. While emerging market countries have their own unique set of risks, and are likely more prone to default than U.S. corporates, the rising debt levels of U.S. corporate balance sheets has pressured that thesis.

The point here is investors who may consider reducing exposure to EMB in favor of a safer haven, may not necessarily see that safer haven in the U.S. corporate space, especially once the comparatively lower yields offered by U.S. corporates are considered. Broadly speaking, less leverage among emerging market issuers is a key reason why funds like EMB actually hold a fairly large amount of investment grade bonds, despite the consensus that emerging markets are a riskier asset class, as shown below:

The point to emphasize here is while I see risks on the horizon for EMB, the outlook is not entirely bleak. For investors with a longer term view, it could make sense to ride the wave for now.

Despite some positive tailwinds I noted above, my final point concerns another headwind for EMB. While I do see an argument for holding/buying the fund, there are more headwinds than tailwinds at this point, in my view. One of those is rising defaults among emerging market issuers. According to Moody’s, one of the largest credit ratings agencies in the world, defaults among emerging market issuers will rise in 2020, which is a view I would share. The primary driver behind this outlook is the expectation for negative growth across many key countries in this demographic. The COVID-19 pandemic has hit the globe hard, and emerging market countries that rely on commodity exports and tourism are going to see major fiscal challenges. The projections from Moody’s indicate significant economic contractions, as shown below:

The chart clearly shows growth expectations have been revised downward since last year in multiple countries. This is especially relevant to EMB because all those countries are represented in the fund’s assets, six of which are top holdings in terms of percentage weighting, as shown below: 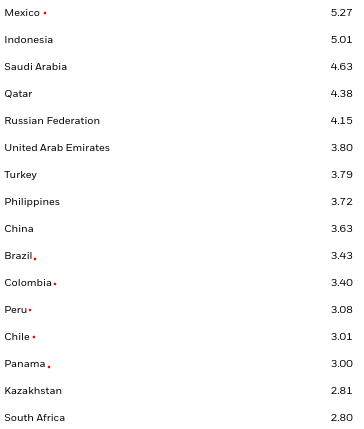 EMB has delivered some recent alpha, but now I see too many headwinds on the horizon to continue to recommend the fund. Bond issuance has soared in emerging market territories, and defaults are expected to increase with lower economic growth forecasted in 2020. While I may look to get back in to the fund at a later date, for now my outlook is cautious. Therefore, I believe a “neutral” rating is most appropriate, and believe investors should carefully consider their risk tolerance before starting new positions at this time.