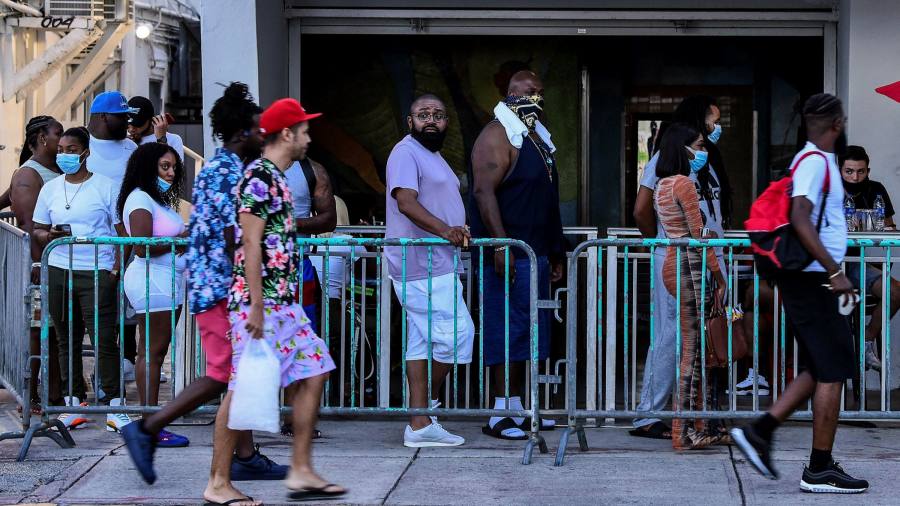 The number of new daily coronavirus cases hit records in several US states on Saturday, as officials started closing venues they had recently reopened and workers demanded new safety protections.

Florida’s cases increased by 9,636 to 132,545, the state’s health department said Saturday. The state, the third-largest in the US, reported 8,942 new cases on Friday. South Carolina and Nevada also reported record numbers of new Covid-19 cases on Saturday.

More than a dozen states in the south and west have experienced a new wave of coronavirus cases, raising the prospect that many of the regions that reopened their economies will have to reverse the measures.

Texas recorded 5,707 new cases on Friday, the fourth straight day of more than 5,000 infections. Arizona, another western state that has seen a sharp increase, had 3,428 new cases, near a new record. California recorded 4,890 and San Francisco’s mayor said the city would delay reopening measures scheduled for Monday.

Anthony Fauci, the infectious diseases expert helping to lead the US pandemic fight, said on Friday that some states might have to return to full “shelter-in-place” policies, but suggested they should first start with less severe restrictions such as limiting crowds and requiring masks.

As the US recorded its largest one-day increase in coronavirus cases since the pandemic began on Friday, fears that the country’s economic rebound could be shortlived caused the benchmark S&P 500 to fall 2.4 per cent for the day.

Florida’s new Covid-19 cases are a setback for its economy, which had been recovering from lockdowns ordered earlier this year. People poured into Florida’s vacation rental homes in May, bringing needed tourism revenue into the state.

But on Friday, Florida governor Ron DeSantis prohibited alcohol consumption in bars, effectively ordering them to close just weeks after many had reopened. Miami said its beaches would be closed over the July 4 independence day holiday.

More positive Covid-19 test results among young adults and rising hospitalisation forced the decision to close beaches, Miami-Dade County mayor Carlos Gimenez said. “If people are not going to be responsible and protect themselves and others from this pandemic, then the government is forced to step in and restore common sense to save lives.”

The decision to close bars on Friday confused some local police officers who started closing restaurants that did not need to be shut, said Carol Dover, head of the Florida Restaurant and Lodging Association.

After the governor’s announcement, “there just was a lot of confusion,” Ms Dover said on Saturday.

In Texas, governor Greg Abbott, also ordered all bars to close and limited public gatherings to fewer than 100 people.

Mr Abbott’s executive order, which requires restaurants to cut their indoor dining to half capacity, was the second attempt in as many days to snuff out a sudden jump in cases in Texas.

“If I could go back and redo anything, it probably would have been to slow down the opening of bars,” Mr Abbott told a Texas news station on Friday. “A bar setting, in reality, just doesn’t work with a pandemic.”