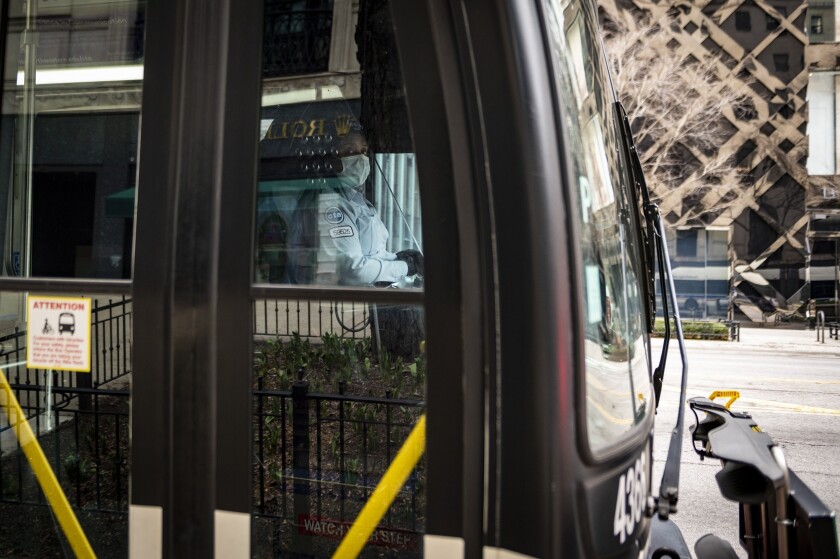 The Illinois Regional Transportation Authority plans to raise its short-term borrowing to help manage liquidity as the agency awaits federal help that should offset an expected $958 million blow to tax and farebox revenues caused by the COVID-19 pandemic.

“We were originally going to do $150 million, but given the COVID situation we decided to add another $100 million” to “provide that buffer,” RTA Chief Financial Officer Bea Reyna-Hickey said at the agency’s first virtual, livestreamed board meeting Thursday.

The RTA will send an advance payment of $35 million to its service boards to help them manage cash flow needs until they receive federal aid.

The estimated hit includes a 50% reduction in farebox revenue — a loss of $500 million — and an additional cut in its share of sale tax revenues, but the numbers could range higher, depending on the “depth and duration and degree of recovery,” said RTA Executive Director Leanne Redden.

The good news for the agency is the economic toll so far can be covered by the $1.4 billion it expects to receive from the $25 billion allocation for transit agencies in the federal Coronvirus Aid, Relief, and Economic Security Act, enacted March 27.

The horizon remains more worrisome as no one can nsay how long ridership levels will lag or how deep a hit its share of sales taxes will take. And with the state warning of its own $6 billion to $7 billion hole in the fiscal year that begins July 1, transit subsidies are at risk. Overall, the service boards saw a $56 million cut in state transit funding in 2019 and $46 million in fiscal 2020.

Sales taxes account for 41.1% of operating revenue, while fares and other system-generated revenues account for 37.7%. The RTA is the parent to the Chicago Transit Authority, Metra commuter rail, and Pace suburban bus service.

Ridership has plummeted by 67% to 97%, depending on the service board. Gov. J.B. Pritzker enacted a stay-at-home order on March 21. It initially ran to April 7, but it was extended it through the month. The CTA operates the second largest public transit system nationally while Metra runs commuter trains linking suburbs with Chicago.

The timing of capital funding allocated in the state’s multiyear $45 billion infrastructure program approved last year is also unclear as the program relies on higher gas taxes and other revenue that is dwindling amid the economic shutdown.

“We do not yet know the full financial impact and what it will do to our region’s finances,” Redden told the board, warning that draws on the relief will have to be measured as the dwindling revenue could continue into 2021.

“While new state capital funding is a positive for the authority, the state remains vulnerable to continued fiscal stress, which could result in future operating revenue reductions to the authority,” Fitch Ratings wrote in a December report upgrading the RTA. “These are unlikely to reach the point of materially diminishing resilience; nevertheless, severe revenue reductions beyond Fitch’s expectations could weaken credit quality.”

The RTA’s new projections show a 50% decline in revenues this quarter with mixed results for the remainder of the year: a temporary pickup over the summer and then further declines based on projections of a second surge in COVID-19 cases later in the year.

The CTA revenue hit from the virus is estimated at $551.2 million while it’s in line to receive $817.5 million under CARES. Metra’s loss was pegged at $301.4 million with $479.2 million expected from CARES and Pace’s loss is $71.2 million while it will receive an estimated $112.8 million. The RTA projects its own loss at $33.9 million while it would receive 2% of the CARES allocation, or $28.8 million. CARES marks a first for the transit agencies in that it provides operating support.

Board members signed off Thursday on $250 million of working note issuance. A portion will pay down the agency’s existing $150 million of outstanding notes and the remainder will provide cash flow.

The borrowing was planned by the agency earlier this year, and it reached out to about three dozen firms in Feburary. Five responded. JPMorgan was chosen from the five. The notes are structured as a direct placement facility with a draw down revolving feature so repayment is on an ongoing basis over a two-year period. The rate is set at the one-month London Interbank Offered Rate plus a spread of 1.5%. That’s up from the rate of one-month LIBOR plus 0.48% on the notes being paid off.

The RTA and its service boards had entered the new year on more solid footing, despite ongoing ridership declines, due to expected capital funding and stabilized state funding support. Fitch Ratings raised the RTA’s rating by a notch to AA-plus from AA on its $1.7 billion of outstanding general obligation bonds and cash flow notes in December and assigned a stable outlook.

The state’s new capital budget enacted in mid-2019 provides $2.6 billion for public transit projects and projects $227 million of new annual revenue for five years. The RTA is operating on $2.1 billion capital and $3.1 billion operating budgets. The RTA estimates $30 billion of needs over the next decade.