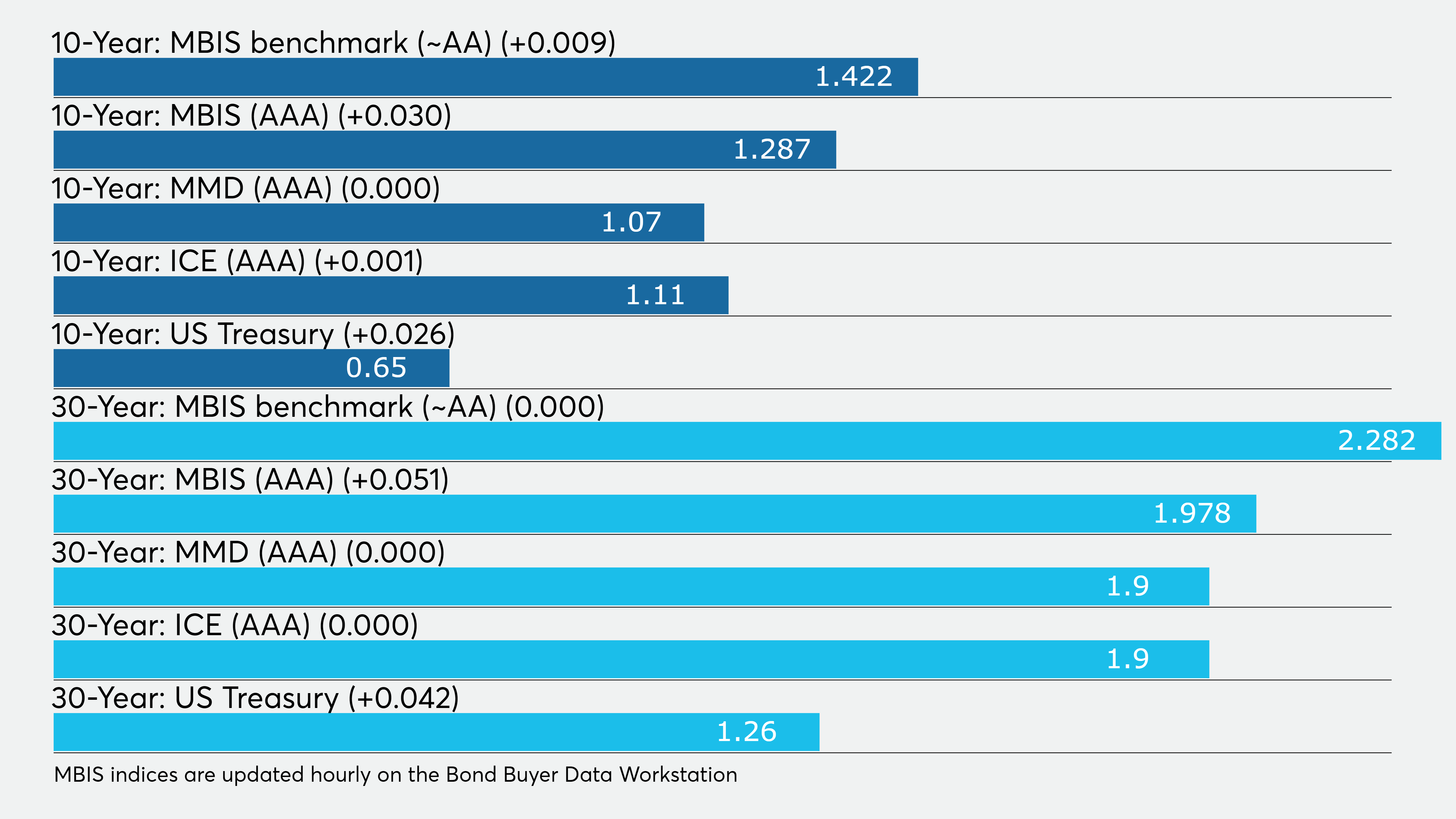 The municipal market was mostly quiet Friday as participants came off a week of a strong rally, an awakened new-issue market and the first fund inflows since February as they cautiously await another week with more deals on tap and continued questions of support out of Washington.

Triple A benchmarks showed slight weakness with most off a basis point or two.

While many new-issues are still on the day-to-day calendar for next week, more are being slated to price on specific days, signaling that dealers and issuers are ready to again test the primary.

”The market feels heavy and a bit ahead of itself, although the short end is cheap,” said Rick Marrone, senior portfolio manager at Washington Crossing Advisors. “Muni mutual funds saw inflows for the first time in five weeks, which is good to see, although I’m not sure that is representative of overall demand, which is less than robust.”

He said new-issue supply, limited as it has been, has been accepted by the market, but that could be tested whenever we get back to normal.

Friday’s trading was somewhat busy on the heels of the largest deal to price in the supply-starved municipal market since the start of the COVID-19 pandemic.

A day after the upsized, $1.4 billion California general obligation bond issue was repriced and oversubscribed four times, the overall secondary market activity did see an uptick for a Friday.

In other trends, Pietronico said he is paying keen attention to sector value and forecasting for future value.

“Credit bifurcation is alive and well in the municipal market as some sectors, such as hospital debt, continue to see spread widening over weakening revenue trends,” he said.

“Our sense is that once the economy moves forward again some excellent opportunities are available for sophisticated investors,” he said.

Sales tax-backed bonds are one sector he is watching closely for value.

The bonds widened “fairly dramatically once the economy shut down,” and Pietronico says “a bounceback in the economy should bode well for these bonds later in the year.”

Although the California deal saw spreads wider by 30 to 50 basis points to the Refinitive/MMD benchmark scale compared to a month ago, the bonds still represented value, according to Karel Cintroen, head of municipal research at investment advisor Conning.

“They are still attractive levels,” he said.

The bonds are especially attractive for retail investors in high-tax states like California, following the Tax Cut and Jobs Act and the $10,000 State and Local Tax (SALT) deduction cap, according to Citroen.

“Fundamentally, California has used its strong economic recovery to build up reserves, which it will now need to offset an expected decline in income and sales tax collections,” he said. “The success of the sale of this deal will also be indicative of the usefulness of the Municipal Liquidity Fund (MLF) the federal government has created.”

“We expect high-credit quality names, like California, to still be able to access the capital markets efficiently and, as such, to have no real use for the MLF,” Citroen added.

Meanwhile, other participants joined in on the general theme being expressed that the MLF isn’t going to be enough for the municipal market.

“There was certainly some market disappointment from the announcement of the Fed’s Municipal Liquidity Facility, meaning the market was expecting the Fed to announce that it was going to be buying medium and long term municipals in the primary and secondary market,” said Tom Kozlik, head of municipal strategy and credit at Hilltop Securities. “That did not seem to carry over too strongly into this week, however as the market continued to find its footing this week and is still in the process of normalizing.”

He added that this week’s positive muni flow number was an indicator that municipal demand could be coming back but that it is too early to tell how sustained the demand could be.

“The total calendar looks like it is only about $4 billion, so not as close to the $9 billion to $11 billion we were seeing before the COVID-19 pandemic but, market sentiment seems to be normalizing and demand for this week’s California issue was a constructive sign,” he said. “Now we are only seeing about $4 billion as day-to-day, some fell off the day-to-day calendar and the easier deals are more likely to price.”

Primary market
The calendar for next week features 12 deals $100 million or larger, many on the day-to-day calendar. 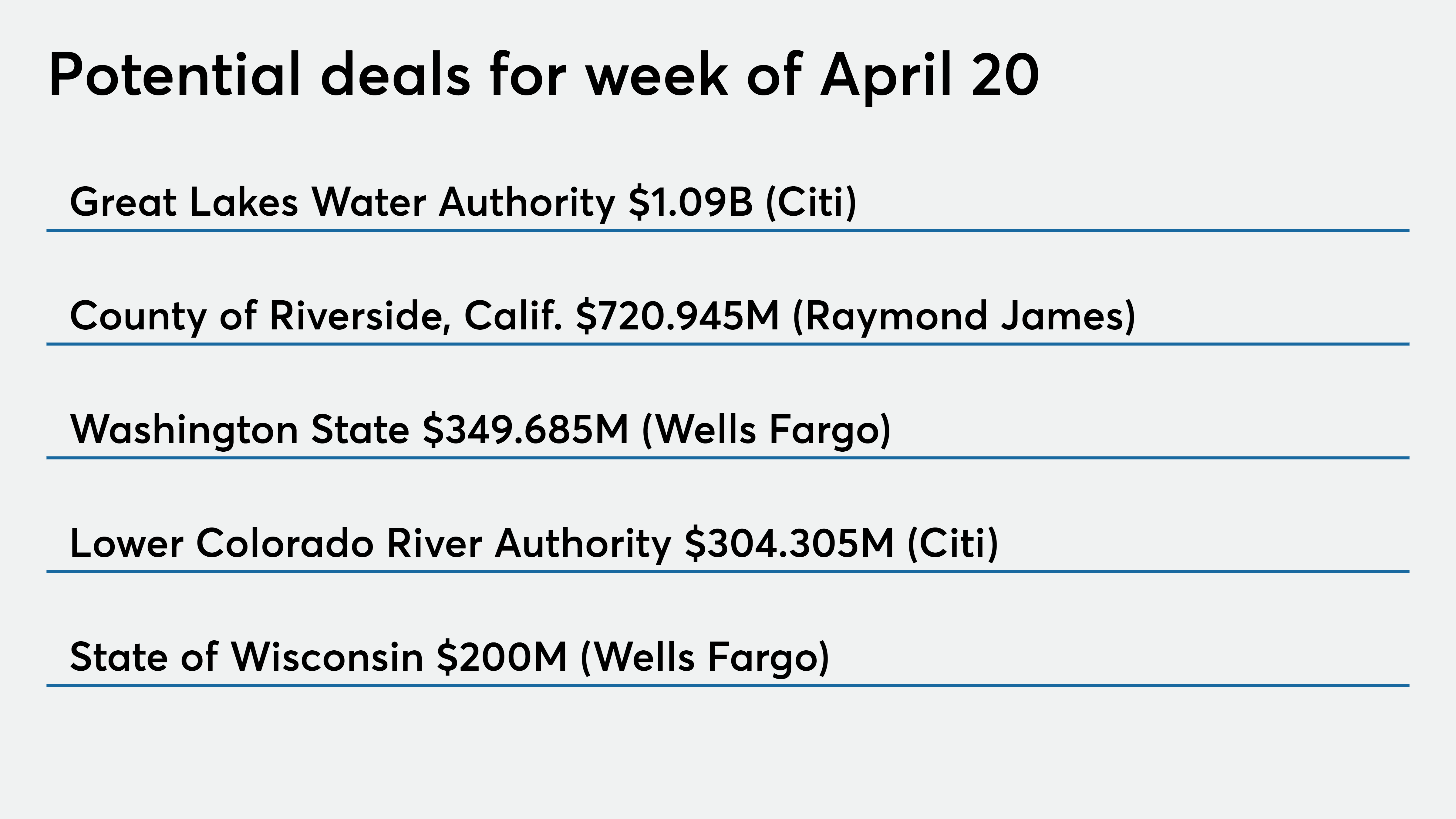 Raymond James is scheduled to price the County of Riverside, Calif.’s (A2/AA/ / ) $720.945 million of pension obligation refunding bonds on Tuesday.

In the competitive space, the Dublin Unified School District, California is expected to sell $123 million of revenue bonds at 12:30 p.m. on Wednesday.

Katy, Texas ISD has $177 million on tap for Tuesday.

NY Power Authority announces potential $1.1B sale
The Power Authority of the State of New York (Aa1/AA/AA/ ) is considering a potential issuance of approximately $1 billion of fixed rate tax-exempt revenue bonds and $110 million of fixed rate federally taxable revenue bonds. Goldman Sachs will run the books on the transaction will is expected to price as early as the week of April 27, although the size, timing, and structure of the potential transaction is subject to market conditions.

On Refinitiv Municipal Market Data’s AAA benchmark scale, the yield on both the 10-year muni and 30-year were unchanged at 1.07% and 1.90%, respectively.

Stocks were positive as Treasury yields were mixed.

Lipper reports first inflow in six weeks
For the sixth week in a row, investors put cash into the municipal market for the first time since the week of Feb. 26. 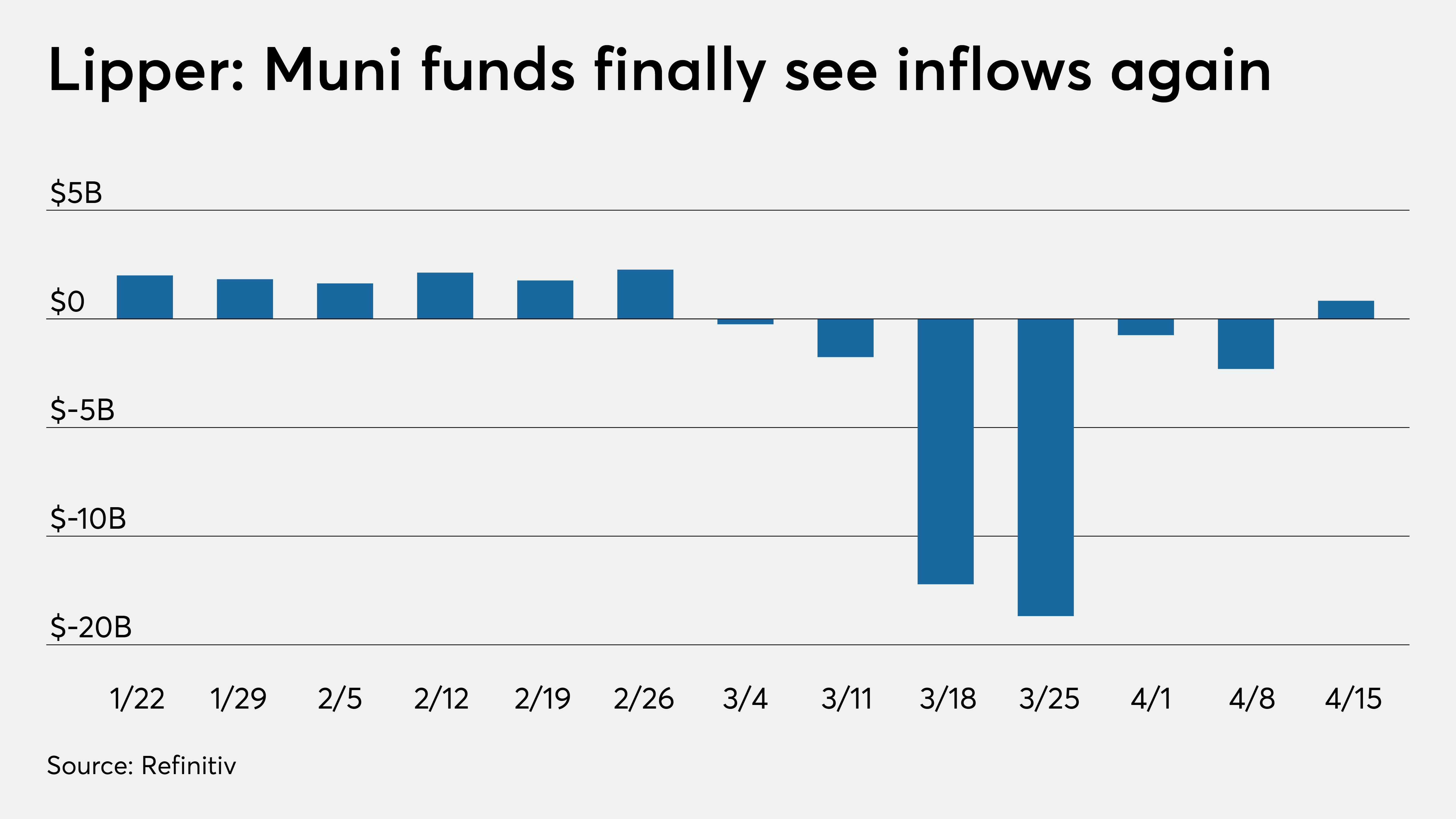 In the week ended April 15, weekly reporting tax-exempt mutual funds gained $833.388 million of outflows, after outflows of $2.306 billion in the previous week, according to data released by Refinitiv Lipper late on Thursday.

The four-week moving average was negative yet again at $3.975 billion, after being in the red at $7.237 billion in the previous week.