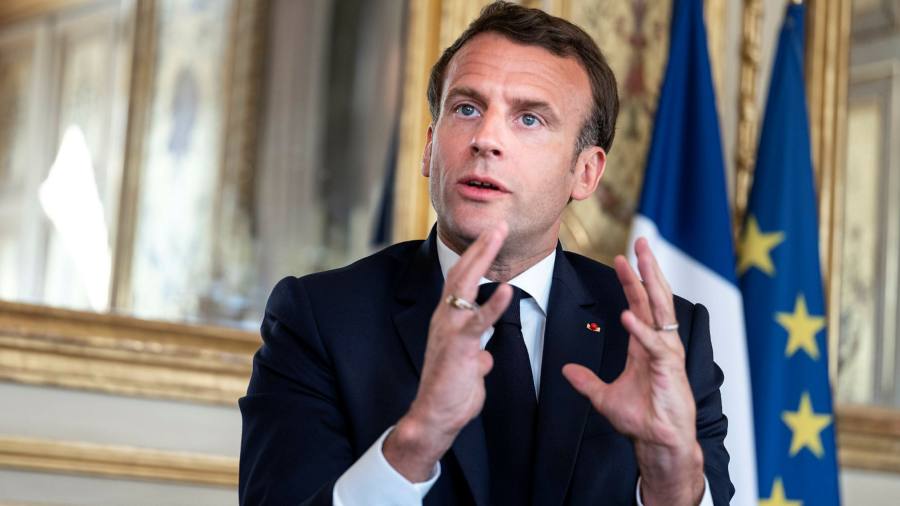 Emmanuel Macron has warned of the collapse of the EU as a “political project” unless it supports stricken economies such as Italy and helps them recover from the coronavirus pandemic.

Speaking to the FT from the Elysée Palace, the French president said there was “no choice” but to set up a fund that “could issue common debt with a common guarantee” to finance member states according to their needs rather than the size of their economies. This is an idea that Germany and the Netherlands have opposed.

The EU faced a “moment of truth” in deciding whether it was more than just a single economic market, with the lack of solidarity during the pandemic likely to fuel populist anger in southern Europe, Mr Macron said.

“If we can’t do this today, I tell you the populists will win — today, tomorrow, the day after, in Italy, in Spain, perhaps in France and elsewhere,” he said.

“I believe [the EU] is a political project. If it’s a political project, the human factor is the priority and there are notions of solidarity that come into play . . . the economy follows on from that, and let’s not forget that economics is a moral science.”

France is pushing for the creation of a joint fund or EU budget allocation of about €400bn in addition to emergency assistance already offered by the European Central Bank and other EU institutions to mitigate the economic fallout of coronavirus-related lockdowns across the bloc.

While Italy, Spain and other eurozone members are backing the initiative, Germany, the Netherlands and other northern member states strongly resist mutualising debt, arguing that it would make their taxpayers liable for other countries’ borrowings. EU leaders are to hold a video conference next Thursday to discuss the plan and other emergency tools.

Asked if failure to agree on such a fund would risk triggering the collapse of the eurozone, Mr Macron replied: “Yes, we must be clear — and also of the European idea.”

“You cannot have a single market where some are sacrificed,” he added. “It is no longer possible . . . to have financing that is not mutualised for the spending we are undertaking in the battle against Covid-19 and that we will have for the economic recovery.”

Investors have sold Italian government bonds and those of Greece, Spain and Portugal this week because they worry about their ability to sustain mounting public debt. This has resulted in widening yields between Italian treasury bonds and the safer German bonds, in a reminder of the existential threat the single currency faced in the depths of the sovereign debt crisis of 2010-12.

Mr Macron argued that most EU members had already broken the spirit of the rules enshrined in European treaties to deal with the economic consequences of the coronavirus pandemic. Many were abandoning restrictions on state aid — which, he noted, Germany could finance at lower rates of interest than Greece or Italy — to save jobs.

“We are going to nationalise the wages and the P&L [the financial accounts] of almost all our businesses,” Mr Macron said. “That’s what we’re doing. All our economies, including the most [economically] liberal are doing that. It’s against all the dogmas, but that’s the way it is.”

Mr Macron said he had “a permanent dialogue” with German chancellor Angela Merkel and Dutch prime minister Mark Rutte and thought they were “coming around” on how to finance the recovery of EU economies after the crisis.

It would be a historic mistake to say again that “the sinners must pay”, Mr Macron said. He recalled France’s “colossal, fatal error” in demanding reparations from Germany after the first world war, which triggered a populist German reaction and the disaster that followed.

“It’s the mistake that we didn’t make at the end of the second world war,” he said. “The Marshall Plan, people still talk about it today . . . we call it ‘helicopter money’ and we say, ‘we must forget the past, make a new start and look to the future’.”