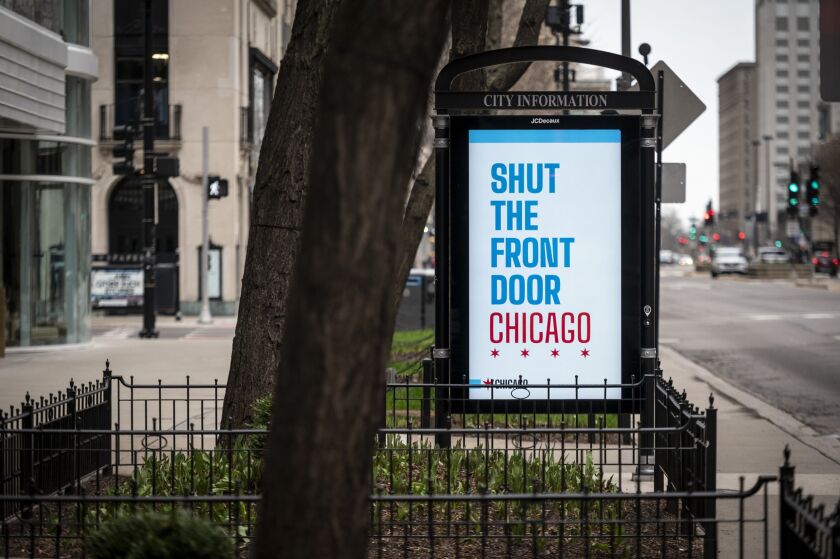 Illinois needs to close a $2.7 billion revenue gap this year and must dig its way out of an up to $7.4 billion hole in the next fiscal year due to plunging revenues blamed on the coronavirus-driven shutdown of many businesses.

“This is a public health crisis but it is accompanied by massive economic disruption that’s unprecedented in modern history,” Gov. J.B. Pritzker said during his daily briefing on the state’s COVID-19 response Wednesday.

The state is currently under a stay-at-home order with non-essential businesses and schools closed. The state has reported 24,593 cases and 948 deaths.

Pritzker, cautioning that the estimates are preliminary and fluid given that the pandemic’s economic toll remains murky, laid out revised revenue estimates that cut state-sourced revenues for the current fiscal year that runs through June by $2.7 billion.

The state has been holding the line on some spending, will dip into non general funds, roll over investment borrowing, and tap its constitutional authority that allows for cash flow borrowing when revenues fall short of estimates with an up to $1.2 billion borrowing next month. All combined, those measures reduce the deficit this year to $255 million.

The state now projects a $4.6 billion revenue blow in fiscal 2021. The shortfall next year grows to $6.2 billion after $1.2 billion of short-term borrowing and $400 million of investment fund rollovers are repaid. That figure further climbs to $7.4 billion if voters reject the constitutional amendment on November’s ballot to allow the state to move to a progressive income tax structure.

The state is operating on a $40.6 billion general fund this year and Pritzker proposed a $42 billion fiscal 2021 budget in February.

Pressure has been building on the administration to provide numbers on both the expense side and anticipated revenue blow. Comptroller Susana Mendoza this week launched an online portal that reports COVID-19 costs with the tally at about $170 million Monday.

Pritzker said Wednesday he has given nearly $500 million in spending authority to the Illinois Emergency Management Agency through the emergency powers granted under the gubernatorial disaster proclamation, including the $170 million spent so far.

The state expects that much of its expenses related to the pandemic will end up being covered by the direct aid allocation in the $2 trillion Coronavirus Aid, Relief and Economic Security ACT. Illinois expects to receive $2.7 billion with another $2.2 billion going to eligible local governments. The package provides a total of $9 billion for Illinois-based governments with grants also covering education, senior aid, transit, and airport expenses.

The state also expects to receive $459 million in added federal Medicaid support under a prior federal relief package so it reports that expenses should not impact the fiscal 2020 and 2021 projections.

The CARES funding won’t cover tax revenue losses and Pritzker used the announcement Wednesday to press his case for additional help in the fourth stimulus-relief package that is expected, citing the struggles of other states across the country with total deficit being estimated at $500 billion.

If additional aid is not passed, “that leaves states to face this unprecedented financial hole on their own,” Pritzker said. It’s about ensuring that states aren’t “facing down a second storm standing in the way of funding” for schools, healthcare, and other critical services.

Illinois is more poorly positioned to weather revenue losses as its rainy day fund is nearly empty, compared to many states that have built healthy reserves over the economic expansion of the last decade. The state has $137 billion of unfunded pension liabilities, roughly $8 billion of unpaid bills, and the lowest ratings of any state.

Moody’s Investors Service and S&P Global Ratings recently moved the state’s outlook to negative from stable on ratings that are at the lowest investment grade.

The grim revenue revisions came Wednesday in a detailed report from the Governor’s Office of Management and Budget.

“While the length and potential impact of the unprecedented emergency response remains unclear, economists have begun to project the likely impact on the economy, and in turn, the revenue collections that support the operations of state governments,” the report said.

Statutory borrowing investment agreements currently totaling $400 million between the comptroller and treasurer’s office that were to be repaid from the general fund in March and April will be pushed off into July and an additional $323 million of allowed interfund borrowing from non-general fund accounts will help close the 2020 shortfall. The $323 million must be repaid within 48 months.

The state will take advantage of the Short-Term Borrowing Act that allows for cash flow issuance — which must be repaid in the next fiscal year — when revenue forecasts fall short of projections. The borrowing for up to $1.2 billion will cover the $1 billion reduction in income tax revenue expected in April because the filing deadline was moved to July to match the IRS.

The revised forecast relies on data from IHS Markit, GOMB, and state Department of Revenue.

State sourced revenues were revised downward by $2.7 billion to $36.9 billion for fiscal 2020.

Individual income taxes are expected to fall by 6.9% or $1.3 billion over February estimates. Corporate income taxes were lowered by 12% or $299 million.

“This reflects not only the effects of business closures, social-distancing behavior, and event cancellations, but also the immediate effects of lost income and wealth caused by pandemic-related disruptions in labor and financial markets,” the report warned.

Proceeds from wagering, including lottery sales and casino gaming, are projected to decline based on diminished economic activity with the hit estimated at $207 million. As some of that revenue goes into the capital fund to repay general obligation debt the shortfall will require an additional $120 million transfer from the general fund to pay debt service.

With the federal funds, cuts, transfers, and borrowing the state expects to end fiscal 2020 with a $255 gap.

The state cut its individual income tax projections by 8.85% or $1.8 billion.

“This forecast assumes large declines in economic activity during the second and third quarters of calendar year 2020, followed by a very gradual recovery that does not conclude until after fiscal year 2021,” the report says.

“Although economic growth is currently forecasted to return in fiscal year 2021, corporate income tax receipts will remain depressed as substantial losses in calendar year 2020 are used to offset taxable income in the following year,” the report said.

The fiscal year 2021 federal revenue estimates could change depending on future Medicaid matching funds or other aid.

When asked Wednesday whether the graduated tax should remain on the ballot, Pritzker said: “We may need it now more than ever….this isn’t just about one year, it’s about fixing the structural deficit that exists for the state,” Pritzker said. “This crisis, however, takes us off course for a little while.”

The proposed structure would raise tax rates on only top earners but critics warns that it opens the door to middle and lower income hikes down the line.