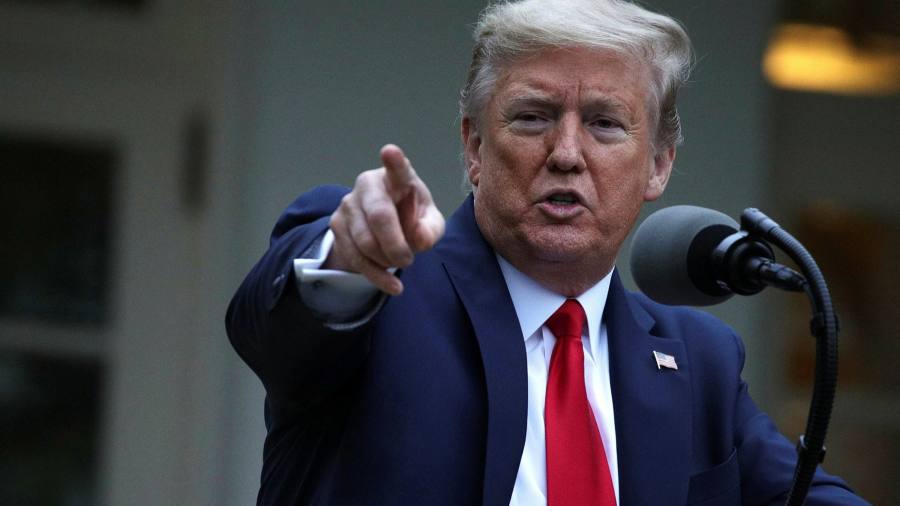 The US will halt funding to the World Health Organization after Donald Trump accused the global health body of “severely mismanaging” the coronavirus pandemic.

The president said hundreds of millions of dollars in US funding would be suspended while a review was conducted to assess the WHO’s “role in severely mismanaging and covering up the spread of the coronavirus”.

“American taxpayers provide between $400m and $500m per year to the WHO, in contrast China contributes roughly $40m a year, even less,” Mr Trump said on Tuesday. “As the organisation’s leading sponsor, the United States has a duty to insist on full accountability.”

The US, where almost 26,000 people have died from Covid-19, is the largest single contributor to the WHO. It gives the body about $500m each year, with $116m mandated by the UN and about another $400m in voluntary payments.

“With the outbreak of Covid-19 pandemic, we have deep concerns whether America’s generosity has been put to the best use possible,” Mr Trump said.

“The reality is that the WHO failed to adequately obtain, vet and share information in a timely and transparent fashion.”

Democrats criticised Mr Trump’s decision, accusing the president of trying to distract voters from his own handling of Covid-19, having initially said the virus would disappear “like a miracle”.

“The coronavirus cannot just be defeated here in the United States, it has to be defeated in every conceivable location throughout the world,” she said.

“If we don’t eradicate it everywhere, we are still at risk here, which is why the president should not be taking valuable tools away from international health experts who are fighting a battle he largely ignored and downplayed.”

But it is not just Mr Trump who has been critical of the WHO. Australia has also expressed concerns about the WHO’s handling of the pandemic, calling for greater transparency from the health body on the causes of the coronavirus outbreak.

Scott Morrison, Australia’s prime minister, criticised the WHO’s apparent refusal to advise China not to reopen its “wet markets”, which are thought to have been the source of the outbreak in Wuhan.

“On the issue of the wet markets, I just find it baffling. I just don’t get it,” Mr Morrison said.

Later that month, the WHO described the virus as a global emergency, yet recommended countries keep their borders open. That same day, Mr Trump banned most travel from China to the US.

“One of the most dangerous and costly decisions from the WHO was its disastrous decision to oppose travel restrictions from China and other nations,” Mr Trump said. “They were very much opposed to what we did.”

Mr Trump’s announcement will find favour with Republicans on Capitol Hill, who have repeatedly censured the WHO and questioned its links with China.

Jim Risch, the Republican senator from Idaho who chairs the Senate foreign relations committee, said last week that the health body had become a “political puppet of the Chinese government” and called for an independent investigation into the organisation.

“The WHO has failed not only the American people, it has failed the world with its flagrant mishandling of the response to Covid-19,” Mr Risch said.

Separately on Tuesday, Republican senators Rick Scott, Ron Johnson, Martha McSally, Kevin Cramer, Steve Daines, Todd Young and Joni Ernst sent a letter to the WHO requesting more information on its “role in helping the Chinese Communist party cover up information regarding the threat of the coronavirus”.

The Democratic National Committee’s Daniel Wessel accused the president of putting “global health further at risk to try to deflect blame from his own failures”.

“It was Trump who ignored warnings for months while he praised China’s ‘transparency’. It is Trump who cut CDC [Centers for Disease Control and Prevention] staff in China who could have shared information about the pandemic. It is Trump’s incompetence that continues to make this crisis worse than it had to be,” he added.

Ronald Waldman, a public health professor at George Washington University who previously worked at the WHO, said the body was of “vital importance” to most countries and “should not be held responsible for the course of the pandemic in the US”.

“The US citizenry may not immediately suffer from a decision to withdraw funding from the organisation, but many people around the world who depend on WHO programmes to develop and guide policies that protect their health and the health of their children will,” he added.