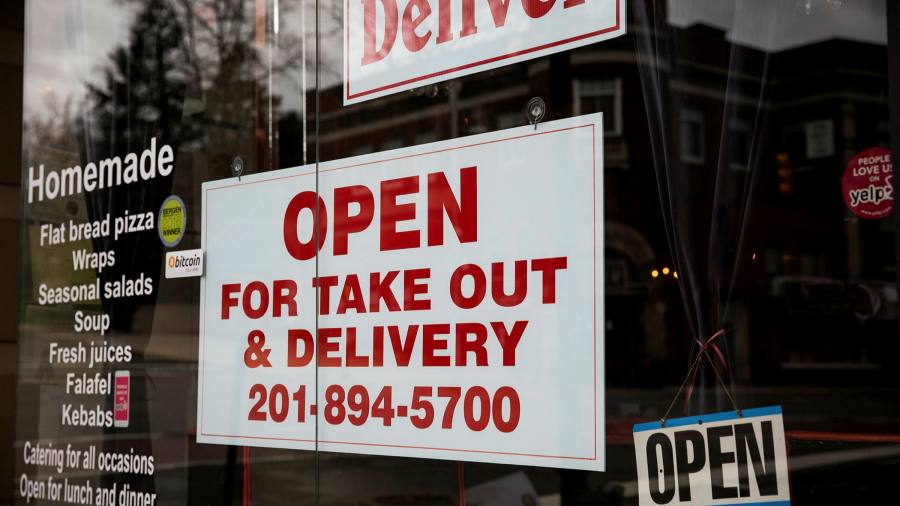 Data from all corners of the US economy published on Wednesday revealed the scale of the collapse in consumer demand, industrial activity and confidence, suggesting the hit from coronavirus lockdowns has been deeper even than feared.

Two measures in particular were historically bad: US industrial production showed the biggest monthly decline since the end of the second world war, while retail sales dropped by the most since the data started being collected in 1992.

“The message is that it will be a brutal spring quarter for the economy,” said Joshua Shapiro, an economist at the consulting firm MFR. “While there will be a bounce in growth rates as the economy is gradually reopened, returning to the levels of activity that prevailed pre-crisis is going to take a long time, and indeed probably will be measured in years for the most affected sectors.”

Industrial production, a broad gauge of output from factories, mines and utilities, fell 5.4 per cent in March from the previous month, according to the Federal Reserve, its worst performance since 1946.

Headline retail sales, a measure of sales in shops and restaurants, fell 8.7 per cent, according to the Commerce Department, erasing four years of growth.

Both measures came in worse than economists had expected.

The retail sales data in particular showed how the pandemic has curbed and reshaped Americans’ spending habits since mid-March, when social distancing measures were imposed and Americans began to lose their jobs in record numbers.

Purchases at grocery stores surged by 27 per cent as consumers filled up their pantries, but there was a 27 per cent drop at bars and restaurants, which in many cases had to shut their doors. Sales at petrol stations sank by 17 per cent as people stayed home.

Clothing sales were cut in half, the worst of any category. Car and furniture sales each dropped by a quarter

The drop in retail sales is “just the beginning of the consumer pullback,” said Lydia Boussour, senior US economist at Oxford Economics.

“Plummeting consumer confidence, collapsing employment, and lockdown restrictions have compounded into an extraordinary and multi-faceted shock to consumer spending and brought the economy’s main engine to a sudden halt.”

With many factories suspending operations by the middle of last month, manufacturing output tumbled 6.3 per cent, the biggest such drop since February 1946. The largest decline was in motor vehicles and parts makers, down 28 per cent, while production of business equipment — in more normal times seen as a proxy for corporate confidence — fell 8.6 per cent.

“After the war, manufacturers retooled their lines to meet the needs of the postwar consumer economy which produced extremely wide swings in industrial production,” Thomas Simons, economist at Jefferies. “It looks as though 2020 is going to be just as volatile”.

The message is that it will be a brutal spring quarter for the economy.

While the data in March hit decades-long lows, April is expected to look far worse as lockdown effects have been more sweeping. Investors received a preview of what is to come on Wednesday from regional manufacturing and homebuilder confidence surveys.

The general business conditions index of the Empire State manufacturing survey — a measure of New York industry — fell to minus 78.2 this month, far worse than the previous record low of minus 34.3 reached in February 2009 during the world financial crisis. Its data goes back to 2001.

The report showed new orders, shipments, employment levels and the average work week all contracted at a record pace.

Meanwhile, the National Association of Home Builders’ housing market sentiment index posted its biggest ever monthly decline, falling from 72 in March to 30 in April. A reading below 50 indicates builder confidence is in negative territory. The NAHB has been running the survey since 1985; the new data is at its lowest level since June 2012.

The slew of bad news weighed on equity markets, which had been buoyant the previous day and are up almost one-quarter from lows set last month. By lunchtime in New York, the S&P 500 index was down more than 2 per cent. US Treasuries rallied, sending the yield on the 10-year note, a safe haven for worried investors, down 0.1 percentage points to 0.65 per cent.

“No one is shopping at the mall and no one is working on the factory floor,” said Chris Rupkey, chief financial economist at MUFG Union Bank. “The magnitude of these March declines in production and retail sales tells you the market’s optimism that the worst was over for the economy was misplaced.”