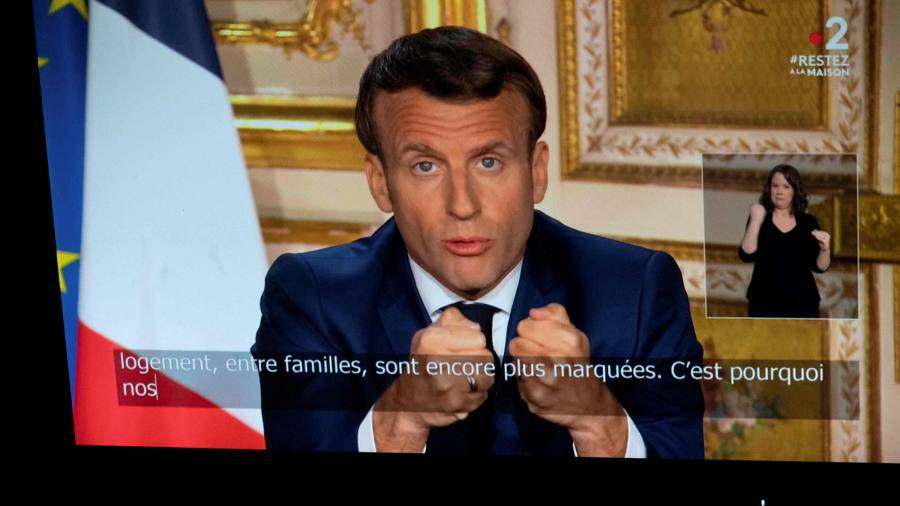 Leaders of Europe’s hardest-hit countries have vowed to keep lockdown orders in place but began outlining plans to reopen their economies amid signs they had overcome the worst of the coronavirus outbreak.

President Emmanuel Macron announced in a televised address on Monday evening that he would extend France’s national lockdown until May 11. But he said crèches and primary and secondary schools would progressively reopen after that date and vowed to be able to test all with Covid-19 symptoms by then.

Mr Macron’s signal that he was preparing to gradually lift isolation orders next month came on the same day that Spain became the first of the hardest-hit European countries to loosen its regulations, allowing workers in “non-essential” industries such as construction to return to their jobs after a two week ban.

But Madrid has warned it could tighten Spain’s month-old lockdown again if infections and deaths rise anew. Although 17,489 people have died in Spain, the 517 fatalities in the past 24 hours was well off last week’s highs of more than 900 a day.

Still, there were mixed signals over how effectively the outbreak had been contained on the continent. Italy last week extended its strict social distancing measures until May 3, and on Monday announced its death toll had risen by 566 in the past 24 hours — a disconcerting increase from the 432 fatalities reported on Sunday.

Despite Monday’s rise in fatalities in Italy — which took its tally to 20,465, second only to the US in reported coronavirus deaths — Italy, Spain and France have all in recent days shown a levelling out or declines in death rates, leading some to hope they could gradually reopen their economies in the coming weeks.

Brussels is expected to present an EU-wide blueprint for lifting restrictions next week that calls for national capitals to co-ordinate their exit, according to a draft of the plan seen by the Financial Times.

“At a minimum, member states should notify each other and the [European] Commission in due time before they lift measures and take into account their views,” the document says. “It is essential that there is a common approach and operating framework.”

The UK’s daily death rate was also off last week’s highs at 717 on Monday, but Dominic Raab, the British foreign secretary who is in charge of day-to-day decisions while Prime Minister Boris Johnson recovers from Covid-19, said national restrictions would remain in place for the foreseeable future.

“We are doing a lot of work in government to be guided by the science and the medical advice that you get and I think that, until you have got that evidence, we will be getting ahead of ourselves,” said Mr Raab.

All four hard-hit European countries have struggled with the political fallout of the persistently high death rates. In his half-hour address from the Elysée Palace in Paris, Mr Macron struck a contrite note, admitting the government had been ill-prepared for the outbreak.

“Were we prepared for this crisis? From the evidence, not enough, though we did deal with it,” he said in his fourth speech since the start of the crisis.

“The moment has revealed failures and shortcomings,” he added, referring to the lack of masks and other medical equipment — even as he held out hope a pandemic that has nearly overwhelmed hospitals in eastern France and the Paris area was beginning to stall. France has seen 14,967 deaths from Covid-19 since March 1.

Hope has been reborn but nothing is guaranteed

A rapid doubling of the number of intensive care beds to 10,000 in France and the moving of hundreds of critically ill patients by train and aircraft from the worst regions to hospitals in less affected areas, have allowed the country to treat every patient requiring emergency treatment.

Mr Macron said the current restrictions on movement — people can leave their homes only to go to work, buy essential supplies, help the vulnerable, seek treatment or take exercise nearby for an hour a day — would be neither eased nor hardened but would stay in place for a further month because they had proved their worth.

“Hope has been reborn but nothing is guaranteed,” he said. “The epidemic is not yet conquered . . . the more the rules are respected, the more lives we save.”

Although younger children would gradually be allowed to return to school after May 11, Mr Macron said universities would stay closed except for distance learning, while bars, restaurants and cinemas would stay shut. There would no big festivals at least until mid-July, he added. Borders with non-European countries would remain closed to visitors until further notice.

Mr Macron, accused in the past by his opponents of being an arrogant “president of the rich”, adopted a determined but humble tone, saying people needed to learn the lessons of the crisis. “We need to reinvent ourselves, starting with me . . . Times will again get better and we will again have happy days.”