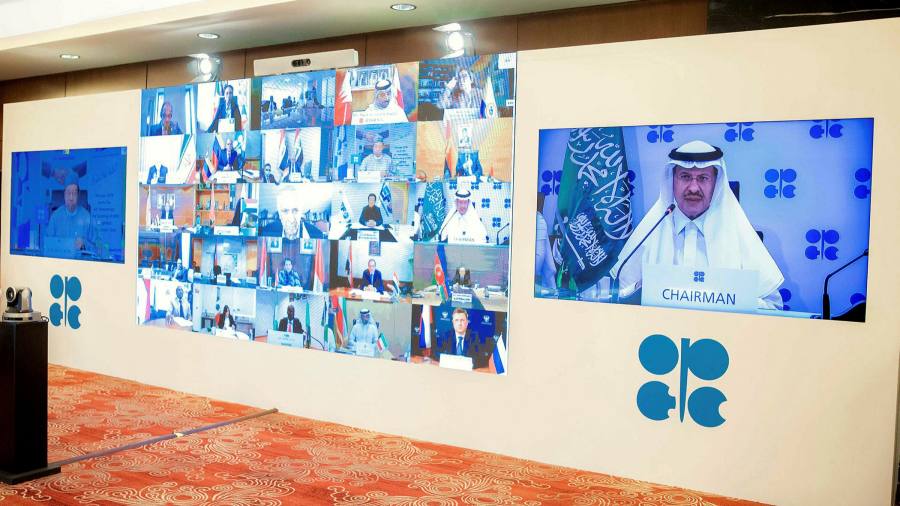 Oil prices came under pressure in early trading on Monday on doubts that a record US-backed Opec deal to cut supply would be enough to rescue a market ravaged by the coronavirus pandemic.

Opec and its allies, including Russia, on Sunday signed off on a deal to cut almost 10 per cent of global supplies, winning backing from the US and other G20 countries for additional measures to prop up a market where demand has fallen by as much as a third.

Brent crude, the international benchmark, initially rose when markets reopened after the long weekend but soon reversed its gains, trading flat near $31.50 a barrel by midday in London. US benchmark West Texas Intermediate was slightly stronger in volatile holiday-thinned trading, rising 1 per cent to $23 a barrel.

“The cuts are still not big enough to avoid a huge global stock build in the second quarter,” said analysts at Facts Global Energy, a consultancy, even as they said the size of the deal had slightly exceeded their expectations.

“Oil at sea and floating storage are expected to surge at record speed to record levels in coming weeks.”

Ahead of the deal, hammered out over the long Easter weekend, Brent crude had already recovered from an 18-year low near $20 a barrel earlier this month to more than $30 a barrel today, though prices are still less than half the level at the start of the year.

But traders doubt that the pact will be enough to boost prices much further in the short term, with measures to stop the spread of the virus shutting down large swaths of the world’s largest economies, and fears a deep recession will further cut into fuel demand.

Opec said it would cut 9.7m barrels a day in oil production in May and June, equivalent to almost 10 per cent of global supply, and continue with lower reductions until April 2022, in an effort to stabilise global energy markets.

Officials in the Saudi Arabia-led cartel added that the total measures taken could end up being even greater, affecting about a fifth of global supply, though this would include declines forced on producers outside Opec by the recent oil price collapse, like those in the battered US shale sector.

Big oil consumers from the G20 including the US, China, India, Japan and South Korea are also expected to eventually buy cheap oil for their countries’ strategic reserves to give a boost to demand, after energy ministers from the wealthy nations group held an emergency meeting with Opec on Friday.

This rare attempt at semi co-ordinated global action in the oil market has come as officials fear the long-term damage that might be done to the energy sector, which has never before faced such a sudden evaporation of demand.

Storage tanks globally are expected to max out within months, though the supply deal should buy some time, while co-ordinated efforts to scale back production are seen as preferable to forcing the shutdown of fields, which can damage reservoirs and long-term supplies.

Poorer oil-dependent countries such as Nigeria have seen their government budgets shrink as they prepare to fund their domestic response to coronavirus.

President Donald Trump emerged as an unlikely champion of the deal as the higher cost US shale industry — which has transformed America into the world’s top producer in the past decade — faces widespread bankruptcies and production declines.

Washington put pressure on Saudi Arabia to secure the deal, threatening tariffs on its oil sales and even the possible withdrawal of military aid from one of its oldest allies in the Middle East, such was the desperation for action.

But it is still unclear how large the cuts and other measures will be, with a brief price war between Saudi Arabia and Russia that broke out last month skewing the level producers are cutting from, as both countries had ramped up supply.

Saudi Arabia also indicated on Monday it would continue discounting its crude into Asia, even as it raised its official selling prices to the US, in a sign it had not completely abandoned its fight for market share.

Energy Aspects estimated the total cut from the Opec+ group, compared with the average level in the first quarter, may be closer to 7m barrels a day or about 7 per cent of pre-crisis demand. Traders say market-driven supply drops in the likes of the US are also less likely to move the needle, as they have already been largely factored in to supply and demand balances.

Analysts at Goldman Sachs said they “do not count these as voluntary cuts in our oil balance,” warning that left “voluntary cuts as still too little and too late to avoid breaching storage capacity, ensuring that low oil prices force all producers to contribute to the market rebalancing”.