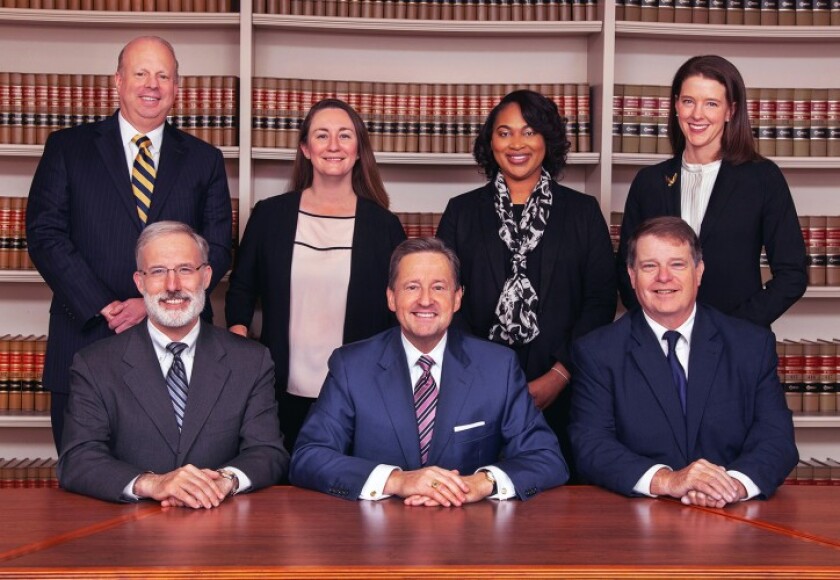 “In this post-trial Memorandum Opinion, I find that Nuveen used threats and lies in a successful attempt to damage the plaintiff in its business relationships,” Delaware Chancery Court Vice Chancellor Sam Glasscock III wrote in his 59-page opinion. “The record, taken as a whole, shows consistent, systematic efforts by Nuveen to shut down Preston Hollow’s ability to continue to do business.”

But the court concluded the relief sought by PHC — banning Nuveen from future interference — was not available and he also declined to rule on a count alleging anti-trust violations under New York State’s Donnelly Act on legal reasons. Two other counts were previously dismissed. One, for defamation, is pending before the Delaware Superior Court.

“I find the equitable relief sought by Preston Hollow is unavailable, however,” Glasscock wrote. “The plaintiff has failed to demonstrate entitlement to an injunction.”

PHC is a Delaware limited liability company formed in 2014 with $2.1 billion in assets and $1.3 billion in equity capital. Nuveen is a global asset manager, with municipal bonds forming a subset of its various asset classes with fixed income assets under management of $150 billion.

“We are pleased the court did not grant any injunction against Nuveen, and we continue to fully support John Miller and his entire team, who can continue delivering strong investment performance on behalf of our clients,” Nuveen spokeswoman Jessica Greaney said in a statement. “However, we respectfully disagree with the court’s finding that Nuveen tortiously interfered with Preston Hollow’s business. John and his team remain motivated by a desire to protect client investments while also supporting a fully transparent municipal-bond market for all participants.”

Preston Hollow said the opinion gave it the vindication it had sought and will help make its case with prospective banking and issuer clients.

“Preston Hollow Capital is gratified by the decision of the Delaware Chancery Court, which saw precisely what we saw: Nuveen’s campaign of anti-competitive, untruthful, unfair and destructive conduct in the marketplace,” PHC chairman and chief executive officer Jim Thompson said in statement.

“The court’s stern language will serve as the injunction we sought, as we are confident Nuveen will follow the court’s admonition that it would be ‘exceedingly unwise for Nuveen to mount a similar campaign of malicious behavior’ against Preston Hollow going forward,” Thompson said.

The firm will pursue monetary damages in the Superior Court where the defamation claim is pending and is deliberating on its next steps on that case and the Donnelly Act antitrust claim. PHC was represented by Morris Nichols Arsht & Tunnel and Wollmuth Maher & Deutsch LLP.

PHC had not sought monetary damages but asked the court for a preliminary and permanent injunction ordering Nuveen to cease the alleged conduct and to order Nuveen to rectify the harm already caused by withdrawing and disavowing retaliatory threats. It asked that Nuveen be directed to adopt supervisory procedures to ensure it would ban future misconduct that is alleged.

Glasscock said he could not abide by the request for permanent injunctive relief because it is usually applied to prevent an ongoing harm such as an encroachment on real property but he did give Nuveen a stern warning.

“I presume that Preston Hollow suffered irreparable harm as a result of Nuveen’s tortious behavior. Nonetheless, before receiving injunctive relief here, it must demonstrate that it faces a likelihood that Nuveen will repeat its tortious behavior … in light of this decision, it would be exceedingly unwise for Nuveen to mount a similar campaign of malicious behavior,” the opinion reads.

Glasscock concluded that because there were several legal questions over the application of the law and injunctive relief that he did not want to rule on the New York Donnelly anti-trust count because Delaware has a policy against innovating in sister-states’ laws.

The anti-trust accusation could be pursued in a new case in New York or PHC could move to the federal courts on the Sherman Act. PHC had previously said it filed in the Delaware Chancery Court because of its knowledge of corporate rules and its ability to move legal proceedings forward more quickly than the federal courts.

Some may view the opinion as nothing more than a slap on the wrist for a municipal titan like Nuveen because of the lack of injunctive relief and some have questioned whether the outcome was financially worth PHC’s effort beyond the negative headlines for Nuveen, said one municipal source following the case.

But one legal source said Glasscock’s findings on the tortious interference count and the evidence laid out in the subpoenaed recordings between Nuveen and banks and broker-dealers represent a victory that will prevent future interference and will help the defamation case. The opinion could also draw the attention of market regulators and the U.S. Justice Department of Justice.

Some broker-dealers appeared in the calls willing to bow to Nuveen’s demands while others did not. PHC previously notified the court to the fact that a “governmental entity” was interested in the recordings. Court documents showed that the PHC had contacted the unidentified entity about the litigation.

The Securities and Exchange Commission regulates banks while the U.S. Justice Department and Federal Trade Commission enforce federal antitrust rules under the Sherman Act with only Justice able to bring criminal charges. The Financial Industry Regulatory Authority is an independent, nongovernmental organization that writes and enforces the rules governing registered brokers.

Opinion
The opinion offered a bruising assessment of Nuveen’s behavior. That behavior was laid out in recorded calls between Nuveen’s head of municipals John Miller and members of his team who threatened to pull business from banks and broker dealers if they did business with the private, direct lender. PHC subpoenaed the recordings that banks and broker-dealers were required to keep of calls.

Nuveen’s influence as an investment titan and whether that power enabled it to damage its smaller rival took center stage during a July trial.

Nuveen argued all’s fair in a competitive marketplace and worked to recast what PHC called illegal tactics to damage its business as simple reminders to banks and broker-dealers of their wish to be among the first to see deals. Miller and his team accused PHC on the calls of engaging in “predatory” lending practices, charging off-market rates on deals with poor covenants that it believed damaged the market.

PHC countered that its business model offered flexibility for issuers in the high-yield sphere.

Glasscock in his opinion didn’t mince words in his take on Nuveen’s portrayal. “Their circumlocutions for falsehoods” using words such as hedge, bluff, exaggeration, role-play, scenario, overstatement, blustering, short-cutting, puff, shorthand, overblowing “in situations where more quotidian creatures would simply say ‘lie,’ might make one doubt that the latter word is in their vocabulary,” Glasscock wrote.

On whether there was intention to interfere, Nuveen argued that its intention was to oppose the 100% direct placement that it believed harmful to the market and not specifically to damage PHC.

“I found this testimony both self-serving and disingenuous. I find that the Nuveen personnel meant what they said. These communications evidence a common theme: Nuveen called broker-dealers and told them to stop doing business with Preston Hollow or face consequences — including being put ‘in the box’ and losing their business with Nuveen. This activity, which Preston Hollow aptly characterizes as a campaign, demonstrates an intent to interfere,” Glasscock wrote.

Background
Preston Hollow sued Nuveen on Feb. 28. It accused the firm and Miller and his staff of a concerted effort to damage its business through “threatening, anti-competitive and defamatory communications” to top broker-dealers and Preston Hollow’s primary lender.

Nuveen had pressed Deutsche Bank to pull its financial backing of PHC and banks and broker-dealers to shun PHC on deals they were managing or lose their tender-option and primary and secondary market trading business, according to the recorded conversations released by the court.

“I’ve got 90% of the major top bracket muni broker-dealer firms and banks to say absolutely never again and I’m working on 100%. I feel my chances are pretty good at getting there,” a Nuveen employee tells a Deutsche Bank employee during one conversation. The case dragged top tier firms into the fray including Wells Fargo, Bank of America, Goldman Sachs, JPMorgan, Morgan Stanley, Stifel, Mesirow, and RBC.

“And, again, we — legally speaking — have to be very clear. We’re not telling anyone not to do business with them. We’re just saying that if we know that you do, we cannot do business with you,” another Nuveen employee tells a Deutsche Bank employee on the transcripts.

A two-day, non-juried trial was held in July and post-trial arguments held in September. Glasscock had struggled with the difficulty of imposing an order and tracking it so he pressed the two side to settle. They tried and failed. He again urged the two sides to try again in late December signaling that his opinion would likely favor PHC and would not view Nuveen in a positive lens. They again failed and asked the judge to issue an opinion.

When PHC filed the case in late February it cracked the window open on the cutthroat competition in the high-yield municipal market. Its accusations sparked debate on the accusations of whether strong-arm tactics broke the law, broker-dealer complicity and resistance, and what constitutes pricing fairness.

PHC said it heard of Nuveen’s tactics from various banks and broker-dealers beginning in 2017 and they accelerated in the latter half of 2018 after PHC completed two direct placements, one for Howard University and the other for Roosevelt University in Chicago. PHC appealed to Nuveen to halt the disparaging comments. PHC said the demand effectively fell on deaf ears and so it sued.

The opinion notes that the parties lodged 37 depositions and submitted 832 joint exhibits.
The case originally was brought with four causes of unlawful action including tortious interference with contract and defamation. Glasscock has dismissed the tortious contract claim and the defamation charge. The defamation charge was dismissed because it requires jury consideration and Chancery Court cases are decided by a judge. That charge was transferred to the Delaware Superior Court but was stayed until the original case is resolved. PHC said it would not move forward.