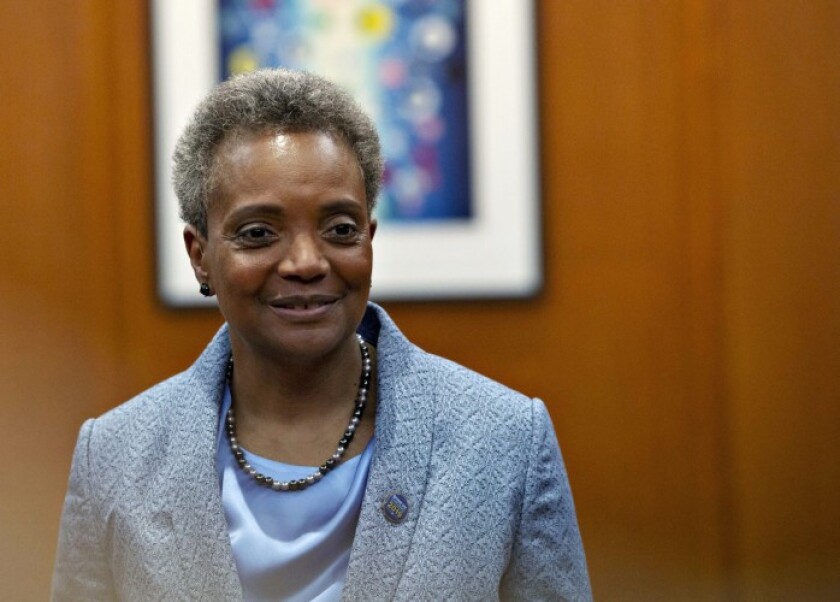 “We want to make sure we come out of this experience as strong as possible. What we don’t want to do is something that shrinks government” or undercuts “the city’s long-term financial position,” Lightfoot said. “We’ve worked really hard in the almost year I’ve been in office to make sure we are on very solid financial footing not just for now but into the future. We are not going to tap into our reserves. We are not going to” delay pension payments “we are going to meet them.”

As officials announced the federal government’s $2.2 trillion package that is expected to compensate the city for more than $500 million of COVID-19 expenses, Lightfoot stressed Thursday the city is not considering furloughs, layoffs, or service cuts.

“We believe the government has to be part of the stimulus … if we shrink and then put people on to the street we are going to exacerbate an already difficult time. We think that’s exactly the wrong strategy,” Lightfoot said.

City officials did not directly answer a question on whether pension obligation bonds are being considered beyond saying they would take any steps that avoids damages to the city’s fiscal position. City hall and market sources have told The Bond Buyer that the city is exploring the POBs idea and bankers have been asked to run numbers on various scenarios and the administration has enlisted some aldermen to join in consideration of the idea.

One source cautioned that at this point the city was exploring the idea and sizing, timing, and structuring were a long way off if the city decided to go that route and the aim would be to improve funding and not for near-term relief.

Former Mayor Rahm Emanuel pitched the idea of a $10 billion POB under a revenue bond and securitization structure but Lightfoot rejected the proposal as irresponsible. A prolonged stock market tumble could inflict severe damage on the city’s $30 billion of net pension liabilities that less than 30% funded.

Lightfoot also warned that she couldn’t predict how long the business shutdowns would last because the city will proceed cautiously based on science and data before resuming business activity. The state-ordered stay-at-home directive runs through April.

The comments were made on a conference call Lightfoot and her finance team — led by chief financial officer Jennie Huang Bennett and budget director Susie Park — held with reporters Thursday.

They laid out some preliminary figures on expenses incurred so far and compensation the city may receive from the Coronavirus Aid, Relief, and Economic Security Act signed into law late last month. It provides an estimated $4.9 billion for the state including $2.2 billion for Chicago and counties with populations over 500,000.

The city so far has spent $100 million on COVID-19 emergency response costs for equipment, supplies and quarantine and shelter sites and believes it’s eligible to receive more than $500 million in federal aid from CARES with its eligibility on other packages still under review.

The city maintains strong liquidity of more than $2 billion in cash to manage near-term costs, as noted by rating agencies. “We are not looking to draw down our reserves” and have flexibility with liquidity, Bennett said.

Bennett said the city is “taking a look at” at the Federal Reserve’s new Municipal Liquidity Facility “to see if it is something that we might be able to benefit” from but no decision has been made as there are questions on terms, rates and durations, though the Fed has been clear that it will only purchase municipal debt out to 24 months.

The Fed will purchase up to $500 billion of short-term notes, with the Treasury providing $35 billion of credit protection to the Fed using funds appropriated in the CARES Act.

No estimates were provided on the potential blow to the city’s economically sensitive taxes on sales, hotel stays, restaurants, and ride-sharing. “The situation remains very fluid” with respect to the full impact on the 2020 and potentially on 2021, Lightfoot said. “We won’t have a full picture on the impact until sometime after we really come out of it” and businesses begin going back on line.

January and February collections were tracking along budgeted targets, but the city is still assessing the March impact. Lightfoot cautioned that the news is not all bad as some sales and businesses are doing well and that could offset some of the decline. She reiterated her position that while the city faces an economic impact no one revenue stream accounts for more than 13% of the budget and economically sensitive revenues are under 25%.

Lightfoot said the city would continue pressing the state’s congressional delegation for further help that could offset tax losses. “Our hope is that” future package will be “specifically directed toward revenue losses,” Lightfoot said.

CARES and Chicago
Chicago preliminarily expects to receive $470 in direct relief for COVID-19 expenses from the CARES Act. The estimates were compiled based on criteria spelled out in the package but final allocations have yet to be decided by the federal government.

Congressional Democrats were pressing for additional state and local government funding in a fourth relief package being worked on Thursday.

“With the duration of the COVID-19 global pandemic still unknown, there’s no way to know what the full extent of the financial impact will be on our residents, our city and our budget. It is highly probable that additional federal resources will be needed to continue to combat the virus and address the economic toll it will have on our city, as well as those across the nation,” reads a city handout.

The Chicago Transit Authority is projected to receive $800 million to assist in the response to COVID-19 form the $25 billion allocation in CARES for transit. The Chicago Public Schools anticipates receiving $205 million from CARES. The Chicago Housing Authority expects to receive rental housing assistance funds and the city’s airports are still working to assess their allocation on CARES $10 billion airports allocation. There is another estimated $56.6 billion of funding available to states and municipalities across the country that the city may be eligible for but that’s still under to review.

Chicago has seen its spreads sharply widen as liquidity-driven outflows rocked the market in recent weeks and warnings of a deep downturn have shone the spotlight on weaker-rated credits such as Chicago. The city is rated at the speculative grade level of Ba1 by Moody’s Investors Service, BBB-minus by Fitch Ratings, BBB-plus by S&P Global Ratings, and A by Kroll Bond Rating Agency.

The city’s 10-year in a January sale landed at a 105 basis point spread.

The city is operating on an $11.65 billion all-funds budget that includes a $4.5 billion corporate fund.