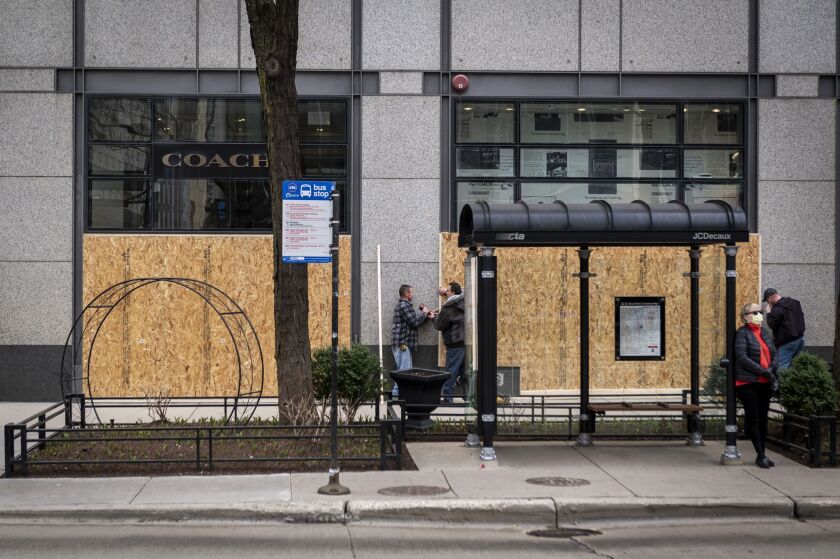 The coronavirus pandemic continues to take a rating toll on Illinois as Moody’s Investors Service Thursday revised its outlook to negative from stable.

The revision affects Baa3-rated Illinois general obligation debt and sales tax backed Build Illinois bonds, which are already on the lowest investment-grade rating. Also shifted to negative are the junk-level Ba1 ratings on Metropolitan Pier and Exposition Authority and Civic Center debt that requires a state appropriation to free up funds for debt service.

The action followed a similar move last Friday by S&P Global Ratings, which assigned a negative outlook to its equivalent BBB-minus rating.

Moody’s acted the same day the University of Illinois’ Institute of Government and Public Affairs published a grim assessment of the revenue losses the state could suffer.

The worst case is a $28 billion revenue hit between 2021 and 2023 based on data that looked at the impact from the 2007-2009 recession and national models on the pandemic to discern the potential impact on the state’s income and sales taxes that are the three major sources of corporate fund revenues.

The state’s ratings are low investment grade, but the bond market is pricing them as high yield: spreads on the state’s 10-year GO paper stood at a new peak 381 basis points to the Municipal Market Data’s AAA benchmark on Thursday, up from a 298 bp a week ago.

“Moody’s expects the coronavirus pandemic and its economic consequences will exacerbate the state’s financial challenges and test its resiliency relative to other states,” its analysts wrote.

While many states have reserve cushions to help weather the pandemic’s fiscal toll, Illinois’ rainy day fund is miniscule and its unfunded pension tab of $137 billion and 40% funded ratio demand rising contributions.

The state had cut it unpaid bill backlog, which had risen to more than $16 billion in 2017 due to the two-year budget impasse, but it’s been rising after starting the new year at $6.3 billion and Thursday stood at $8.3 billion.

Analysts said they expect the pandemic will reduce tax collections and likely cause substantial current-year pension investment losses, both of which weigh more heavily on Illinois. Illinois has reported 16,422 positive COVID-19 cases and 528 deaths, including 1,344 new cases and 66 deaths announced Thursday by Gov. J.B. Pritzker’s administration.

“The state will face liquidity pressures that may lead it to near-term actions such as adding to its balance of unpaid bills. The state is also more likely to take actions that add to long-term liabilities, in view of impending revenue shortfalls, growing health and social burdens and pension fund investment losses,” Moody’s warned.

Federal government relief will ease some of the fiscal burden on the expense side as the state is in line to receive about $2.7 billion from the March 27 CARES relief package.

Moody’s acknowledged that the final toll on the economy and budget are far from clear due to uncertainty over federal help, pension investment fluctuations, and questions over how prolonged a recession the nation will experience.

The rating on Build Illinois bonds incorporates a statutory allocation of state sales tax revenue to the program. The program benefits from strong coverage but the rating is linked to the state’s credit. The bonds are secured and repaid by taxes on hotel stays, car rentals, restaurant meals and other touristic transactions in Chicago.

“This makes the pledged revenue directly vulnerable to the bans on public interactions imposed to combat the coronavirus pandemic,” Moody’s wrote. A state pledges of sales taxes backstops the bonds. The Civic Center program bonds also carry ratings below the GO bonds because annual legislative appropriation is needed for debt service payment.

Factors that could drive a downgrade include the enactment of measures that greatly add to the state’s near or long-term liabilities, large or persistent structural imbalance that leads to significant increase in the state’s unpaid bills or other liabilities, and reduction in pension contributions to provide fiscal relief.

Pritzker has warned that his proposed fiscal 2021 budget faces a major re-write but has not outlined potential tax losses. He has said the state needs federal help beyond what is in the federal CARES bill.

Illinois has a stay-at-home order in place through April with all but essential businesses shuttered.

“The state of Illinois is committed to working through the difficult challenges brought on by COVID-19. The state prioritizes its debt payments and will ensure we stay on track through this crisis,” budget and finance spokeswoman Carol Knowles said in a statement about both the S&P and Moody’s actions.

The analysis came from a task force that includes four dozen interdisciplinary faculty experts from the university system who are examining the fiscal, workforce and community impact of COVID-19 at the request of U of I President Tim Killeen.

In the case of a severe downturn followed by a weak recovery and a severe pandemic, the state could lose $28 billion in revenue between 2020 and 2023. Pritzker has proposed a $42 billion general fund for fiscal 2021. His plans rely on passage of a graduated income tax by voters in November to raise about $3.6 billion in new revenue annually.