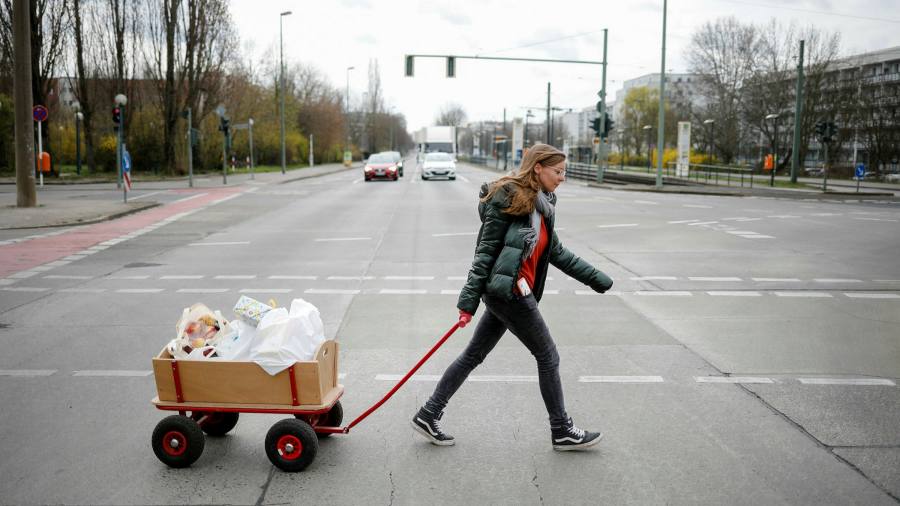 The German and French economies are in the grip of historic recessions as the coronavirus crisis is set to wipe out many years of growth in only a few months, according to forecasts published on Tuesday.

Germany’s economy will shrink almost 10 per cent in the three months to June, according to the country’s top economic research institutes, the sharpest decline since quarterly national accounts began in 1970 and double the size of the biggest drop in the 2008 financial crisis.

The shutdown of vast swaths of economic activity to contain the spread of the pandemic is knocking 1.5 percentage points off French growth for every two weeks that it continues, the Banque de France warned on Wednesday. After more than three weeks in lockdown, French economic output is expected to have fallen by the sharpest rate since the second world war, the central bank said, forecasting that gross domestic product contracted 6 per cent in the first three months of the year.

For every week in confinement in March, French business activity dropped by about a third, the central bank said. The decline in the French economy is set to be of a similar scale to the second quarter of 1968 when gross domestic product fell 5.3 per cent because of the impact of a student-led protest movement.

Lockdowns to deal with coronavirus have frozen many businesses and forced most people to stay home, plunging the leading economies of Europe into freefall. Governments in Berlin, Paris and other European capitals have launched vast programmes to provide hundreds of billions of euros in support for businesses and workers whose incomes have been hit by the slowdown.

“In Europe right now we are doing a huge fiscal stimulus . . . as GDP is collapsing, incomes are stabilised,” said Philippe Martin, economics professor at Sciences Po in Paris. “Right now those incomes are being saved so saving rates are skyrocketing in Germany, France, Spain. The question is what do we do with that once the crisis ends? It is very uncertain.”

The scale and speed of the shock that coronavirus has dealt the global economy was shown in OECD data published on Wednesday, giving the strongest signal on record that major economies have gone into recession.

The Paris-based organisation said its index of composite leading indicators — designed to identify turning points in the economic cycle — recorded its biggest drop on record in most major economies in March, reflecting the immediate impact of lockdown measures on production, consumption and confidence.

But the OECD warned that because of the uncertainty over how long lockdown measures would last, Wednesday’s figures could be taken to reflect only the current situation, not how long or how severe the contraction in activity would last.

Germany’s economy is expected to shrink 1.9 per cent in the first quarter and by 4.2 per cent this year, the country’s top five economic institutes said in a twice-yearly study for the government. But they forecast it would rebound next year with growth of 5.8 per cent.

“Up to now the positive part of the German economy has been services but this crisis will obviously hit services harder than manufacturing, as industrial production has continued more than retail or services, which have mostly just stopped,” said Carsten Brzeski, economist at ING in Frankfurt.

The crisis is expected to increase the number of unemployed people in Germany by 236,000 to 2.5m, pushing the jobless rate up from close to a record low of 5 per cent to about 5.5 per cent. That would remain well below the jobless levels of many other eurozone countries; the bloc’s overall unemployment rate recently hit a 12-year low of 7.4 per cent.

“Germany is in a good position to cope with the economic slump and to return in the medium term to the economic level that it would have reached without the crisis,” said Timo Wollmershäuser, head of forecasts at the Munich-based Ifo Institute.

Berlin’s response to the crisis will push the country into its first budget deficit for several years, equal to 4.7 per cent of GDP, the five institutes forecast. This would increase public debt from close to 60 per cent of GDP to 70 per cent.

Both Germany and France entered the coronavirus crisis with already-weakening economic conditions. Germany narrowly avoided a recession last year as its manufacturing industry was hit by the US-China trade war, while France’s economy contracted in the final quarter of last year when it was disrupted by strikes and protests.