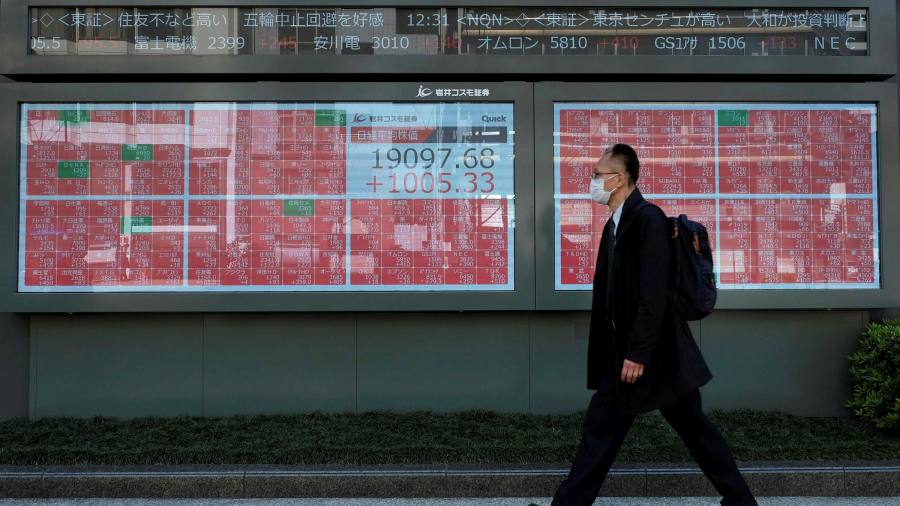 Global stocks rallied on Monday, as investors welcomed signs that measures to contain the coronavirus pandemic were starting to bear fruit in some of the worst affected countries.

The virus has shown signs of peaking in continental Europe, as the daily death toll in Italy, Spain and France slows. Signals that some governments will consider easing lockdowns imposed across much of the continent have also raised hopes that economic activity could begin to resume in the medium term.

Still, Deutsche Bank strategist Jim Reid advised caution and questioned whether western economies will be able to quickly break free from the restrictive measures put in place to slow the pandemic’s spread.

“Overall global new case growth and fatalities are slowing but are they slowing quickly enough to work out when economies can reopen?” Mr Reid wrote in a note to clients.

S&P 500 futures tipped the Wall Street benchmark to rise 3.6 per cent when the US opens for trading, while Asian markets recorded strong gains.

Vice-president Mike Pence said the US was seeing “glimmers of progress” in terms of the outbreak, while New York State reported its first daily drop in new cases since the outbreak began.

However, Andrew Cuomo, the state’s governor, warned it was too soon to tell if the number of cases had peaked in New York. The US surgeon general earlier warned that the coming weeks would prove to be “our Pearl Harbor”.

A sense of optimism spread through markets despite evidence that the virus is plunging the global economy into its sharpest recession since the Great Depression. In response, regulators have freed up about $500bn of capital for lenders around the world to help them absorb the impact of the Covid-19 pandemic, according to calculations by the Financial Times.

Japan’s benchmark Topix and South Korea’s Kospi both added 3.9 per cent on Monday, while Australia’s S&P/ASX 200 gained 4.3 per cent. Hong Kong’s Hang Seng was up 2.3 per cent, while markets in mainland China were shut for a public holiday.

Equities reached higher even as oil prices slipped on doubts that Saudi Arabia and Russia could quickly reach a deal to reduce global crude supplies.

Brent crude, the international oil benchmark, fell 0.6 per cent to $33.90 per barrel while US marker West Texas Intermediate dropped 3.6 per cent to $27.33 a barrel.

Both benchmarks earlier fell as much as 12 per cent after Riyadh and Moscow traded barbs over the weekend. The latest disagreement raised concern that a potential agreement to cut supply and put a floor under prices that have been hit by a falling-out between the two producers may not be forthcoming.

It is “clear that tensions between the Saudis and Russians are still high, and both are playing a blame game over who was behind the failure of the Opec+ meeting in early March,” said Warren Patterson, head of commodities strategy at ING.

In the currencies market, the pound traded flat at $1.2265, having slipped in Asian trading after UK prime minister Boris Johnson was admitted to hospital on Sunday for precautionary tests, still suffering from coronavirus symptoms 10 days after testing positive for the virus.

Mr Johnson has continued to run the government despite appearing to be unwell in some of his video messages.