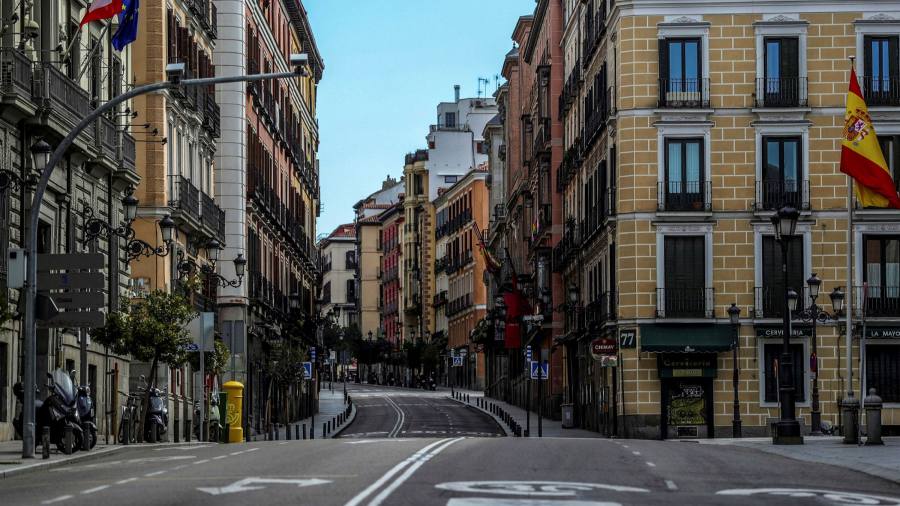 Governments across Europe have begun preparations to ease the lockdowns imposed across much of the continent to contain the coronavirus pandemic, even if restrictions that have paralysed the economy are expected to remain in force for several more weeks.

France, Spain, Belgium and Finland are among many countries that have set up expert committees to examine a gradual easing of stay-at-home orders for some businesses and schools while avoiding a second wave of infections that could overwhelm health services.

Pedro Sánchez, the Spanish prime minister, on Saturday extended the shutdown of his country for another two weeks until April 26 but he said a ban imposed last month on all non-essential work including manufacturing and construction would be lifted after Easter.

“When we have the [infection] curve under control, we will shift towards a new normality and towards the reconstruction of our economy,” Mr Sánchez added. “A specific team of epidemiologists has been working for two weeks now on a plan to restart economic and social activity.”

Angelo Borrelli, head of Italy’s Civil Protection Agency which is in charge of co-ordinating the national response to the outbreak, suggested a “phase two” of the country’s lockdown could begin next month.

“I don’t want to give dates, but between now and May 16 we may have further positive data that suggests we can resume activities and then start phase two,” he said.

Édouard Philippe, the French premier, said last week that the process of “deconfinement” had no precedent and would be “fearsomely complex”, adding: “We are probably not heading for a deconfinement that would be absolute everywhere for everyone.”

Denmark, which was one of the first countries in Europe to shut down activity and close its borders, last week became the first to put a timetable on the loosening of restrictions.

“If we Danes for the next two weeks — beyond Easter — continue to stand together, at a distance, and if the numbers remain stable and reasonable, then the government will begin a gradual, quiet and controlled opening of our society again,” Prime Minister Mette Frederiksen said on March 30.

Few other governments are willing to put a timescale on the loosening of restrictions not least because, according to most experts, it will require a massive increase in testing capacity. Many also worry about undermining the stay-at-home message with the onset of the Easter holidays and warmer weather and with populations already chafing at weeks of confinement and the loss of earnings.

Germany, where the daily rate of confirmed coronavirus cases and deaths has risen in recent days, has also begun preparing what one official called a “phase-out” that would be “acceptable in terms of health policy”. “But we’ve been careful about what we say in public,” he added.

“The important message now is: we are not in a phase of the pandemic where we can tell people the measures can now be relaxed,” Steffen Seibert, spokesman for German chancellor Angela Merkel, said on Friday. “Of course you can prepare for that mentally, but for the moment it’s this [stay-at-home] message that matters.”

However, some experts believe it is a big mistake for governments not to engage the public in a debate about loosening restrictions.

“Although it is clear we cannot talk about when the opening up will take place, we can talk about how,” said Christiane Woopen, professor at the University of Cologne’s Centre for Ethics, Rights, Economics, and Social Sciences of Health and a scientific adviser to the government of North Rhine-Westphalia, Germany’s most populous region.

“The public deserve it. They are taking a lot of hardship. They have to trust what political leaders are doing in the next months.”

Prof Woopen is one of a dozen academics — epidemiologists, physicians, lawyers and economists — who published a report on Friday for the Munich-based Ifo economics institute. The report is an attempt to frame what Prof Woopen calls an “opening strategy, not an exit strategy”, since there is unlikely to be any return to normality before a reliable vaccine against Covid-19 becomes widely available, which appears several months away.

A separate Ifo study predicted the German economy could shrink by up to 20 per cent this year if the shutdown lasted three months and was followed by only a gradual recovery. Prof Woopen and her fellow authors said social and psychological strain was as important to alleviate as the loss of output.

The Ifo report argues for a “risk-adjusted” strategy whereby some age groups, regions and social and business functions can resume activity before others. Schools could begin lessons, given the lower risk of severe symptoms in children and the burden of closure on working parents, but older people and high-risk groups may remain cloistered for months. Highly automated factories could start up but nightclubs would be at the back of the queue.

These changes will require huge shifts in organisation. Denmark and Belgium, for example, are considering splitting classes and the school week in two, to allow for better social distancing.

Any loosening of restrictions would have to be accompanied by a ramping up of testing, said Martin Lohse, professor of pharmacology at the University of Würzburg, and another of the Ifo report’s authors.

Even Germany’s extensive testing — it was conducting 50,000 a day last week — is insufficient given its population of 80m, he said. Antibody testing would also be indispensable even if none of the tests being trialled around the world was so far deemed accurate enough. And governments needed to boost production of protective equipment as the wearing of face masks becomes more widespread. France for example is now considering making face masks mandatory in public.

A differentiated loosening of restrictions would inevitably be more confusing for the public than the stay-at-home instruction, Prof Lohse admitted. “Transparent communications helps. Telling people the truth about difficult choices but also the hopes makes a real difference.”