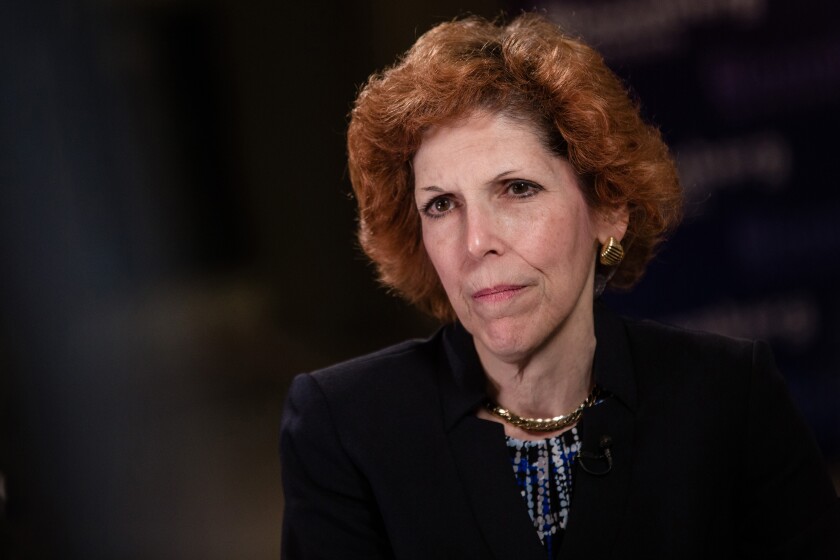 Federal Reserve Bank of Cleveland President Loretta Mester said U.S. unemployment could rise as high as 15% as the U.S. forcibly shuts down important parts of its economy to help contain the coronavirus pandemic.

About 10 million Americans lost their jobs over the past two weeks, based on initial jobless claims reported Thursday — far exceeding forecasts. The numbers mean unemployment may already be approaching 10%, nearly matching its peak following the financial crisis of 2008-09, as fallout from the contagion ravages the labor market.

“I was anticipating that in the first half of the year we were going to have some really bad numbers, and seeing that number today just confirms how bad it is,” Mester said in a telephone interview with Bloomberg News.

“You don’t like to see those numbers because it means people really are impacted by this,” she said. “It will take some time to get it back down, and we’ll see a big hit to output growth in the second quarter because we’ve shut the economy down.”

The U.S. central bank is racing to prepare additional emergency programs, on top of the six it has already announced. One, the Main Street Lending Program, will aim to deliver loans to small-and-mid-sized businesses.

Mester said she couldn’t provide any more information on the timing or details of the program.

“People and businesses need aid now,” she said. “I can tell you we understand the sense of urgency and the Fed is working as quickly as possible.”

Mester was even more careful when asked when the Fed might introduce a facility to purchase debt issued by cities and states. The recently passed congressional aid package instructs the U.S. Treasury Department to implement a program aiding states and municipalities. Many expect the Treasury will do so by backstopping a Fed lending facility.

“This is another one of those things we’re working on to see what it makes sense to do,” she said.

“We can do some things, perhaps, at the Fed to make sure the markets are working, but I think the direct transfers to state and local governments will come probably from the Treasury,” she added.

Concern over market disruption, particularly in the Treasury market, prompted Mester to dissent on March 15 when the FOMC voted to slash its benchmark interest rate by 1 percentage point close to zero.

“The illiquidity was really affecting any kind of hope for transmission of a monetary policy cut” at that point, Mester said. “Also there was social distancing going on, which meant any kind of rate cut wasn’t going to spur activity.”

She said there’s been progress in restoring market liquidity, “but I still think that’s where our focus really has to be continuing.”

Mester, who was director of research at the Philadelphia Fed during the financial crisis of 2008-09, said she hasn’t found herself shocked by anything that’s unfolded over the past month.

“I find it very depressing that we are in this situation, but I guess I’ve been buoyed by the fact that this is really an all-hands-on-deck situation,” she said. “There really is a sense of everyone working together to get through this shock that no one anticipated.”